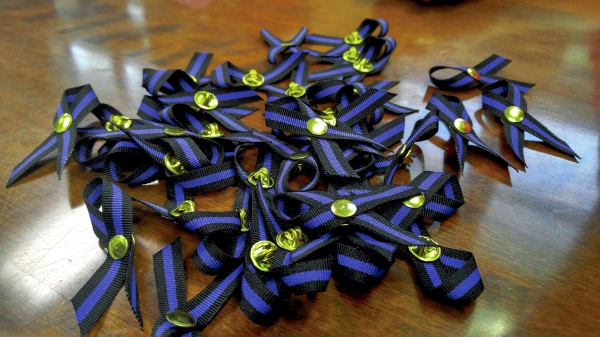 The Rowan office received 100 blue and black ribbons, which are available for a $5 donation. Brackeen was shot in the torso Sept. 10 while serving a warrant on Irving Fenner Jr. Brackeen died two days later.

Rowan Sheriff Kevin Auten said he received a letter this week from David Teddy, a Shelby attorney with Teddy, Meekins & Talbert. Teddy, along with Sheriffs Alan Cloninger in Gaston County and Alan Norman in Cleveland County, are working to raise $50,000 for the Brackeen family.

“You can’t replace what he meant meant to them, but you can help with a potential burden,” Auten said.

He said the money could help the Brackeen family with any immediate expenses.

“Even if everybody does a little, it will have a big impact,” he said.

Auten said he commends the law firm and sheriffs for their efforts to help the family. He said it’s a great idea and one he wanted to support.

“Our firm has been so moved by the impact of Tim’s death and his loss on his family, his town and the entire law enforcement community, that we have decided to take action…,” the letter said.

The ribbon campaign began with homemade black and blue ribbons that were distributed to law enforcement in Shelby and then beyond in Cleveland County. The law firm is now close to distributing 10,000 ribbons.

For more information about the ribbon program at the Teddy, Meekins & Talbert law firm, contact them at 704-487-1234.