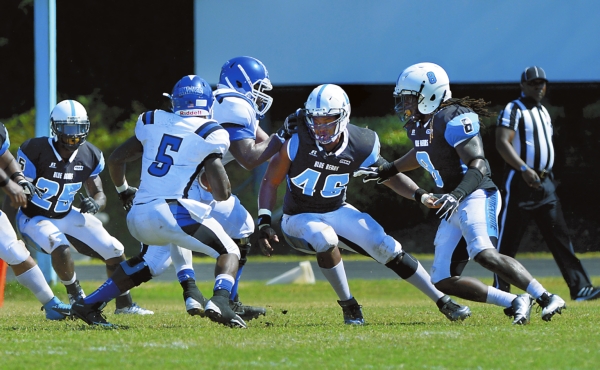 SALISBURY — When Livingstone linebacker DeMarcus Nolan returned an interception 55 yards for a touchdown last season against J.C. Smith, he said later that he “housed it.”

The struggling Blue Bears (1-3) need Nolan to take another one to the house this Saturday at Virginia State. The game in Petersburg, Va., kicks off at 6 p.m. and Livingstone is hoping to avoid an 0-2 start in the CIAA.

“I still see great things for this team,” Nolan said at Monday’s press conference. “We’ve just got to come out with high intensity and play like we practice. It’s never too late to turn things around and getting a win this week could be the start of great things.”

Nolan, a senior from Knoxville, Tenn., is definitely a leader on defense and knows the unit needs more consistency. The Blue Bears were solid on defense in their two road games but yielded a lot of yards and points in two home games.

A transfer last year from Arkansas Baptist Junior College, Nolan is only in his third season playing linebacker. But’s he been a quick study and leads Livingstone in tackles with 32, including 3.5 tackles for loss and a sack.

“I’ve always been more of a defensive guy, ever since I started playing football,” said Nolan. “Tackling is what I do, something that I like to do. It’s fun and exciting.”

Head coach Daryl Williams says that Nolan has definitely made an impact at Livingstone.

“DeMarcus came in as a junior college player and he’s become a leader on the defense,” said Williams. “I would like him to become a little more vocal at times but he’s done a tremendously good job for us. On the field, he’s always ready to hit somebody and is a sure tackler. Off the field, he’s a good role model and good student — on track to graduate. He’s 100 percent into the program.”

“He brings a lot of energy and runs fast to the ball,” Keiling said of Nolan. “He’s getting better and better at linebacker after playing a lot of rush end in JUCO ball. He’s got a lot of natural ability, so we’ve been working on the little things to help him play even faster.

“We’re helping him to get his pass drops down better and in spring ball, he had a lot of interceptions,” continued Keiling. “The energy DeMarcus brings, you can’t teach it … he’s really a natural. Now, we’re working on fine tuning the little things to help him be even better, like the run-pass reads.”

Williams and Keiling are both happy that Nolan is finally healthy. He battled shoulder and ankle injuries last season but still earned honorable mention All-CIAA honors.

And it’s not a surprise that Nolan, a Baltimore Ravens fan, tries to emulate the playing style of Ray Lewis, one of the NFL’s all-time great linebackers.

“I want to fly to the ball but you have to remember your assignments, too,” said Nolan. “As long as you come in and watch film, it shouldn’t be a problem. I do play a lot on instinct but after watching the film on an opponent, you know what’s going to happen and you just have to react.”

While Lewis may have been Nolan’s football role model, DeMarcus Nolan Sr., his father, “keeps that extra step in me. He has been a big part of my life. He calls me almost every day to see if I’m going alright.”

Nolan Sr. is a barber in Knoxville and has already taught his son a thing or two.

“Yes, I’ve learned some things from him and guys around here are always calling me, wanting me to cut their hair,” said Nolan.

A business administration major, Nolan does want to start a business some day, not a barber shop, he says, but in the major sporting goods industry.

Before his days as a businessman begin, Nolan is hoping there’s a lot more football. With three of his 2015 teammates playing in different professional leagues, that thought is also in his mind.

“I’d like to play at the next level, but I’ve got to finish this year strong to help the team and then I’ll think about that later,” he said.

Keiling believes that Nolan has that kind of ability.

“Like I said, DeMarcus is a natural,” said Keiling, who played linebacker himself at Concord University in West Virginia. “Everything looks like it’s coming together for him but and we’re hoping to keep him healthy as he focuses on the finer points of the linebacker position.”

Nolan said that he’s glad he chose to transfer to Livingstone and has always felt welcomed by the community, especially after the death of his mother, Teresa Ligon, in 2014 at the young age of 41.

“They show a lot of love around here,” said Nolan. “It’s been good, like a second home. It’s just not as big as Knoxville.”

NOTES: The Blue Bears will live Friday for Petersburg … Williams said that red-shirt freshman Xavier Longerbeam will start his second straight game at quarterback. In last week’s 41-13 loss to Chowan, Longerbeam completed 61 percent of his passes for 138 yards, but more importantly, threw no interceptions. Longerbeam, a transfer from Florida A&M, was the fourth starter in as many games for Livingstone last Saturday.