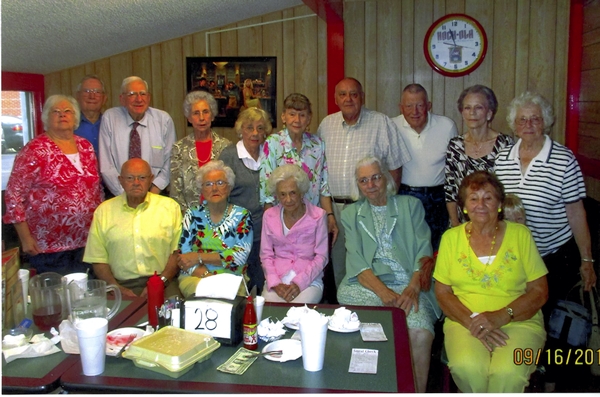 The Rockwell High School Class of 1951 held its 65th reunion

The Rockwell High School Class of 1951 held its 65th reunion on Sept. 16 at Hendrix BBQ on West Innes St.

Darline Kesler welcomed the classmates and the Rev. Carl Fisher gave the invocation.

After the meal, a decorated cake in class colors was served and classmates enjoyed fellowshipping with each other.

No date was set for another reunion.

On Wednesday, Sept. 14, Chief Jerome Stokes was invited by adjutant Abe Daniels to speak at J.C. Price American Legion Post 107 during our regular meeting, the purpose of which was to “get to know each other, to connect, to collaborate and create  with Post 107 a new vision and a plan of action to improve our post and our neighborhood.” (Westside Citizens)

The chief discussed the status and direction of the department. There are 14 department vacancies and he expounded on his concept of “community policing.” He also informed the group that the SNAG meeting formerly held at the police department will alternate between the department and Brenner Crossings to hopefully include better community access. The chief also discussed   the unsolved murders, the shootings and gun violence. He reported that he has enlisted outside sources to assist the department in operational strategies. He suggested  several community strategies,  building trust between community and police deptartment, the Post offering an after-school mentoring program (In 1999, Post 107 ran an at-risk school for five years, partnering with Livingstone College) referral of potential eligible policemen and increased community accountability.

The meeting was proactive in creating solutions to our challenges. “We have made significant inroads toward more effective ways to improve our safety  and increase visible protection,” said Chief Stokes.  It was noted that chairman Gary Hall and his committee  are continually reviewing our security policies and have implemented further safety recommendations .

In closing, Charles Harrell, public relations officer said, “Post 107 is calling on all veterans to join in our quest along with Chief Stokes to improve our neighborhood. We need  your help, now, to save our neighborhood. Let us work  with the police department on being good neighbors with openness and transparency. To be better veterans … come join us. We need your input, we need your membership.” Call 312-617-0540 or 704-640-8077 for more information.

Fundraisers are used to generate monies to award annual scholarships to graduating seniors at high schools in Rowan and Stanly counties.

During the retreat, a breakout session was held for each committee, where members brainstormed, planned and  created shadow boxes to give the chapter insight into how the Five Point Program of economic development, educational develpment, internatinal awareness/involvemetn, physical nd mental helath and plitical onvolvemnt will be implemented.

The Internationa Awareness and Involvement committee reported they will partner with the community and local churches to sponsor an Internatinal Day, bringing awarenessof the famiies nad school age children in our city from other countries who have sotires to shaer of their e xpereinces here in the United States.

Membership Services was the commettee hosting this year’s retreat. Natalie Rivers, chair, and her committee provieed an assortment of b reakfast foods and lunchwas catered by Chick-fil-A.

Doctor Who will be parking his TARDIS at the…