Gotta Run: Another young runner gets a big win 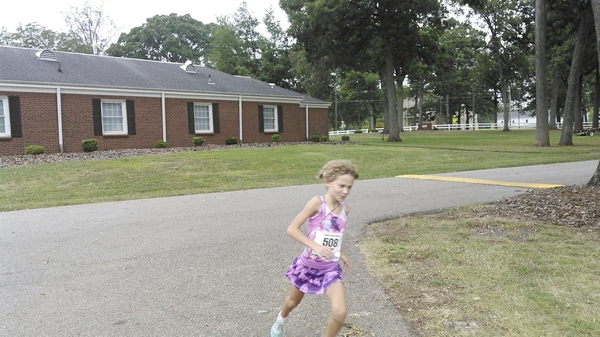 Emberleigh Pauley-Brown turns toward the finish of the Nazareth Children’s Home 5K on Sept. 17. Emberleigh was the overall winner. Photo by Richard Taylor

Last Saturday’s Nazareth Children’s Home 5K was a fun event for several reasons. Participants got to run on a cool, shady course through the woods on the fabulous trails at the East Rowan YMCA. This is a great run to enjoy no matter what the pace.

For me, this 5K was special for another reason. Running is rewarding at any age, and the county’s youth are starting to serve notice of more great things to come. Great youth programs like the YMCA Warriors of Kevin and Ester Marsh and tutelage from running parents keep the pipeline rolling. One young runner served notice that she is serious about her running and has tremendous potential.

I drove a Gator as the lead vehicle for the race along with Vernon Walters of Nazareth, and we got a special treat. Additionally, I have been around running and racing for a long time and often predict the winner of a race ahead of time. More times than not, I am right, and such was the case on Saturday.

At the start, 10-year-old Emberleigh Pauley-Brown went to the front and sized up her competition. After a mile, the race came down to an ongoing battle between Emberleigh and 48-year-old Rusty Smith. Rusty kept it tight, with Emberleigh winning by 13 seconds in 24 minutes and 57 seconds. She opened most of that lead in the last tenth of a mile. Rick Johnson was a close third in 25:13.

Now, here is the thing about Emberleigh. When she finishes a race, she has this huge smile as she sprints to the finish. Emberleigh always flashes this smile at the end no matter what her place. Called MB by her parents, she said, “Getting this win was amazing and life changing. It was so cool to be first. It was fun to follow the Gator and have no one in front of me. I want to do it again. My best so far had been a third place in Salisbury’s Share the Care 5K.”

MB went with her mom and dad to the Hospice 5K in Winston-Salem in 2013 to do her first fun run. She told her mom that the fun run was too short and she wanted to do the 5K, and she has done just that since 2014. A student at Isenberg Elementary, MB competed with the Warriors in track at distances of 800 and 1,500 meters and will move up to the 3,000 meters next year. Currently, she runs cross country with the Warriors.

I don’t remember seeing a very good runner of any age enjoy themselves as much as MB does. When asked about the benefits of running, she said, “Running makes me happy. When I am running, I feel like nothing else is happening in the world. I am totally concentrating on my run. Running makes me feel good inside, like I have done something amazing. If I had a bad day, running makes me feel better.”

Her hobbies include crafts, drawing, singing, dancing and going to water parks and the beach. On top of all of this, MB enjoys using hand tools to build things.

Her mom is Suzanne, and sisters and runners are Sara and Rachael. Dad Jeff is a runner, too, and says, “I can’t keep up with her. She never gets tired.”

As you might imagine, MB has some lofty goals for the future.

“I want to get a college scholarship and then make a career out of running,” she said. “I want to go to the Olympics multiple times and travel the world.”

My prediction is that we are going to see plenty more first place finishes in Emberleigh’s future.

We skip a couple of weeks locally with no races scheduled again until the 3rd Annual VAEA 5K on Oct. 8 on the VA complex. That race has worked out the bugs from the first year and will build on the success of last year’s event as VA officials honor all military veterans and specifically those from the Air Force.

As always, visit www.salisburyrowanrunners.org for a listing of local events.