Walk of a lifetime: At a personal crossroads, Kyle Shores hikes the Appalachian Trail 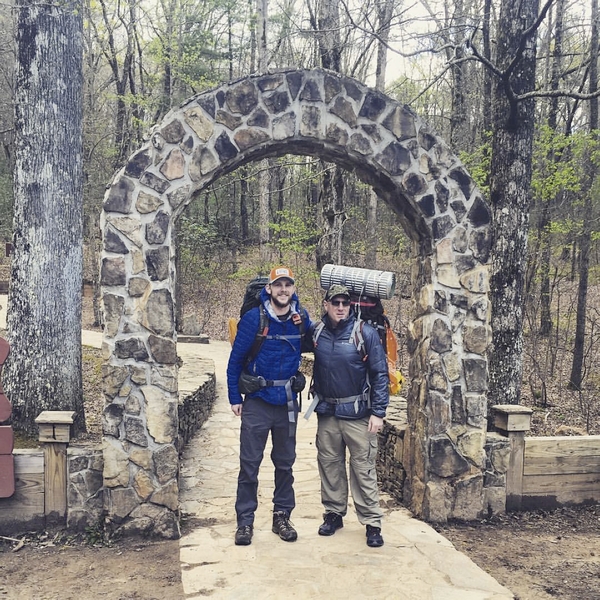 Each year, about 2,500 to 3,000 individuals attempt to hike the Appalachian Trail from Georgia to Maine in one big gulp, but fewer than a thousand complete the trip, according to the Appalachian Trail Conservancy. It’s a life-changing adventure for those who make it and for many who don’t.

Kyle Shores of Salisbury was at a time in his life that he needed something, although not quite sure what it was. His marriage was ending, and he had just quit his job.

“I was not a huge reader, but I couldn’t put it down,” 26-year-old Kyle said. “The story was about a hiker whose wife had died of cancer. I began to look for more books and did my research online. I was fascinated with YouTube videos about the AT.”

In late November, Kyle mentioned the idea of hiking the AT to his parents, Monty and Lisa Shores. They thought Kyle was serious enough that they bought trail hiking Christmas gifts, including yet another memorable book called “Appalachian Trails.” Kyle sealed the deal by applying for and winning a Badger sponsorship that provided some high quality gear.

A Facebook post made the idea public by early March and shortly afterwards, Kyle quit his job as an insurance underwriter.

“I knew it was short notice, and I was sorry for that, but I was on the trail two weeks after my last day of work,” he said. “My dad decided to hike the first two weeks with me, and we headed for Springer Mountain, Georgia.”

The Shores kicked off the adventure on April 8 with plans for Monty to hike with Kyle into North Carolina.

“I had decided to dedicate my hike to my grandfather, Paul (Tommy) Shores, who was a symbol of determination and strength to me,” Kyle said. “He had a stroke and had to relearn how to walk, but then finished a 26.2 mile marathon. I carried his race bib with me.”

Monty and Kyle hiked together through Georgia, a tough state according to Kyle. They found the up-and-down hiking to be really strenuous.

“I tried to not think about the long term at that point,” Kyle said. “I didn’t know how far I would go. My dad did great, and I was so proud of him.”

Carrying a pack that weighed about 35 pounds instead of the much heavier packs of others, Kyle began the serious part of the hike once Monty headed home. He was usually up at by 6 a.m. and pushed on until just before dark. Kyle met three other hikers and spent a day rafting near Nantahala. Out of that meeting, the four men spent time alternately hiking together.

All AT hikers get a trail name, and Kyle’s became “Headshot.”

“I got the name because I just simply walked into a tree!” Kyle said. “Two of the other guys had names of Mowgli and Chaco. I ended up hiking with Chaco all the way to the end of the AT.”

Days came and went with forever memories made daily. Kyle remembered a few rough times that were trying at best.

“The toughest day was in the White Mountains. I had a dull and persistent stomach pain. It was raining, and I was physically weak,” he said. “I slipped on a boulder on Kinsman Mountain, New Hampshire, and fell face first close to 10 feet. The pack just drove me into the ground. It was just an accumulation of mental and physical challenges that made it a forgettable day.”

Another tough day came in Virginia during the toughest week of the journey. Kyle had been suffering from severe shin splints for about 100 miles.

“I couldn’t stop, but every step was miserable. I hiked with tears,” he said. “It was near Bland, Virginia, and part of what was a stretch called the Virginia Blues. We camped in an old fair ground in waist-high grass and white-tailed deer screamed their alert calls right outside the tent. I was just fed up with everything!”

The next day, Kyle received a package with new shoes and was reminded of advice to not quit in the first month.

“I didn’t quit the first month and after that, I just kept taking it a month at a time,” he said. “A through-hike is just like banging your head against a wall over and over.”

Long fascinated with the wild and mountains. Kyle saw 11 bears, two rattlesnakes, a moose and plenty of mice in trail shelters. Bears were most common in the Shenandoah Mountains and were often seen at dusk. One bear pulled a pack from a tent and another actually bit a hiker a few days after Kyle’s group passed through.

While there were many trying days, the good ones often made all the tribulations worthwhile.

“The best day was when we were camping in the Roan Mountains in North Carolina,” Kyle said. “There had been storms overnight and there was a huge blanket of clouds with the sun rising behind them. The sight was breathtaking and left me speechless. I knew then why I was doing this.”

Possibly the most memorable day was when Kyle signed his divorce papers in Moosilauke, New Hampshire, at a UPS store.

“It was an odd time to be away from family and friends,” he said. “I had to rethink where I was in life. But I was doing something that only a few people had done, and I was doing it for me.”

The longest day on the trail covered 31 miles. The longest time without a shower was eight days, but the hikers never felt clean, even after a shower. One resident who gave them a ride to town from the trail said, “My God, you all smell like crap!” Kyle already had a beard, but it thickened considerably along the trail.

On the trail, Kyle ate a lot of pop tarts and ramen noodles, and he craved ice cream. Friends and neighbors of the AT often did things that are commonly referred to as “trail magic.” One group offered a reunion-style spread of food while coolers were often left along the trail with goodies for the hikers.

Kyle and Chaco reached the summit of Mt. Katahdin, Maine, on Sept. 7 after 2,190 miles of hiking. The hikers covered the trail in 150 days, with an average of 16 miles a day, not counting rest days.

“The through-hike on the AT was the first time I tested my own human will,” Kyle said. “It was all about knocking down walls. I felt like I can do anything, but it was a long, hard process. People were good to us.”

“But this time, I will be careful to make the right choice. I want to do some more distant hikes, maybe the John Muir Trail or the Continental Divide. There will be a marathon in my future too, another life-changing event,” he said. “But I will never eat a pop-tart again!”