Appalachian St. is ready for ‘The U’ 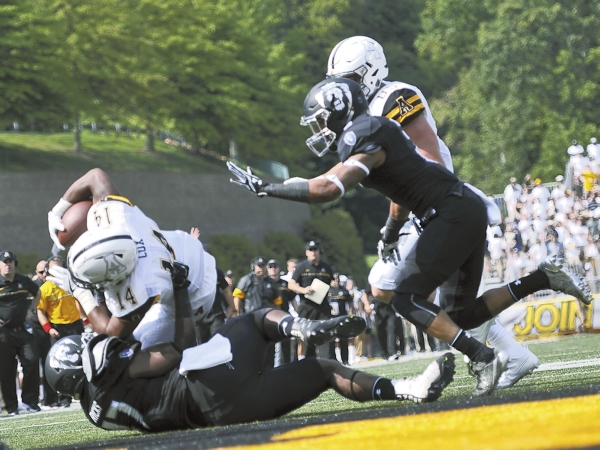 CORAL GABLES, Fla. (AP) — For No. 25 Miami, simply getting to Appalachian State is going to be a challenge.

Winning may prove even tougher.

The Hurricanes (2-0) will fly into a regional airport that can’t accommodate a full-size jet, so Miami will take a smaller-than-usual plane. As such, some support staff got bumped from the charter for commercial flights. And then there’s lodging issues; a long ride awaits the players from the airport to their hotel 20 minutes from Appalachian State’s campus in Boone, North Carolina, while school officials and cheerleaders will stay even farther away.

Those are mere inconveniences.

The real test comes Saturday at noon, when the Hurricanes face an upset-capable opponent and what will be a frenzied crowd.

Make no mistake, this is a very big game to App State (1-1), a team that won 11 games last year and nearly beat Tennessee to open this season.

Adult tickets are usually $40 for Mountaineers home games; they were priced at $60 for this one, and they’re going for much more than that on the secondary markets. App State added a standing-room student section that will put some on field level, a premium seating area also at field level, along with another video board.

A sellout is certain; every ticket App State had was gone about an hour after they went on sale. Extra planning was done in an effort to figure out how to minimize traffic problems on game day. There’s even going to be a pep rally on Friday night with two bands, food trucks and appearances by App State coach Scott Satterfield and some players.

Fans have been excited for months. Now App State players can join in the fun.

“Throughout the offseason, everybody’s like, ‘Man, you play Miami at home,’” Appalachian State quarterback Taylor Lamb said. “And we’re like, ‘Yeah, we’ve got two games before that.’ … Now all our focus goes to Miami.”

It’s the first time App State has played host to an opponent from one of college football’s five power conferences, and is something that Satterfield called “a milestone for our university.” The game was scheduled last year when Miami needed to fill an opening, and the Hurricanes had to agree to head to Boone first to get what will become a home-and-home done.

App State is a program that won three straight FCS national titles from 2005 through 2007 — the last of those championship years starting with an unforgettable win at Michigan.

“How can you take this team lightly? How could anybody that knows football take this team lightly?” Richt said. “We don’t even have to say that to our guys. They see the film. They watched them play against Tennessee. They know … this is a really good football team, everybody knows it, and we’re geared up to try the best we can to play great that day.”

It’s a huge test for the Hurricanes, who are making their first road trip under Mark Richt and are going into what figures to be a very rowdy atmosphere with the biggest crowd in Appalachian State history expected. For the Mountaineers, it’s a chance to get a win that would generate the type of attention they haven’t seen since that stunning upset of Michigan in 2007.

Miami’s linebackers vs. Appalachian State RB Marcus Cox. Shaq Quarterman, Michael Pinckney and Zach McCloud are about to see the biggest challenge of their young careers, and the Miami trio of true freshmen have to keep Cox in front of them. Cox averages over 100 yards rushing per game in his App State career.

Miami: QB Brad Kaaya has struggled at times so far this season, with a couple of would-have-been TD passes sailing high. Then again, the Hurricanes — with 108 points in the season’s first two games — haven’t exactly needed Kaaya to be razor-sharp yet. They will on Saturday, and if Miami’s running game stays crisp Kaaya will benefit greatly.

Appalachian State: LB Eric Boggs is elite, with more than 100 tackles last year and 24 already this season. He’s the leader of a defense that has given up 27 points in two games.

Miami RBs Mark Walton and Joe Yearby have both topped 100 yards in each of the season’s first two games. They’re the only teammates in FBS to have back-to-back 100-plus games to start this season. … App State added field-level seating and a second video board for this game, which the school has spent months prepping for. … Richt may become the third Miami coach since World War II to start 3-0 (others: Larry Coker and Dennis Erickson). … App State is 18-3 in its last 21 games. … Neither team has trailed in regulation this season; App State’s loss to Tennessee came in overtime.