With a win under their belts, Blue Bears take on Davidson 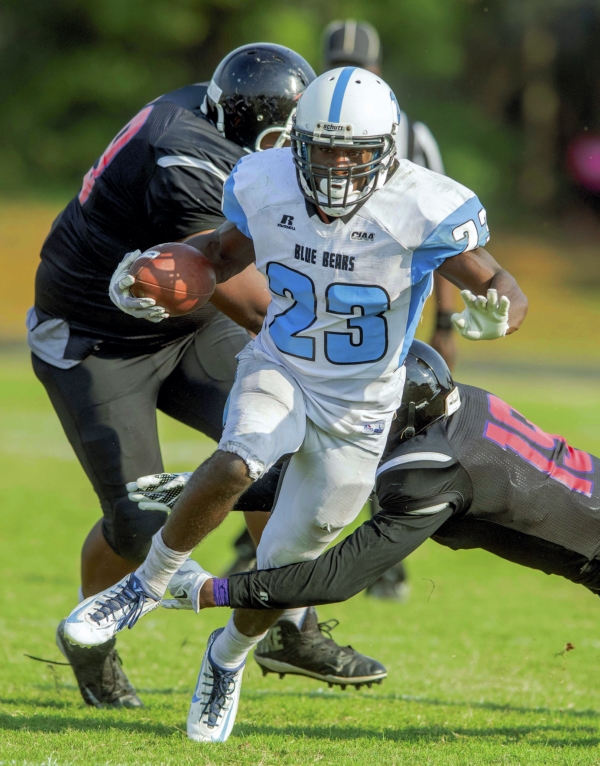 SALISBURY — Livingstone junior running back Jarius Richardson made a mistake in the season opener that made him determined to rebound in last Saturday’s home victory over Edward Waters College.

The Blue Bears lost their opener, 5-3, on Sept. 3. The winning points came off a safety just before halftime and while Richardson had nothing to do with the offense being pinned at the one-yard line, he did have something to do with what happened next.

Richardson couldn’t get out of the end zone and the Tigers took a two-point lead.

“The safety was my mistake, all on me,” said Richardson. “I tripped, and the your own end zone is a not a place you can afford to trip. That was eating at me all week.”

For last Saturday’s home opener, Richardson lost his starting job to Latrell Flowers (12 carries, 58 yards). But when he got his chance, Richardson made the most of it. He came off the bench to rush 23 times for 150 yards and consecutive touchdown runs of 15, 26 and 20 yards.

Those scores were the key in the Blue Bears’ 31-28 win over another set of Tigers from Edward Waters.

“The offense had a good week of practice and the line play was better than the first week,” said Richardson. “I just had to hit the holes because the offensive line made some. That first week, I didn’t play good. I just wanted to play better last Saturday.”

The win even the Bears’ record a 1-1 and although head coach Daryl Williams thought it would be 2-0 at this point, there is still plenty of optimism going into Saturday night’s game at Davidson.

“Anytime you can get a win, it’s big,” said Williams about last week’s victory. “In any season, the first touchdown and the first win are the hardest to get. Once you get that, everyone gains some confidence. But that being said, we won a game that we’re supposed to win, and in fact, we are supposed to be 2-0 at this point but we’re not.”

“We had 13 penalties the week before and we cut that down to only five last Saturday, which is a vast improvement,” said Williams. “We still had two or three dropped balls but the offensive line played better. We did not tackle well as a defense and that’s a major concern that we’re going to address this entire week. Edward Waters had 33 pass attempts and we only had one sack and not many hurries, so we’re also going to address our pass rush defense about staying in their lanes.”

Red-shirt freshman quarterback Thaddeus Bell, in his first collegiate start, was 19-of-32 for 196 yards and touchdown pass to Spencer Ludin. However, he did throw two interceptions, his third in two games.

Dallas Bruton, another red-shirt freshman who started the Benedict game, has thrown two interceptions as well.

“Overall, Bell still has to get better on his decision making,” said Williams. “There were a couple of times that he should have pulled the ball and ran, but that’s going to come with time and experience. He’s just a 19-year-old. It’s part of the growing pains, but overall, he did play pretty well.”

After the offense mounted a 31-14 lead against Edward Waters, the defense did allow two scores to make things interesting in the fourth period.

Senior linebacker DeMarcus Nolan had 11 tackles for the second straight game for the Blue Bears. Livingstone had 10 defensive pass breakups against the Tigers, three from safety Danny Robinson.

This week, Livingstone will try to get to 2-1 against Davidson, an FCS non-scholarship program. The Wildcats, also 1-1, lost to Georgetown (38-14) in their first game and then defeated Kentucky Wesleyan (35-21). The 7 p.m. game on Saturday will be Davidson’s home opener.

“We’re going to step up a level and see how our talent-level and coaching ability matches up to theirs,” said Williams. “I know their coach will have his team prepared and we’ll be ready to go, too. It has a little different feel as it’s our first time playing a 1AA (FCS) school since I’ve been here, so we’ll see how it all works out.

“Davidson’s got some big guys and are pretty sound on defense,” continued Williams. “I think we’ll be evenly matched and we’re really looking forward to it. We’re going back on the road and trying to gain some confidence by playing well and winning a game on the road.”

NOTES: After Davidson, Livingstone begins CIAA play at home on Sept. 24 against Chowan. “I like the way our schedule is set up,” said Williams. “We’re being challenged and tested early and Davidson should be another tough, physical football game, as all of them will be.” … Williams said the Blue Bears’ plan just a day trip to Davidson … it will be the first meeting ever between the two schools … by far, Everett Ransom is the leading receiver after two games with 13 grabs for 166 yards. … Ludin is next with seven catches for 53 yards … Richardson’s stats were corrected on Monday after an error was discovered on Saturday’s box score. Richardson was inadvertently given a 62-yard loss instead of a “no gain” on one his attempts. The adjustment took his rushing total on Saturday from 88 yards to 150 … Richardson is Livingstone’s male athlete of the week — volleyball player Rukiya Garland is the female athlete of the week.