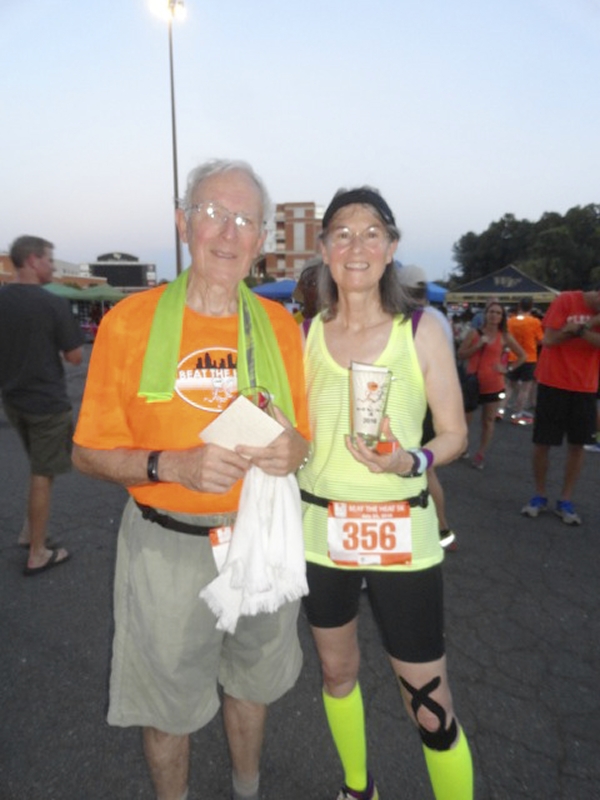 George and Elizabeth Kimberly at the Beat the Heat 5K in June, when it was 95 degrees at 7:30 p.m. Submitted photo

I first met Elizabeth Kimberly when she took one of my early running classes. Libby said, “Taking the beginning runners classes not only provided me with a training schedule and the skills to avoid injury, but the other runners encouraged and motivated me. I made many friends from that experience and continue to make many more from the running community.”

Since that time, Libby has completed in 163 races, including five half marathons, two 25Ks, a double of a 5K and a 10K and many other 5Ks. She is pretty sure that her best race was the Shamrock 5K in 2014, where she placed first in her age group with a time of 27 minutes and 57 seconds. That was also her best year of running races, which included 25 total events.

Libby’s husband George is a retired physician and an avid racewalker. George said, “I tried to be a miler in school but was not. I did like to walk and then one day at the gym, the former Senior Games director told me I ought to be a racewalker. I didn’t know what that was.”

George has been racewalking for 16 years, since the age of 67. There are not many racewalking events, so George has entered up to 25 events a year that are billed for runners. He said, “I found that I can walk faster than most guys in the Senior Games. The technique and rules are a challenge, and there are judges on the course that can disqualify the racewalker.”

George would rather participate in sports than watch them. He added, “Racewalking is something one can do from youth and on through their entire life. Walking is simple, cheap and a fun way to maintain one’s health.” George completed the Sunset Run 5K in 43 minutes and 17 seconds.

When asked about the health benefits of running, Libby said, “I don’t run for a longer life, I run for a stronger life. Running provides the weight-bearing exercise that prevents osteoporosis, which runs in my family, and also encourages good balance that helps prevent falls later in life. But there is something about racing … to me it is thrilling. The races support organizations or charities to raise funds for very important services, so more good comes from it besides the health benefits.”

In the recent Sunset Run 5K, Libby won the grand masters division with a time of 30:24, topping more than 40 percent of the overall field. She now runs as many days as possible. “If I don’t run, I get aches and pains, and my energy level drops. I may get in a bad mood.”

Libby, now 68, advises, “Don’t overdo it at first. Make sure you have the right shoes. Join a beginning running class because it is a good place to make friends and learn what you need to know to stay healthy.

For those interested in following Libby Kimberly’s path to improved fitness, the next Beginning Runners Class locally kicks off on Tuesday, Sept. 13, at Novant Health Rowan Medical Center at 6 p.m. Fitness professionals provide their expertise to teach running form, proper shoes and equipment, nutrition, injury prevention and stretching and strengthening. Each participant gets a training schedule, individual coaching, a T-shirt, entries into a 5K race and the Salisbury Rowan Runners for a year. The cost remains at $65. The series of classes are sponsored by Novant Health, Salisbury Parks and Recreation and Salisbury-Rowan Runners. Call 704-310-6741 or 704-202-6601 to hold your place.

Nazareth Children’s Home hosts the next race locally with their 5K Run/Walk on Saturday morning, Sept. 17. The East Rowan YMCA trail system will be utilized for the course. Join us for another fun and rewarding event. Call Cheri Peterson at 704-279-5556.

More information on the beginning runners class and upcoming races can be found at www.salisburyrowanrunners.org

And one last item. Both Michelle Patterson and Jennifer Payne have had a series of unrelated health issues during August. A full update on their wellness adventure will return at the end of September. Both are improving and starting to get back on track. Michelle actually participated in the Sunset Run 5K.

See you next week!