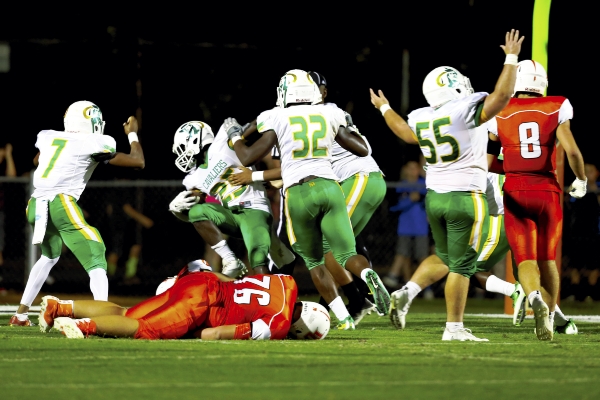 James Sipes/For the Salisbury Post ... North Rowan defensive back Victor Lyles fights his way into the end zone after intercepting a pass against Davie County on Friday night. It would be the Cavaliers’ only score in a 7-6 loss.

MOCKSVILLE — It might be as good a defensive battle as you’ll see. Both offenses averaged less than three yards per play, but man, were the defenses on fire in Davie County’s 7-6 win over North Rowan.
North Rowan’s Victor Lyles returned an interception 11 yards to give the visiting Cavaliers a 6-0 halftime lead over Davie County last night at War Eagle Stadium. Broc Barnette blocked the extra point, which would loom large in the end.

Davie’s freshman running back, Adrian Cranfill, finally found a seam in the North defense and scampered 24 yards for a game-tying touchdown in the third quarter, and Jared Griggs’ extra point proved to be the difference in the win for the War Eagles.
While North coach Ben Hampton bemoaned missed opportunities for his 3-1 team, Davie, also 3-1, will take it on a night when it played without quarterback Chris Reynolds (ankle) and receiver Cooper Wall (cracked rib).

Backup QB Ben Summers (shoulder) was also out, so junior Josh Hall was the trigger man in a tough assignment.
“To line up without (Reynolds and Wall) … hey, we put a lot on other people to make it happen,” Davie coach DeVore Holman said. “(Hall) had a pretty good game for us.”
The first half was a fierce battle of field position. With Davie backed up at its 4-yard line, Hall went over the middle. But Lyles picked him off at the 11, then weaved and broke tackles on his way to the end zone with 9:25 left in the half. Barnette broke through the middle to block Joe Harrison’s point-after kick.
“That’s a kid who happened to be in the right spot at the right time, and (Lyles) fought through arm tackles and finally punched it in,” Hampton said.
Davie had first down at the North 22-yard line late in the first half. Hall looked for Beau Byerly on a corner route, but Keith Carroll went high to reel in a gorgeous interception in the end zone.
“Phenomenal play,” Hampton said. “Defense made plays to keep us in it.”
The Cavs led at halftime even though they had no first downs and 41 total yards, partly because they were ahead 2-0 in the turnover department. Davie had nine first downs but couldn’t finish drives, trailing despite a 37-16 advantage in plays.
Jalen Redmond and Cody Hendrix’s tackle for losses forced a North three-and-out to start the second half. On third-and-1, Cranfill sped 24 yards over right side to finally put Davie on the board with 7:14 left in the third. Griggs’ kick made it 7-6.
“We knew Davie was good defensively,” Hampton said. “We felt like we were pretty good defensively. We’ve said for the second year that defense is the backbone of this team. But you can’t defend turnovers, and we can’t have dropped balls. When you get opportunities, you can’t pass them up because you don’t know when the next one’s going to come. Too many dropped balls and too many turnovers, and it came back to bite us in the end. We shot ourselves in the foot, one play after another.”
After Davie’s Barnette had a tackle for minus-8, Matt Nesbit blocked a punt to set Davie up at the North 31. North’s defense, though, stood tall and Griggs missed a 45-yard field goal.
North fumbled on first down and Cody Hendrix recovered at the North 18. But Davie went backward and had to punt.
North was 0-for-7 on third down and Corbin Smith had completed one pass before he found Alonzo Sirleaf for 31 yards to the Davie 40. Unfortunately for North, it fumbled on the next play and Davie’s Jack Little recovered.
Four minutes later, Davie muffed a punt deep in its territory but the return man managed to recover it at the Davie 8. Griggs got off a clutch 51-yard punt to the North 38.
Davie’s relentless defense came through again. First Hendrix destroyed a screen pass, resulting in an 8-yard loss. Two plays later, lineman Spencer Wilson hit Smith from behind as he released the ball and safety Hite Merrifield intercepted at the North 49.
Davie couldn’t get a first down and had to punt, setting up the Cavaliers’ last gasp at their 9. Jayden Jones snapped off a 14-yard run, followed immediately by an 18-yarder.
That’s when Davie’s defense settled the issue for good. Barnette stopped Jaleel Webster for a 1-yard gain. A short pass to Desmond Gray only gained a yard. Merrifield knocked away a pass. On third down, Hendrix sacked Smith for a 5-yard loss. On fourth-and-23, Hampton reached into his bag of tricks and called a hook-and-lateral. It had big-play potential, but the exchange from receiver to trailing receiver was mishandled and ruled incomplete.
Davie went to victory formation to kill the remaining 52 seconds. It was the War Eagles’ lowest-scoring game in seven years (3-0 loss to Alexander Central in 2009), and it was their lowest-scoring win in nine years (3-0 over North Forsyth in 2007).
The Cavs averaged 2.7 yards per play and finished with 123. They had three turnovers, all in the second half. Davie’s offense did not dazzle, but it found away against a North defense that showed its own heart and toughness. Davie averaged 2.9 yards per play and finished with 174. Griggs was crucial, pinning three of his six punts inside the North 20. Cranfill picked up 83 hard-earned yards on 24 carries. Hall completed four passes for 67 yards, and added runs for 13, 8 and 7 yards.
North’s top ground gainer was Jones with 56 yards on 10 carries — 32 of it coming on his final two runs.
“We knew we were going to have to play great defense and win the special teams to be successful tonight,” Holman said. “The offense scrapped for everything they could get. But it’s a three-unit deal, and when one unit is a little bit weak, the other two have to step up.”