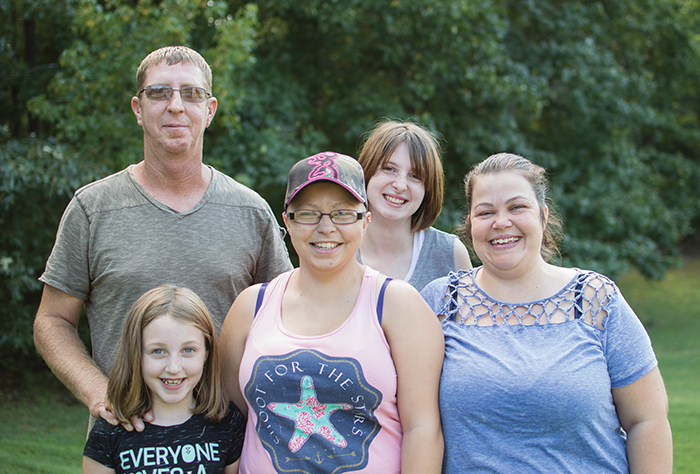 Josh Bergeron / Salisbury Post - 19-year-old Danielle Wilkes, center, has been diagnosed with a rare form of cancer. Her family first found out about Wilkes cancer in April and is currently hoping to raise money for medical procedures and find a doctor that's willing and able to remove the cancer. Here, Wilkes is pictured with her mother, father and two sisters.

CHINA GROVE — Danielle Wilkes was sitting next to her mother after a day at work when she suddenly felt a sharp pain that would alter her life forever.

On that April day earlier this year, Wilkes’ family would take her to an urgent care facility in Kannapolis. Urgent care staff would tell Wilkes that they were unable to find the cause of the pain, but the family demanded more testing, according to Wilkes’ mother, Julie Parham. Further tests would reveal a mass on Wilkes’ right side.

Once the mass was found, doctors sent Wilkes, a 19-year-old, to a nearby hospital. Doctors there would deliver a diagnosis that compounded existing problems. In weeks prior to the urgent care visit, Wilkes had been hospitalized because of blood clots in her lungs. Tests conducted following the urgent care visit would reveal that Wilkes had a rare form of cancer called adrenocortical carcinoma.

After months of trying to navigate the health care system to find a cure, the family is now fighting against time as the cancer spreads throughout Wilkes’ body.

“We’re all aware that she may not live much longer, but we are praying that she does and praying that we can find someone who can perform the surgery she needs,” said Wilkes’ grandmother, Frances Parham.

Wilkes’ medical records show that doctors first discovered a mass on her side two years ago. It was small at the time, but Julie Parham, her husband Terry and other family members say they were never told the mass existed. If the family had known about the small mass then, it could have been removed with a significantly less complicated procedure than the one required now, Wilkes’ father Terry Parham said.

Wilkes is receiving chemotherapy that has helped with the cancerous mass on her right side. Meanwhile, veins of the cancer have grown into an artery that’s attached to the heart — the vena cava.

Members of the Parham family say they’ve spoken to doctors at Carolinas Healthcare System, Duke Cancer Center and St. Jude’s. At each stop, they were told the required procedure — open heart surgery — would be too complicated for doctors at the facility.

Wilkes’ health remains a concern even if a doctor can be found, said Frances Parham.

“We were told during the long recovery from the surgery she could not have chemo,” she said. “No one has come right out and said it, but we got the message that the cancer in the lungs may grow while she is recovering from the surgery, but we are willing to take that chance. If it continues to grow into her heart, her heart is going to stop and she will die.”

A benefit in her honor

Throughout the process, Julie Parham and her husband Terry say they’ve felt a range of emotions — anger, frustration and a number of other adjectives — but they’re grateful for the support Wilkes has received from her friends and the community.

On Saturday, VFW Post 8989 in Kannapolis will have a breakfast and poker run to raise money for Wilkes and her family’s medical expenses.

Stops on the poker run will include the Lucky Turn Around in China Grove, American Legion Post 106 on NC 801, Rockwell Amvets and the Samuel C. Hart Post 14 American Legion on South Main Street.

At the American Legion Hart Post — the poker run final stop — there will be a 50/50 raffle, a DJ, vendors, a yard sale and a cornhole tournament.

“Handling it better than we are”

Until April, Wilkes was working part time as a cashier at Porky’s while studying at Rowan-Cabarrus Community College to become an X-ray technician. She still works occasionally at Porky’s but dropped out of school after her health became an issue.

Despite her dire situation, family members say Wilkes has maintained a positive attitude throughout the past few months.

“To be honest, she’s handling it better than we are,” Frances Parham said. “I think it’s harder on us than it is on her.”

Wilkes graduated from A.L. Brown High School in Kannapolis in 2015. In high school, Wilkes said was part of a club called Students Against Violence Everywhere. She was also a member of the school’s color guard during her freshman year.

She said her favorite subject in school was anatomy and health-related sciences.

Wilkes says she likes cars, specifically old trucks. If given the choice between a brand new car and a rusted, decades-old truck, Julie Parham said her daughter would probably pick the latter.

The family asked that anyone who may be able to offer help in any way, including finding a doctor that can perform the necessary surgery, send an email to Frances Parham at franparham@aol.com