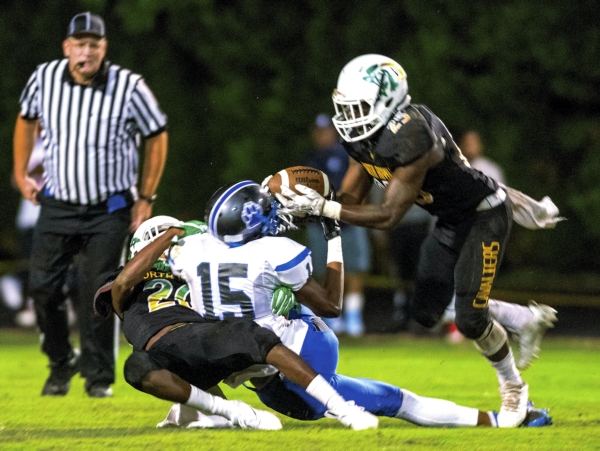 JON C. LAKEY / SALISBURY POST North Rowan’s Victor Lyles (25) takes the ball from Statesville receiver Izaiah Gathings (15) for an interception during the third quarter of last night’s game in Spencer. The Cavaliers scored with 30 seconds left to pull out a 27-23 victory.

SPENCER —The county’s only unbeaten team did everything in its power to stay that way Friday night.

North Rowan survived four turnovers and an offense that ran like a truck with flat tires, yet prevailed, 27-23, against visiting Statesville.

“It was ugly the whole time,” coach Ben Hampton said after the Cavs used a last-minute touchdown to secure their third victory. “We sputtered on offense, but our defense played a heck of a first half and kept us in it. We put our defense in some bad positions and they came up big for us.”

North won the game when quarterback Corbin Smith hit receiver Desmond Gray with a 4-yard swing pass for a touchdown with 30 seconds remaining. Statesville (1-1), which had two touchdowns nullified by penalties, threatened on its final possession but ran out of time with the ball near midfield.

“It was a crazy game,” said losing coach Randall Gusler. “Right up until the last play. We thought (quarterback) Jai (Hogue) was running for the winning touchdown, but they said we didn’t get the play off in time. Just crazy.”

North’s defense was led once again by Appalachian State commit Zion DeBose — the defensive end who spent the first half shedding blocks, barging into the backfield and terrorizing Hogue before sitting out the final quarter with leg cramps.

“We just had to stay focused on the game plan,” teammate Steven Thurston said. “As a defensive lineman, that last possession should have been a sack-fest. We knew they had to pass. But as a defense, it was all about preventing them from scoring.”

North opened a 13-0 first-quarter lead before consecutive turnovers helped Statesville draw within 13-9 at the half. The Greyhounds took their first lead late in the third period when senior running back John Mott took a handoff and Roto-Rootered his way for a 49-yard TD. That set the stage for the game’s second-most important play — Jaleel Webster’s 99-yard return for a score on the ensuing kickoff.

“Special teams was huge,” Hampton said. “It’s the second week in a row we’ve had a kickoff return for a touchdown that completely swung the momentum back our way. We put those kids back there and feel like there’s a chance they’ll take it to the house every time they touch the ball.”

Webster used a burst of speed to split Statesville’s defense and put North ahead just 18 seconds after the Hounds had taken the lead. “We set up the wedge,” he said afterward. “They kept their players mostly on the outside. I saw it developing, took advantage of the wedge and took off right up the middle.”

Smith completed 13 of 24 passes for 149 yards, but his second interception put Statesville in position to win. Hogue capitalized on the turnover deep in North territory when he lofted a 7-yard touchdown pass to Izaiah Gathings with 10:33 remaining, pushing the guests back in front, 23-19. “We still knew we had it,” Smith said.

The winning drive started on North’s 22-yard line with 3:29 to play. Smith completed short passes Webster and Alonzo Sirleaf before striking gold when wideout Dakerius Hoosier got open for a 46-yard pickup along the right sideline, giving the Cavs a first down on the SHS 14 with 1:33 on the clock. Five snaps and 63 seconds later, he lobbed a short pass to Gray — who was running a left-to-right, end around pattern behind the line of scrimmage. Gray snagged the ball and charged into the end zone.

“It’s one that’s been in our playbook for a while,” Smith explained. “We use it in goal-line situations and two-point conversions, but that was the perfect time to use it.”

So here’s North Rowan, 3-0 in your Saturday morning paper and scheduled to face Davie County (2-1) next week. “This is awesome,” Thurston said. “We always say if we can beat Statesville and Davie County, it’s going to be a good year.”

NOTES: DeBose was limping as he exited North’s locker room, but Hampton expects him to participate in practice this week. … The officials certainly earned their paychecks. Statesville was penalized 18 times for 172 yards and had two touchdowns called back. North was flagged nine times for 56 yards … former West Rowan head coach Scott Young was on the press box, part of the Statesville coaching staff … Young’s son, Bryant, saw some action at quarterback for the Greyhounds. He completed two of four passes for 23 yards.