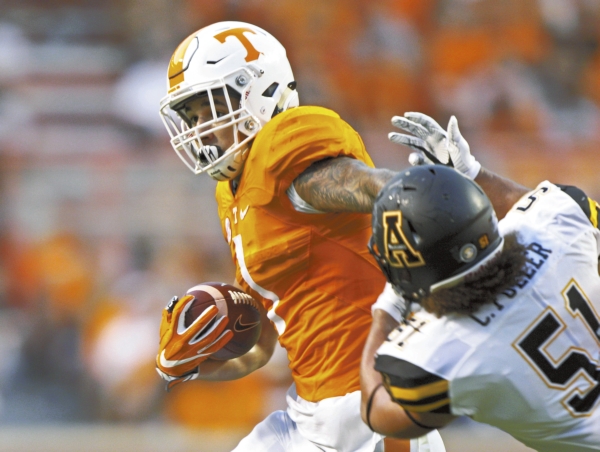 Tennessee faced third-and-goal from the 2 when Dobbs ran to his right and lost control of the ball as he tried to stretch his arms across the goal line. Hurd won the scramble for the loose ball in the end zone to give the Volunteers their only lead of the night.

Micah Abernathy ended the game by breaking up a pass into the end zone on fourth-and-5 from the 20.

Tennessee’s comeback prevented Appalachian State from producing another shocker nine years to the day after the Mountaineers stunned No. 5 Michigan in one of the greatest upsets in college football history.

The Vols tied it on Dobbs’ 67-yard touchdown pass to Josh Malone with 10:30 left in regulation. Appalachian State’s Michael Rubino, who earlier missed an extra point, was wide right on a 42-yard field goal attempt with 5:24 remaining.

Rubino’s miss wasted a 57-yard punt return by Jaquil Capel that gave Appalachian State the ball at the 28.

Tennessee entered the season with its highest ranking since 2006 after winning its final six games last year, but the Volunteers looked nothing like a Top 10 team Thursday. The Volunteers committed two turnovers and lost linebacker Jalen Reeves-Maybin to a targeting penalty in the first half as Appalachian State built a 13-3 lead.

Cam Sutton fumbled on a punt return and Appalachian State’s Alex Gray recovered at Tennessee’s 36 to set up the first touchdown, a 5-yard keeper from Taylor Lamb barely four minutes into the game. Appalachian State’s other touchdown came in the second quarter on a 33-yard completion from Lamb to Marcus Cox, who also rushed for 115 yards.

The Mountaineers had lost by at least 28 points in each of their six meetings with Power Five teams since that Michigan game, but they showed Thursday that they could compete with college football’s big-name programs. Appalachian State refused to get pushed around and kept Tennessee’s offense out of the end zone for the first 49 1/2 minutes.

The Vols vowed they weren’t overlooking Appalachian State and weren’t distracted by sky-high preseason expectations, but something was clearly missing Thursday. Tennessee didn’t bear any resemblance to the team that ended the 2015 season on a six-game winning streak.