David Freeze: Why I’m fired up again about my favorite old truck 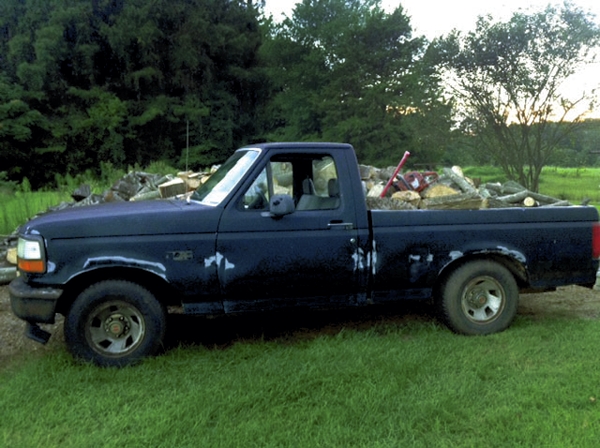 The green truck, just after it delivered another load of wood to the farm. Photo by David Freeze.

About six years ago, I realized that a special relationship exists between me and one of my farm trucks. At first glance, you might not understand why. There is a nearly new one here that is much nicer and has just about all the bells and whistles. While I love to drive that newer extended cab F-150, it is really the 1993 basic work model F-150 that holds my heart. I hope I can explain why.

I did buy this truck, sometimes referred to as “Ol’ Green” by others but never by me, when it was brand new just 23 years and 256,000 miles ago. Early on, it had a reasonably easy life. I drove it back and forth to work in Charlotte for years, then replaced it as my “nice truck” when I won yet another F-150 at Farmer’s Day in 1999. But the green truck didn’t complain as it became the farm workhorse. After all, it was built to work.

I started hauling gravel and wood, pulling a heavy tractor on a 16-foot Hudson trailer, and keeping it full of tools and equipment for multiple sporting events and nuclear holocaust supplies. You see, the green truck became my comfortable truck. I could do anything in it. It was driven most days while the nicer black truck stayed at home.

One cold winter night after a YMCA meeting in Salisbury, I was waiting at the stoplight at N.C. 150 and Sherrill’s Ford Road when a hit-and-run driver glanced off the car in front of me and then slammed into the green truck. The mirror was knocked off and some serious denting occurred from front to back on the driver’s side. The hit-and-run driver was never found but in one of the best procrastinating moves of my life, I had not removed collision coverage even though I intended to after 200,000 miles of service.

The highway patrolman on the scene told me that he thought the green truck was probably totaled.

“No, it can’t be,” I thought but a couple days later, I found that it was. But the funny thing was that I kept driving it. I found an almost matching junk yard mirror, then the same for the front left lights and the grill. Friend and mechanic Bradley Eagle made all of this happen.

Since the truck was officially totaled, the insurance company sent me a huge check, more than I expected because it was significantly beaten up even prior to the collision. But I wanted the truck! It could still do the work on the farm and it drove just as well as ever. I bought it back for next to nothing under a salvage title.

Bradley also had to put a used replacement transmission in it after the original one locked up hard near St. Paul’s Lutheran Church.

By now, you understand that the green truck has been a constant in my life for a long time. Long enough that two daughters went lots of places in it, and one even got to drive it briefly. Today I tried to add up how many wives rode in it, some that I really liked enough to still remember their names. Only one of the wives drove it but not too well. A couple of girlfriends did too, and one of them got the hang of it.

The truck has always been a babe magnet, so much so that another friend and neighbor, Robert Miller, was cautious about driving it from our hay fields. I told him to just avoid stopping and then the women will have a harder time jumping in. “Stop and you will have to deal with the result!”

This truck took me to countless races, some far up and down the East Coast, and to so many softball tournaments and other activities. Yet it still worked too!

Now for the rest of the story. The green truck had been off the road for most of the last two years, not totally, but let’s not discuss that. Then, another friend, Brian Jones, called with a great deal on getting free and already cut wood for our waterstoves. I had been missing the green truck and hadn’t driven it for months. I said, “OK, I am going to see if I can get it back on the road.” In one day, I got it started, inspected, added insurance and a new tag sticker, and the truck was on the road again.

The next day and this past Thursday, while I was driving home, the truck severely overheated and the engine shut off. After coasting more than 3/4ths of a mile into my nearest hay field, the truck smoked badly from the engine area for more than an hour. I consulted several friends, and we thought that the truck had probably breathed its last. I admit to including it in my prayers last night.

Right or wrong on the prayers, the truck started as usual on Friday morning, and after some minor repairs it delivered two more loads of wood home from Salisbury. It felt great driving along with my hand out the window resting on the mirror of my friend, the green truck.