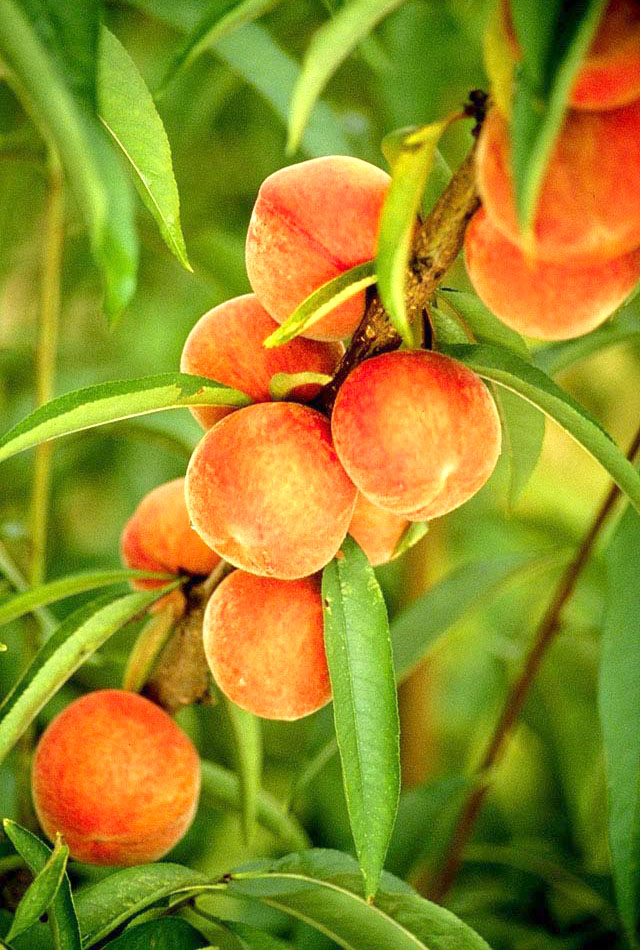 Cooperative Extension Though the peach crop here was hit hard by a late freeze, August is National Peach Month.

I just learned something new that I want to share with you all — August is National Peach Month. Who knew? I mean, I had no idea either but peaches have always been among one of my favorite fruits. Continue to read on to find out more about the history of peaches, selection, storage, uses, tips and nutritional benefits.

Did you know that peaches originated in China, where they have been cultivated since the early days of Chinese culture?  The peach was brought to America by Spanish explorers in the 16th century and eventually made it to England and France sometime during the 17th century.

Peaches are said to have been a regular item on the menu in Queen Victoria’s day, where a fresh peach was presented in a fancy cotton napkin. Various American Indian tribes are credited with bringing the peach tree across the United States. The method was simple, they took seeds with them and planted as they roved the country.

Although Thomas Jefferson had peach trees at Monticello, United States farmers did not begin commercial production until around the 19th century in Maryland, Delaware, Georgia and finally, Virginia.

China is the largest world producer of peaches, with Italy coming in second. California produces more than 50 percent of the peaches in the United States and grows 175 different varieties. Georgia is also a big peach producer and because so many peaches are being grown in Georgia, Georgia has become known as the Peach State.

When selecting peaches, chose peaches with firm, fuzzy skins that yield to gentle pressure when ripe.  The best sign of ripeness in a peach is a creamy or golden undertone, often called “ground color.” The rosy “blush” on a peach is not a good indicator of ripeness and differs from one variety to another. A fresh peach fragrance also indicates ripeness.  Avoid pieces of fruit with evident blemishes.

When storing peaches, store unripe peaches in a paper bag until they reach the desired ripeness (usually about two to three days).  Ripe peaches not immediately consumed or processed should be stored in a chilled area such as a refrigerator (32 degrees and high-humidity). It is best to use or process the fruit as quickly as possible since peaches are highly perishable under high temperatures and not well suited to prolonged cold storage (more than 14 days).

Peaches have high levels of antioxidants, which combat cell radicals that produce damage to body cellular structures. Peaches are high in calcium and also a good source of Vitamin C, which helps the body develop resistance against infectious agents.  Peaches are also low in fat, calories, and sodium and cholesterol free.

Peaches have a long history, which mirrors the many ways to enjoy this fruit. Peaches can be eaten fresh in salads, ice cream, cereal, pancakes or waffles and as a filling for pies, tarts, cobblers and strudels. They can also be grilled and served as a unique side dish with meat, fish or poultry. Peaches are available dried, frozen, canned, and as nectar, jam or jelly. Whatever you imagine, peaches can probably be included.

For information about peaches visit the website listed below:

Toi N. Degree is a Family & Consumer Education Agent for Rowan County Cooperative Extension.  You may reach me at 704-216-8970, or email me at toi_degree@ncsu.edu