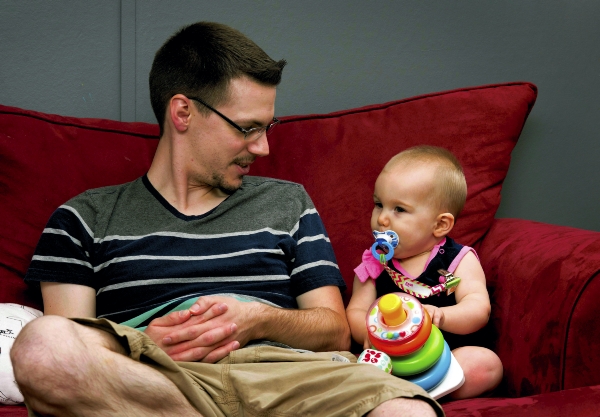 JON C. LAKEY / SALISBURY POST Kevin Blackburn sits on the couch with his 9-month-old daughter, Aria. Doctors found evidence of tumors on the back of Aria's eye.

KANNAPOLIS — Aria Blackburn is a ball of energy. She does everything you would expect of a 9-month-old little girl. She loves toys on the floor she can grab, hold and show to her parents.

Tired of crawling everywhere, she has started to pull up on furniture and people, anticipating the days when she will be running alongside her 4-year-old brother, Isaiah.

“She is thriving, despite everything she has been through,” says Aria’s mom, Krista Blackburn.

Aria has cancer, more specifically a cancer of the eyes called retinoblastoma. What makes Aria’s case a bit rarer is that hers is hereditary. Aria’s father, Kevin, had it, and also her grandfather, the late Chris Blackburn.

“My dad, then me, now we’re doing it again,” says Kevin, who lost his left eye because of the retinoblastoma when he was only weeks old.

With the genetics involved, there’s a 50-50 chance Aria’s own children will have retinoblastoma.

Isaiah happened not to have the gene mutation and was not at risk for the cancer.

So far, Aria has developed nine total tumors in her retinas. Looking into her eyes, which seem clear and active, you can’t see the tumors, but they reveal themselves as yellowish-white spots when a flash picture is taken.

That’s actually how parents sometimes first catch the disease, wondering what those spots are. Other symptoms are eyes that appear to be looking in different directions, redness and swelling.

Aria has bilateral retinoblastoma — five tumors in the right eye and four in the left. None have yet threatened the optic nerve, which would cost her sight. They represent a fast-growing, active cancer that if left untreated could spread quickly to other areas of the body, such as the brain and spine.

To try and calcify Aria’s tumors, doctors have employed six months of systemic chemotherapy, laser therapy and cyrotherapy, in which the tumors are frozen. Aria also has received IntraArterial Chemo, which administers chemotherapy directly into an eye via the femoral artery.

As you might expect, Kevin and Krista Blackburn talk about Aria’s cancer with the authority of doctors.

They know Aria can keep developing tumors for several more years until her retinas are fully developed. That usually happens around 5 years of age.

They talk in terms of dead tumors and active tumors. Up until now, Aria has responded to treatment and her tumors have been calcifying. With every examination, Kevin and Krista are hoping the tumors are dead or not growing and that no new tumors have shown themselves.

But it’s likely Aria will develop more tumors that need to be treated in the months and years ahead.

“She’s definitely not out of the woods yet,” Krista says. “We’ve learned to take the good news when it comes.”

Every four weeks, Aria, Krista and, depending on work schedules, other family members travel to Philadelphia — usually a Tuesday through Saturday trip.

At the Wills Eye Hospital in Philadelphia, they meet with Dr. Carol Shields, one of the top doctors in the country in dealing with retinoblastoma. She examines Aria and lays out the treatment regimen for the rest of the week.

Treatment days are usually Thursdays and Fridays and they can take place at the eye hospital, the Children’s Hospital of Philadelphia or at the Jefferson Hospital of Neuroscience.

The Blackburns usually return home on a Saturday.

To care for Aria and meet the draining travel demands of going to Philadelphia every four weeks, Krista has had to give up a job she loved at Cabarrus Women’s Center. The Blackburns depend on the health insurance Kevin has through his IT job at the Food Lion headquarters in Salisbury.

But the out-of-pocket expenses have been burdensome. The couple, strong in their Christian faith, have received considerable help from Crossroads Church in Concord — babysitting, groceries, love offerings, extra airplane tickets, clothing and prayers.

“We can never thank them enough for all the support they’ve given us,” Krista says.

Children’s Flight of Hope in Mooresville has been providing two plane tickets for each trip to Philadelphia.

The couple also have set up an online donation page for Aria on the YouCaring crowd-funding site. Its title is “Aria Blackburn —fighting rare eye cancer.” Krista posts updates on the family’s travels to Philadelphia for examinations and treatments and how Aria is doing.

In Philadelphia, the Blackburns stay at a Ronald McDonald House whenever possible, though often, when they first arrive, the place is full and they have to find a hotel for at least one night.

Meanwhile, on one income, the Blackburns try to keep up with their mortgage, car payment, student loan obligations and the expenses insurance doesn’t cover.

Still, Kevin knows better than anyone how fortunate he and Krista are that Aria is receiving the best treatment available and they have insurance to cover the major procedures.

Thirty years ago, his parents faced medical bills that over time totaled $1.25 million, as they dealt with Kevin’s fight against retinoblastoma. At the time, Chris Blackburn was pastor of an 80-member Baptist church he had founded in tiny Kalispell, Mont., and the nearest place Kevin could receive treatment was Seattle, Wash.

“My mom and dad lost the house and car twice,” Kevin says.

Kevin, 30, and Krista, 27, met while they were both working at an Old Navy store at Concord Mills.

One day, Kevin pulled out his prosthetic left eye and placed it on a stack of clothes Krista was folding.

“That’s an ice-breaker for sure,” Krista says.

The couple are college-educated — Kevin attended Liberty University; Krista, the University of North Carolina at Charlotte. After they married and the time came for having children, the couple knew the risks  — again, a 50 percent chance for their children to have retinoblastoma.

Some time back, Kevin’s blood was sent to a genetic lab to pinpoint the gene mutation he had for his retinoblastoma, so the couple had the specific gene marker against which they could test both Isaiah’s blood and Aria’s.

The positive result, showing Aria had the gene mutation, came back when she was two weeks old. At home with her baby, Krista started crying as she received the news.

On a Friday, Krista took Aria to a pediatric ophthalmologist in Kannapolis, and no tumors were identified on the little girl’s retinas.

But during the weekend that followed, Krista just couldn’t shake a feeling in her gut — call it a motherly instinct — that something was wrong with Aria’s eyes.

The following Wednesday, she and Aria visited the Cabarrus Eye Center in Concord, and three tumors showed up — two in Aria’s right retina and one in the left.

Aria was 22 days old, and Krista thinks that was her darkest day in this whole ordeal.

The Cabarrus Eye Center had experience in dealing with retinoblastoma — doctors there had seen it four other times. The Blackburns were put in contact with those families, and the decision was soon made to meet with Shields in Philadelphia.

Tammy Blackburn, Kevin’s mother, even called her son’s old doctor in Seattle to confirm with him that the Wills Eye Hospital in Philadelphia was a good choice.

The Blackburns say there are four leading cities for the treatment of retinoblastoma — Philadelphia, New York, Seattle and Los Angeles — and, when it came to their child, they wanted the best.

“We’re not going to have that regret,” Kevin says.

Krista adds, “When they said Philadelphia, we said ‘Let’s go.'”

By Nov. 18, 2015, little Aria, who had been born on Oct. 20, started her six-month regimen of systemic chemotherapy. “This reality is hard to swallow,” Krista wrote in a journal.

During initial examinations, Aria’s eyes had to be dilated and held open with metal tools so doctors could get a thorough look. That was the low point for him, Kevin says, remembering the first examination in Shields’ office in Philadelphia.

He had to be there while his little girl was being restrained and screaming because no anesthesia could be administered until she was at least four months old. Laser therapy was possible, for example, when anesthesia became an option.

For the latest tumor, Shields made an incision into Aria’s eye to treat it with cryotherapy. Dissolvable stitches were used on the cut, and Krista and Kevin had to keep antibiotic ointment on that left eye until it healed.

Over the months, to deal with the pain and side effects of treatment, Aria has had to take a lot of dosages of Tylenol — sometimes with codeine — along with acid reflux and nausea medicines. Through it all, she has kept her weight steady and been amazingly healthy otherwise.

She finished her systemic chemo on April 7.

Kevin and Krista know the fight Aria has ahead of her, but they find ways to count their blessings, especially when they sit in the oncology waiting room at Children’s Hospital of Philadelphia.

They see so many other children who are bald, relying on chest ports or feeding tubes in their noses and depending on wheelchairs.

Aria’s middle name is “Faith,” and her first name means “melody,” a nod to Kevin’s strong musician side.

Krista likes to say her daughter is “a faithful melody from the Lord.”

The dangers for Kevin and Aria continue for the rest of their lives. The Mayo Clinic says children with the inherited form of retinoblastoma have an increased risk of developing other types of cancers in any part of their bodies years after treatment.

Kevin and Aria have to have regular examinations to screen for other cancers. Kevin was neglecting those exams until Shields emphasized to him he had to be around for his children’s sake.

Kevin says the treatments given to his father back in the 1960s for retinoblastoma were “primitive” compared to those available today. In years past and even today, children would die of retinoblastoma without its ever being diagnosed.

Chris Blackburn, who died at 41, was given radiation that killed a lot of his bone marrow, Kevin says. It also left scar tissue behind his tumors, and Kevin believes that’s where cancer formed that led to his father’s death as an adult.

At her nine-month wellness check with her regular pediatrician, Aria passed with flying colors, not counting the retinoblastoma. For now the dark-eyed Aria is seeing fine and doing everything a 9-month-old should do.

She has a three-word vocabulary — “Mamma,” “Dadda” and “Bubba,” her name for Isaiah.

“Aria’s got a great prognosis,” Krista says, “and we hope it stays that way.”

There’s a determination in the light of Aria’s eyes.

Financial donations to help the Blackburn family with their ongoing expenses are being accepted through an online YouCaring page (youcaring.com). To find it, search for “Aria Blackburn.” Contact Mark Wineka at 704-797-4263, or mark.wineka@salisburypost.com.