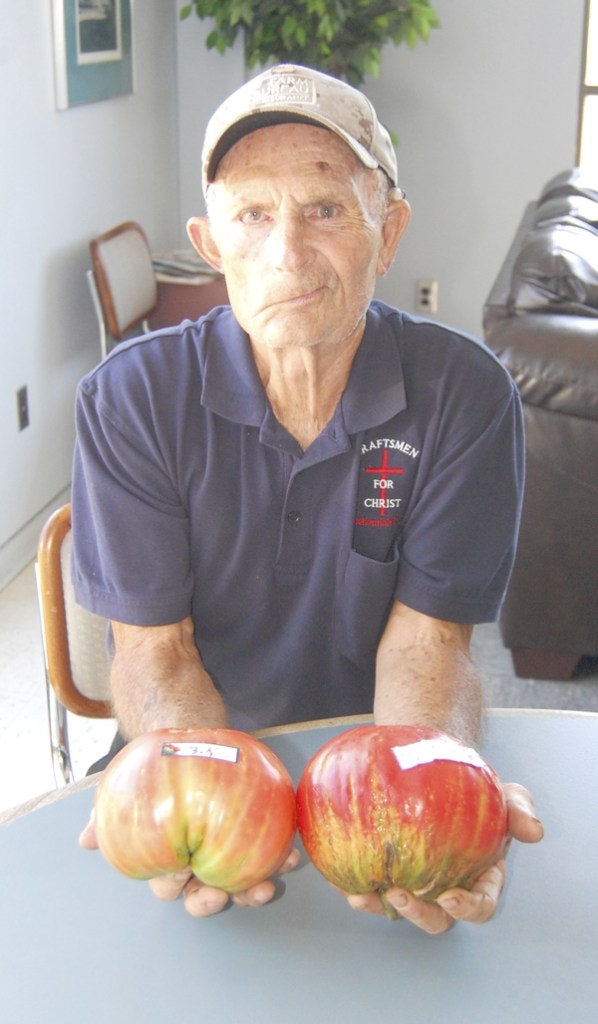 Those tomatoes are huge!

And they’re not a freak of nature. That’s just the way they grow.

Philip Wright of Gheen Road brought in a bowl full of tomatoes, each weighing more than 2 pounds.

He got the seeds three years ago, and said all he knows is they’re called Abraham tomatoes, and they are an heirloom variety.

A little research shows they are most likely Abraham Lincoln tomatoes, an heirloom that produces crops of extra large, meaty fruit. It’s resistant to foliage diseases and has a great, sweet flavor, not too acidic.

Philip said he’s already picked about 250 pounds of them so far this year. The plants are eight feet tall and he has 40 of them. Abrahams should keep producing up until the first killing frost.

Philip has given some plants to friends at his church and to some children.

“They’re sweet, but they got a big core,” he says, lifting one in his hand. The largest one he’s had weighed in at 4 and 1/2 pounds. His wife has canned some of the tomatoes and they’ve given some away. He took some to Farmer’s Day in China Grove, and will probably take some to the Woodleaf Tomato Festival and Aug. 20.

Philip starts the seeds in February inside, in a solarium. He feeds the plants with Miracle Gro until they are about 12 inches tall. He planted them outside in April and covered the tops during the frosts and freeze.

He waters them daily or every other day with a soaker hose.

Abraham Lincoln tomatoes were introduced in 1923 by the W.H. Buckbee seed company in Rockford, Ill. It is one of the few tomato classics that survived the shift to hybrids during the 1940s.

Modern day seed catalogs says the fruits are about 8 ounces each, but that could be a variety introduced to ripen earlier.

Wright has the biggest tomatoes we’ve seen all season.