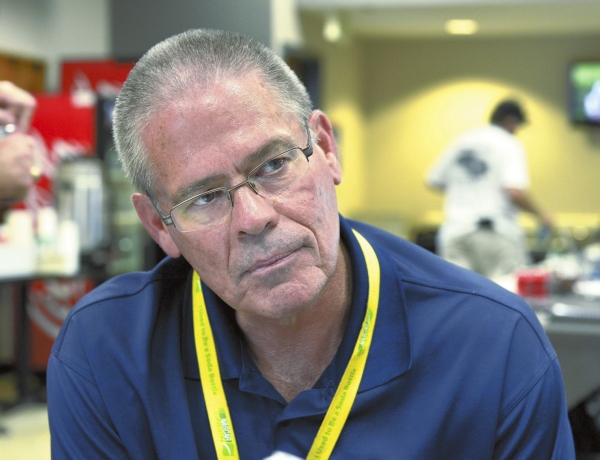 FILE - In this July 9, 2016, file photo, NASCAR spokesman Kerry Tharp talks about his experiences in his 11 years in the sport, in Sparta, Ky. Tharp was little more than a sometimes NASCAR fan when he joined the sport as a media spokesman. More than a decade later, Tharp's in charge of its most iconic track. (AP Photo/Timothy D. Easley, File)

DARLINGTON, S.C. (AP) — Kerry Tharp was little more than a NASCAR fan when he joined the series 11 years ago as a media spokesman. Now, he is leading one of its most iconic tracks.

Tharp has been the familiar public relations voice of NASCAR and chief liaison for media for more than a decade. That changed when he received a call from new NASCAR chief operating officer Joie Chitwood III to fill the open role of Darlington Raceway president.

“The more I thought about it and talked to people I respect, the more it made sense,” Tharp said.

Tharp takes over for Chip Wile, who in April became president at Daytona International Speedway after Chitwood was promoted. Tharp also comes in with the track “Too Tough To Tame” on an upswing.

The track hosts the Southern 500 on Sept. 4. The egg-shaped raceway returned to its long-held, Labor Day weekend spot on the NASCAR calendar last year after more than a decade trying to stay ahead of the padlocks.

The track’s throwback weekend — NASCAR drivers drove cars painted like those in the early 1970s — was popular with competitors and fans, and Wile’s group was well on the way toward finishing plans on this year’s nostalgic-theme race (1975-84).

“I’m going to do a lot of listening and observing,” Tharp said of the final six weeks before race day. “They’ve been through it before and I haven’t.”

Tharp’s done his share of studying, though. He has attended races at most every venue on the NASCAR circuit, seeing things he likes and a few he doesn’t.

“That’s been a great learning tool for me,” he said.

Some of what Tharp will draw on is remembering the path set by his late mentor, Jim Hunter, Darlington’s one-time president who became its chief spokesman in the late 1990s. Hunter groomed Tharp on blending the demands of the media with those of NASCAR, competitors and race teams.

Tharp hopes he can lead Darlington as effectively as Hunter, who added grandstands and began modernizing a crumbling facility in the 1990s. Until then, the speedway barely had more than a few coats of paint slapped on it after it was carved out of the farmland by Harold Brasington in 1949.

Continuing that rebirth is one of Tharp’s main goals.

Building a following among younger fans is something all NASCAR leaders are focused on. Tharp is no different. That means, he says, tapping into what the next generation of fans like to do — ensuring they have Internet access at their seats for texting or next-level websites for race information.

“It’s essential we pay attention to what fans want,” he said.

Maybe that’s why Darlington opened its infield this week for Pokemon Go players to search for and train virtual creatures inside the track.

Tharp’s easygoing style made him a popular personality among NASCAR insiders. He drew chuckles from media members when he’d “roll into” interviews with driver interviews and often banter with race winners who liked ribbing Tharp. Many hardcore NASCAR fans have seen Tharp on screen, an authoritative face in the background of Will Ferrell’s racing spoof, “Talladega Nights: The Ballad of Ricky Bobby.”

Tharp was assured the footage wouldn’t make the movie, but Ferrell saw him at a screening and said, “You’re in the movie!”

Hunter, rarely one to let a gag opportunity pass by, chewed Tharp out on the phone for the scene, leaving the newbie employee worried his career in NASCAR might be over. Hunter let Tharp squirm a bit before revealing the joke. Tharp was grateful for Hunter’s friendship and leadership, both of which the new Darlington president knows helped him achieve this latest goal.

Tharp hopes to follow Hunter’s path in keeping Darlington vital to NASCAR for generations to come.

“I consider it a privilege to be here,” Tharp said.

Stockman has won two Xfinity championships during his seven years at RCR and he and Menard worked together in that series, including a win last year at Road America.

Menard made Sprint Cup’s championship chase last year, but stands 23rd — and out of the playoffs — with just six races left in the regular season. RCR also made a change in its Xfinity team, with series director Gil Martin serving as interim crew chief for the No. 2 Rheem/Menards program.

NBCSN said Sunday’s Sprint Cup race from Indianapolis Motor Speedway was the network’s most watched and highest-rated telecast ever.

NBCSN said the broadcast averaged 5.2 million viewers, up more than 11 percent from a year ago (4.7 million).

Kyle Busch took the checkered flag in the Brickyard 400 to become the first driver ever to sweep both Sprint Cup and Xfinity poles and races in the same weekend. The network said the race was the most watched Sprint Cup event on cable since the Nov. 2014 championship on ESPN, a span of 36 events.

Food Network host/chef Guy Fieri will serve as grand marshal for the Pennsylvania 400 at Pocono Raceway on Sunday.

Count on Fieri to add his own spice to the traditional “Start your engines” command before the race.