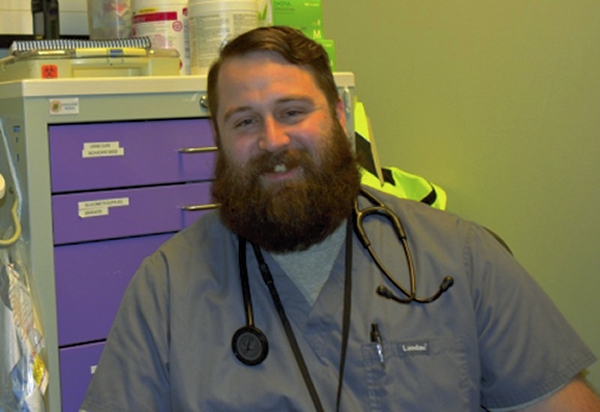 CHARLOTTE — Department of Veterans Affairs Secretary Bob McDonald on Tuesday noted the efforts of a local nurse when he told the 117th National VFW Convention about ongoing improvements to his agency.

In November 2014, Salisbury VA Medical Center Nurse Chuck Maulden literally gave the shoes on his feet to a veteran he suspected might be homeless. At the time, Maulden said the veteran had large blisters on his feet. The veteran had on dirty compression stockings that were stuck to his feet because of liquid seeping from the blisters.

The veteran had on tattered shoes. Maulden’s shoe size happened to work for the veteran. So, after tending to the patient, Maulden took of his shoes and gave them to the man. Maulden finished his shift in medical shoe covers and went home in his socks.

When McDonald spoke in Charlotte to the VFW, he praised Maulden’s actions as a symbol of VA hospitals.

Why did Maulden give the veteran his own shoes, McDonald asked the crowd.

“Because they fit,” McDonald said. “Because he cared. Because that’s what we’re about. Our employees are good people. I’m proud of them.”

In a speech where he addressed a scandal over patient wait times, McDonald said it’s a “gross misrepresentation” to classify all VA employees as “bad” just because of the actions of a few.

“Some people think everything will be fine if we fire more people more quickly,” he said. “That’s not true. We can’t fire our way to excellence. Over my 33 years in the private sector, I’ve never encountered an organization where firing people was a measure of leadership.”

Despite criticism from various elected officials, McDonald says the VA has made noteworthy improvements. For example, 97 percent of appointments are completed within 30 days of a veteran’s preferred date, 86 percent in seven days and 22 percent on the same day.

While going through the parade of health care statistics, McDonald announced that by December veterans at VA facilities will be able to receive same-day access to primary care and same-day access to mental health care. Although it was a significant announcement, attendees only gave it a polite applause.

“By the way, VA is the only health care system that publicly reports on wait times as a measure of access,” McDonald said. “Ninety percent of veterans we surveyed are satisfied or completely satisfied with the timeliness of their care. Now, we won’t be satisfied until that 90 percent becomes 100 percent. So, we’re making important progress.”

Despite improvements that have already occurred, McDonald has his eyes on more. Some will require help from Congress and other elected leaders, he said. President Barack Obama’s 2017 budget, for example, contains more than 100 legislative proposals for veterans, according to McDonald.

He said that only Congress can “clear the way” for the VA system to streamline “care in the community system,” which allows veterans to receive services at private clinics.

McDonald concluded his speech by stressing the importance of the VFW in improving health care and quality of life for veterans.

“You’re the ones who can keep veterans in control of how, when and where they wish to be served,” he said. “That’s … what this transformation is all about.”