Though nursing school building will be razed, its history, memories live on 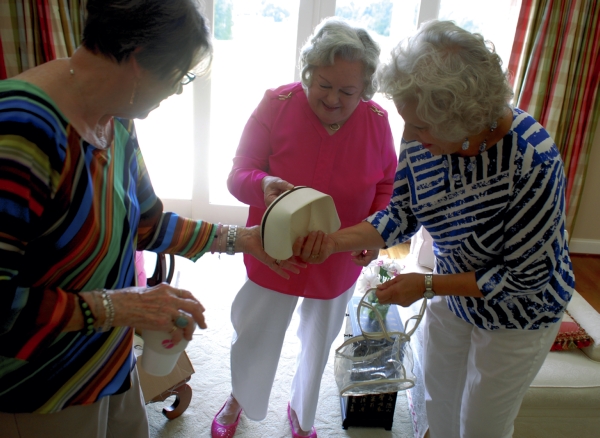 Libby Gish, center, and Mary Goodman, right, who are both nurses themselves, examine the cap Gail Kimball wore as a nursing student at Rowan Memorial Hospital from 1956-59. Mark Wineka/Salisbury Post

SALISBURY — When the former nursing school building at the corner of Confederate Avenue and Henderson Street comes down — probably this September — someone might find the old Pilot Mountain High School class ring that Gail Key Kimball lost one day while throwing snowballs on the lawn.

Kimball lived in the building and went to classes there while attending the Rowan Memorial Hospital School of Nursing, a three-year diploma program which closed with its last graduating class in 1972.

“It was a beautiful building,” says Kimball, a 1959 graduate of the program. “We loved it. It was home.”

This particular multi-level structure, considered an “annex” then, was built in 1953. The Rowan Memorial Hospital School of Nursing actually operated from December of 1944 until that last class in 1972.

But the history of nursing education in Salisbury goes much further back, at least to 1900 and the days of the Whitehead-Stokes Sanitarium, the city’s main hospital until Rowan Memorial  opened in 1936.

By 1901, records show Laura May Pitts as being a graduate of the nurses training school in Salisbury, and by 1903, when North Carolina passed the first nursing licensure legislation, the training school became a full-fledged Whitehead-Stokes Sanitarium School of Nursing, graduating its first class in 1907.

Salisbury can lay significant claim to the education of Edna Heinzerling, a 1916 graduate of the Whitehead-Stokes nursing school. Among many other accomplishments, she went on to become the director of the N.C. Baptist Hospital School for Nurses diploma program for 20-plus years and editor of the book, “The History of Nursing in North Carolina,” published in 1938.

Libby Gish, a graduate of the Baptist Hospital nursing school and co-chairperson of Novant Health Rowan Medical Center’s history committee, considers Heinzerling the Florence Nightingale of nursing in the state.

There was a period from 1935-44 — during the Depression, the 1936 opening of Rowan Memorial and much of World War II — that the nursing school was closed. It reopened in December 1944 under the direction of Lottie C. Corker.

The 1953 nursing school building that will be demolished soon also was home — the period is not exactly known — for the Rowan Memorial Hospital School of X-Ray Technology. Graduate students in nursing who were single were residents at times, too.

Kimball shares a sentimental feeling for the structure with many of the other women who lived and studied there. The training they received often launched them into highly successful careers when the options for women in professional occupations were more limited.

Kimball says she knew in her first week at Rowan Memorial Hospital that nursing was the right profession for her.

“I told myself I am where I belong,” she says.

Rick Parker, executive director for the Novant Health Rowan Foundation, says the old nursing school building probably will be razed in September, after one more public hearing by the city

“The building has been abated, so we don’t have to wait on that work,” he adds.

Parker says an employee wellness park is planned for that space. The large willow oaks on the site will not be cut down, according to Parker. “We are hopeful they will survive the demo of the building site,” he says.

After the nursing school had closed in 1972, the building was used for a while by the Northwest Area Health Education Center and also served as office and storage space for the hospital.

To commemorate the Rowan Memorial Hospital School of Nursing, bricks from the razed building will be made available. They will have an attached brass plaque engraved with important dates in the school’s history.

But graduates of the old Rowan Memorial Hospital School of Nursing often will tell you they couldn’t have had a better, more rounded, demanding education, nor made more lasting friendships.

“i wouldn’t take anything for that experience,” says Kimball, who went on to hold several nursing positions, earned her bachelor’s and master’s degrees and became a nurse practitioner.  “We really were earning our education, and we didn’t have any debt when we were through.”

Kimball attended the school from 1956-59. During her senior year at Pilot Mountain High School, she was devastated when she wasn’t accepted into Baptist Hospital’s School of Nursing.

Kimball moped for several days until her father pointed out there were other schools, and she picked up Rowan Memorial Hospital’s brochure.

Kimball thinks 13 nursing students started in her class and 10 ended up finishing the three-year program. Of the classmates who didn’t make it, Kimball says, one was sent home, one got married and one dropped out.

The first week she was a student, the older students held a welcoming party in the hospital, which included a scavenger hunt for the freshmen.

This was, of course, commensurate to a snipe hunt. But Kimball went through the halls and floors of the hospital looking for a fallopian tube, “and all the hospital staff were in on it,” she says.

If she asked for help in finding one, staff members often directed her elsewhere, to places such as the emergency room, recovery area and labor and delivery. Needless to say, Kimball was the last student back that evening from the scavenger hunt.

Kimball has kept many artifacts from her three years at the nursing school — her cap, uniform, cape, pin, Florence Nightingale lamp and even a metal water pitcher, which nurses had to keep filled for patients at all times.

She has slips of paper reminding her of the exact dates she administered her first shot or did her first catheter.

“I was scared as a rabbit,” Kimball recalls of giving her first shot to a patient.

In those days, on top of everything else, nurses were expected to give a good back rub to every patient on their floors. They changed linen, soaked feet, gave baths, washed down beds, mopped floors and cleaned out bedpans.

Meanwhile, the training they received in the classroom and at the hospital included sections in obstetrics, pediatrics, emergency room, medical service, surgical service, operating room, recovery room, X-ray and psychiatry.

By the time they were in their second and third years, the students were working full-time shifts of 11 p.m. to 7 a.m. at the hospital. They attended school year-round, received free room and board (eating at the hospital cafeteria and living in their dorm) and paid a three-year tuition that in Kimball’s day was $300 total.

When you added in their registration fee, books, uniform rental and graduation fee, the entire three-year cost for students in 1959 was $510.

All of the classes were in the basement of the nursing school building. Many of the instructors came from Catawba College.

In the summer, the girls kept windows open on both sides of their building so there would be good cross breezes. They polished their white nursing shoes every day and set them in the windows to dry, though a woman resident across the street often called to complain that it did not seem appropriate for the neighborhood.

Martha Sims Miller was a 1971 graduate of the Rowan Memorial Hospital School of X-Ray Technology, which was a two-year program.

She says the X-Ray Technology School’s dormitory rooms were in the same building as the nursing school. But there was a big difference between the radiology students and the nursing students.

“We were employees of the hospital,” Miller says. ‘The student nurses did not get any money, but we did.”

Dr. Thomas G. Thurston II is credited with establishing this pipeline of X-ray tech students for the hospital, though he never really took credit for founding the school. The students worked closely with his firm, Piedmont Radiological Associates, which included Thurston and Drs. John Wear, Irving Shafer Jr., Richard Jordan and Gerald Nieters.

Rowan Memorial’s Radiology Department was named for Thurston in 1988.

“Those were just good years,'” Miller says of her training at Rowan Memorial Hospital and living in the nursing school building. She remembers the radiology students constantly being called on and running out the back of the school building and into the hospital’s boiler room, then passing by the morgue and the cafeteria toward the X-ray department.

“We had keys to that area,” Miller says. “Whenever they needed X-rays, they called us and we ran. We learned so much by taking those calls. It was great on-the-job training.”

Miller actually met her husband, Gene, while she was a student-employee at Rowan Memorial. He came in one night with an injury that had to be X-rayed. It was her 22nd birthday, and Martha was not happy about having to work that evening.

‘Thank goodness they didn’t let me off that night,” she says. The couple have been married 43 years. They did some of their early courting under the watchful eyes of the nursing school/X-ray school’s house mothers.

The building had two parlors in which to meet visitors.

The house mothers also would not yield on nightly curfews. They would lock the front doors at the exact curfew hour.

“One minute after that, you’d better find a place to sleep,” Martha says.

As with the nursing students, the X-ray techs had their classes in the basement of the building. Miller says Jon Hough served as director of their school.

Miller recalls the radiology trainees being able to set their clocks by the time Thurston, who lived across Confederate Avenue from the student school, went for a run each morning.

As a X-ray technology student, Miller was assigned to Thurston’s group of doctors, and she recalls fondly the many hours she would sit with radiologists such as Wear and read films of patients.

As with the hospital’s school of nursing, the School of X-ray Technology ended after the graduating class of 1972, and those classes were picked up by community colleges such as Rowan Tech.

The Novant Health Rowan History Committee is  actively  seeking information, memorabilia, documents and artifacts pertaining to all aspects of  the history of the hospital and nursing school. It plans an exhibit at the medical center to demonstrate  progress  in health care through the years. If  individuals would like to share stories, or  contribute items that may become part of the exhibit, contact History Committee Co-Chairs Libby Gish and Mary Goodman at the Novant Health Foundation Rowan Medical Center at 704-210-6880.