Chicago Cubs get closer Aroldis Chapman in trade with Yankees 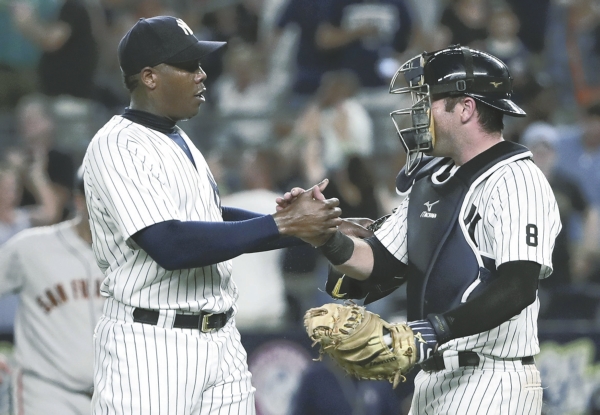 CHICAGO (AP) — Before the Chicago Cubs completed a trade for Aroldis Chapman, owner Tom Ricketts and president of baseball operations Theo Epstein decided they had to hear from the closer himself about a domestic violence allegation in the offseason.

So Ricketts and Epstein asked Major League Baseball for a window to speak with the left-hander, and they got him on the phone Monday. When the conversation was over, the blockbuster deal was on.

Chasing their first World Series title since 1908, the Cubs addressed one of their few weaknesses by sending a pricey package of four players to the New York Yankees for Chapman, one of the most dominant relievers in the game, but one who also comes with some risk for a franchise riding a positive wave.

Chapman is expected to join the Cubs for Tuesday night’s game at the crosstown White Sox.

For the Yankees, it was a rare July trade that saw the best player in the deal leaving New York. But Chapman is eligible for free agency after this season, New York also has All-Stars Andrew Miller and Dellin Betances in the bullpen, and its haul included top shortstop prospect Gleyber Torres, versatile pitcher Adam Warren and minor league outfielders Billy McKinney and Rashad Crawford.

“This was an easy call, and this was the right call,” general manager Brian Cashman said. “Easy because we traded from an area of strength and we are excited about the players that we’ve received for someone that obviously was only under control for two more months.”

The Yankees had won six of eight heading into Monday night’s game at Houston, but they still face long odds of getting to the playoffs. They made the decision to trade Chapman after his agents said he would not agree to a new contract that would start in 2017, a person familiar with the talks said. The person spoke on condition of anonymity because no public statement on those talks was authorized.

If New York slips back any further, it could engage in a rare sell-off for the franchise. Miller, signed through 2018, also could be traded. All-Star outfielder Carlos Beltran, first baseman Mark Teixeira and pitcher Ivan Nova are eligible for free agency after the season and could be sought by contenders.

“I think that when the right buy-or-sell circumstance presents itself, then this department will be making recommendations to ownership and then they will direct me on what they want,” Cashman said.

With lefty-batting sluggers Bryce Harper of Washington and Brandon Belt of San Francisco possibly looming in the playoffs, the addition of Chapman gives Cubs manager Joe Maddon one of the majors’ top assets when in need of a late strikeout.

“The Cubs have been playing really good baseball,” Chapman said through a translator before he left Houston to travel to Chicago. “I think they’re probably one of the better teams in both leagues right now. They have a good rhythm right now. They’re fighting to get that ring, so it might be a good experience for me to be there.”

Chapman, who threw the 62 fastest pitches in the majors last season, was traded from Cincinnati to New York last December after a deal with the Los Angeles Dodgers fell through when it was learned Florida police investigated an accusation of domestic violence involving the Cuban pitcher.

Prosecutors declined to file charges, citing conflicting accounts, and Chapman was suspended for the first 29 games of the season, losing $1,856,557 of his $11,325,000 salary. He was the first player penalized a finite number of games under Major League Baseball’s domestic violence policy.

“I regret that I did not exercise better judgment and for that I am truly sorry,” Chapman said Monday in a statement released by the NL Central-leading Cubs. “Looking back, I feel I have learned from this matter and have grown as a person. My girlfriend and I have worked hard to strengthen our relationship, to raise our daughter together, and would appreciate the opportunity to move forward without revisiting an event we consider part of our past.”

Epstein said the club thoroughly investigated the situation. But it wasn’t until they spoke with Chapman on Monday that they were ready to complete the deal.

“There was genuine sorrow, regret,” Epstein said. “He’s open about the fact that he’s learned from the incident and that he feels he’s grown as a person and will continue to grow as a person and that was important to us.”

Asked if the Cubs spoke with Chapman’s girlfriend or someone close to her, Epstein said they “took efforts” to make sure they looked at the issue from every possible side.

Warren was drafted by New York and made his major league debut with the Yankees in 2012. He was traded to Chicago in the December deal that moved infielder Starlin Castro from the Cubs to the Yankees.

But the centerpiece of the Yankees’ package is the 19-year-old Torres, one of the top infield prospects in baseball.

“We’re disappointed we swung and missed in our efforts to sign him as an international free agent back in the 2013 class, but certainly you keep your eyes on players you’ve liked in the past and he was definitely a target for us,” Cashman said.