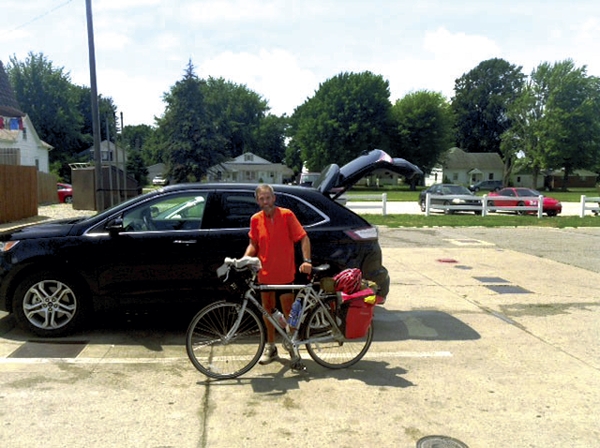 The final stop on this ride was in Walton, Indiana at about 2pm on Friday. We are about to load the bike in the car before the drive home and arrival early on Sunday morning.

Editor’s note: Rowan County resident David Freeze is off on his latest summertime cycling adventure. This time, he’s riding the famed Route 66 from California to Chicago. This is the final installment of his odyssey.

Pineapple milkshakes from Dairy Queen and breakfast in the evenings from Denny’s and IHOP were two new habits developed while on the Route 66 adventure. This ride covered 2,778 miles over 38 days of cycling, part of it in the hottest temperatures I have ever experienced. Kingman, Ariz., was the hottest at 117 degrees but Needles, Calif., and Oatman, Ariz., were not far behind.

Those milkshakes and pancakes helped keep me going when the long distances between supplies were a major concern. Often, it simply came down to carrying all the water I could cram in my bags. Still, a few times I came close to running out. I never did though.

Other things that didn’t happen included wearing a rain jacket. Although I was caught in several severe storms, it was usually warm enough that the rain felt good coming down. I didn’t have any serous bike problems but it sure seemed a possibility back on July 16. Only two flat tires kept my average at less than one per 1,000 miles ridden. Most cyclists would be happy with this and I certainly am. The slow leak that allowed me to ride out the worst storm was a special blessing. The tire held just enough air long enough for me to make it safety.

The were a lot of great days and no bad ones. On Sunday morning, July 10, I learned about the young man who won the first cross-country road race, met Stephanie and Danielle who invited me to church breakfast and saw the Mickey Mantle sites in Oklahoma. Sundays are always my favorite day to ride, but this day edged out all the other days of pedaling.

I bought a National Parks pass and put it to good use for the Petrified Forest and Painted Desert, the Gateway Arch in St. Louis and more. Little towns that grabbed my heart included Santa Rosa, Grants, Williams and New Buffalo. Springfield and Oklahoma City were fun bigger cities.

My habit of buying pie at all of the oldest cafes made for some fun too, especially at the Mid-point Cafe. Elvis pie was the best of all of them I think. There were so many Elvis sightings, I can hardly remember them all. Finding the home towns of Garth Brooks, Roger Miller and so many other famous people was enjoyable too. I wondered what they thought as they walked the streets of their towns.

Speaking of pie, I was back on my “eat everything in sight” method of getting enough calories. Each night, I ate so much that my trash filled a good- sized plastic bag. Little Debbie peanut butter  cakes were a staple this time. Never did this food actually make me feel full though, at least not for long.

Best states for the overall Route 66 experience were probably Oklahoma, Arizona and Illinois. Riding the interstates to connect the existing Route 66 roadways was not my favorite but usually proved quicker than other options. Both of my flats came on the interstate where there is so much small trash like nails, screws and wire in the breakdown lane.

I had so many special motels that I won’t try to mention them but the older ones were my favorites. Except for the El Rancho Motel in Gallup, Ariz., that was supposed to be such a special experience. I bet it was for the women who got to use actor Gregory Peck’s bathroom. The experience of an almost $10 grilled cheese thankfully didn’t happen.

All the connections to the Civil War, both for battles and to Abraham Lincoln, added to my excitement. I don’t think I missed much on any Civil War information.

I met so many special people along the way, just as it always seems that I do. Lauren Martz, who had to go all the way to Santa Rosa from Salisbury to meet me, was a pleasant surprise. Hilary Haselton, who jumped in and rode the last seven miles to my Route 66 finish, and Rasheed Hooda, walking all of Route 66 going west, must also be mentioned. Rasheed is doing his sixth day of six months on the road as you read this. Thank you to all the people that I spoke to or who helped me in some way!

The top Route 66 site was the Blue Whale in Catoosa, Okla., and I certainly enjoyed the giants and the world’s largest rocking chair. The neon signs at the old motels were fun too. Every day included so much history, whether as part of Route 66 or otherwise. My favorite Route 66 comment came less than a week ago when I stopped at a McDonalds and the clerk asked where I was riding. After hearing that I had just completed Route 66 from California to Chicago, he looked at me knowingly and said, “Oh, yeah. From the movie ‘Cars.’ ”

Most surprising was the late morning when I found a wallet from Connecticut and stopped a car from rolling into the gas tanks at a convenience store. I never heard a word from the guy about the wallet.

Others helped me as they sent emails about cities and areas that they were familiar with and recommended sites to see. Jack Connery and Mac Bridges were two who stayed in touch for long periods. Total emails for this ride were by far the highest yet and I have heard from all of the country and at least one from Canada again.

At the end of this adventure, I can’t wait to go again. I have about six more states in the northwest needed to add to my total of states where I’ve cycled. The maps are already here, ready for when I can go.

Drivers were good and gave me plenty of room except when I was near Chicago. Note to those drivers: Bicycles don’t belong on the sidewalks and trying to crowd them is not cool. By far, I had so many more pleasant honks and waves from motorists than the few critical ones.

As I have said before, the responses from the Post’s readers around the county and other parts of the country make me feel like I have so many partners as the adventure develops. Once more, God took care of me because of your prayers and my own. Nothing could be better!

The Salisbury Post is planning a special celebration of this adventure, so watch for news on it. The Post is my partner on these rides and we should all count ourselves lucky to have such a fine local newspaper. Come and enjoy this special time and let me thank each of you personally for riding along!