Riding Route 66: Finishing the ‘Mother Road’ in ‘my kind of town’ 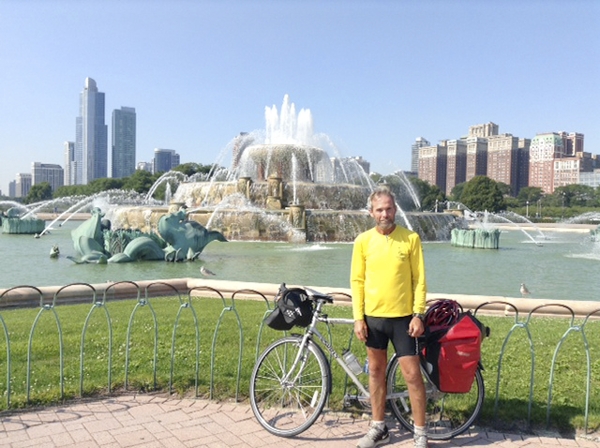 Freeze made it to the Buckingham Fountain in Chicago on the morning of July 20, about 9 a.m. It is a spectacular setting for the finish of the west-to-east Route 66. Photo by David Freeze

More than a little excited would be just a mild way of stating my mood this morning. Heading to Chicago on my bike was a first, and of course big cities are always full of challenges anyway. After briefly looking over my maps last night, I was confident of being able to get into the city even though I was squarely in the middle of rush hour.

I had spent lots of time running in Chicago during several trips there, one even for a half marathon. I knew about Lake Shore Drive and saw that part of my cycling entry would be on it. Lake Shore follows the lake almost from one end of the city to the other, I think close to 20 miles altogether now. My starting point was in Lansing, then on to Calumet City and Burnham along the way.

All went well except that a train had the road blocked for 20 minutes in Burnham where I had no choice but to wait it out. Afterwards one driver had something not so nice to say to me but it didn’t phase me at all. Most of the trip into Chicago had bike lanes or bike paths. The trip in was about 25 miles.

With about seven miles to go, a female cyclist asked about my bags and we struck up a wonderful conversation that lasted until we got to the Buckingham Fountain, the ceremonial start/finish of Route 66. That cyclist was Hilary Haselton, an advertising copywriter in Chicago for 15 years who commutes to work by bicycle. We discussed a lot of topics and vowed to stay in touch.

The fountain was even prettier than I remembered, but in typical Chicago fashion most of Grant Park around it was blocked off because workers were setting up for a festival. Most of you will remember that Buckingham Fountain was used for the start of every “Married With Children” show.

After getting my pictures of Hilary and then the fountain, I had planned a meeting with another interesting person. Rasheed Hooda had been following my Route 66 journey with interest because he planned to walk the whole route from east to west. We had never met but had exchanged emails for several weeks and planned to meet at the fountain at 10 a.m. We did just that, and I found that Rasheed plans to take five to six months to walk to Santa Monica and that he hopes to inspire others to be active in their own way. Rasheed joined me for a celebratory donut at DoRite Donuts on Randolph Street, a spot suggested by Hilary. These were not regular donuts, as you might imagine, with each one being just under $3. Mine was a cheese Danish donut.

Rasheed and I got our pictures with the appropriate street signs, too. We got mine for the Route 66 End and of course we got his for the Route 66 Start. They are on Jackson and Adams streets near the waterfront.

After leaving Rasheed to begin his walk this afternoon, I stocked up at a 7/11 and did a little riding and walking around the waterfront myself. I have had some very pleasant memories and added to those today. The whole time, runners, walkers and cyclists were keeping the Lake Shore Trail busy. I hated to go but needed to get back down the road and plan for some bonus riding.

I am back in Lansing, Illinois again tonight, this time at a Red Roof Inn. They had a sign out front that said rooms/$39.95 and up. I was informed that the low rate is for Ford employees who stay at the motel for seven consecutive days. I imagine that they hardly ever use that rate, but the desk clerk got squeezed a little bit and settled on a very reasonable price for me.

Tomorrow, I will begin riding south. I am not far from Lake Michigan and am using Mapquest to try and work my way into Indiana then around the bottom of the lake and back up a little on the Michigan side. I can’t wait to get started. There are three more riding days left, with the completion scheduled for Saturday afternoon somewhere in Indiana. Meanwhile, I plan to see some more interesting sights and fulfill my desire to check Michigan off the cycling list. I had previously been to Indiana.

After finishing my 35-day journey on Route 66 this morning, I will say how much of a kinship I feel with all those who have traveled the “Mother Road” before. A lot of brave souls pushed America’s boundaries and helped make her what she is today. I will address these thoughts more in the next few days. And, as always, Chicago is certainly “My Kind of Town!”

Bonus pedaling, here we come! I hope you will keep riding along. See you again tomorrow.