Riding Route 66: An Elvis sighting near the end 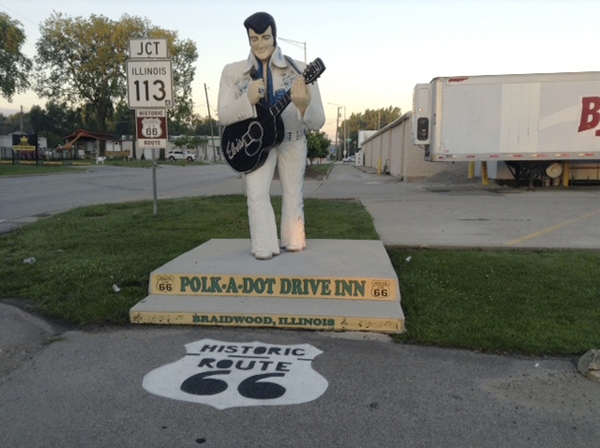 Freeze started the day with Elvis at the Polk-A- Dot Drive in Braidwood, Illinois. The place has been in business since the 1950s and looks like it is still going strong. Photo by David Freeze

Some may have wondered how the night at the Sun Motel went in Braidwood. Much better than I expected would be the best answer. I learned soon after starting these big adventures that there is usually a mix of at least some good with the bad. I had great WiFi, a super bed, a very quiet room and an endless ice supply. Lets move on from there.

As I get farther north, there is more light in the sky at 5:30 a.m., so I made good time right out the door. I was off the route a couple of miles but joined back up quickly. Braidwood had more to it than I expected. The Polk-A-Dot Drive-In caught my eye with Elvis out front and Elvis, Marilyn, James Dean and Betty Boop on the side. The drive-in has been in business since the 1950s and still looked plenty busy.

I had an easy ride down State Road 53 into Wilmington where the Kankakee River runs right through the town and actually was one of the prettiest rivers I have seen on this trip. The Gemini

Giant with his astronaut helmet and holding a small rocket was pretty special, too. His picture is used a lot in the Route 66 marketing material. Some might say that his helmet looks more like a cone head, but either idea is fine with me.

Then came Elmwood, which was very small and off the side of 66. I kept pedaling on toward Joliet, through what they call the prairie land. I was surprised to ride up on another NASCAR track, this time the Chicagoland Speedway. It is still at least 50 miles south of Chicago.

I pedaled on into Joliet next and immediately got lost. I saw the street that I was supposed to turn on, and it was blocked and right beside a police station. This didn’t seem the best time to go around the signs, but a couple of meter readers told me to do just that, and it worked out. Route 66 went on, and I turned off to ride on what is called the Plank Road Trail for 20 miles, first to Frankfurt and then on to Chicago Heights. No more little towns until I get into and back out of Chicago. There is lots of traffic now, and the bike trails are a good way to keep rolling.

After leaving the 22-mile long Plank Road Trail, I was briefly back on the Chicago Heights streets and did pretty well navigating my way over to the Thorn Creek Trail. I did stop in Glenwood and make sure I was on the right path with Rosa Acevedo. She was a wonderful help and plans to catch up on her reading about the whole Route 66 adventure.

My only remaining goal for the day was to find the Star Way Inn in Lansing. I found it, made a stop at Walmart for some supplies and am ready to eat once this report is submitted. Lansing has a ton of traffic, and much of it seemed to be either going into or out of the Walmart.

I rode 65 miles today, and I am less than 30 miles from the official end of Route 66 in Chicago and hope to be there by 10 a.m. tomorrow. After some photos and meeting at least one person who has been following my ride, I will look around a little bit and then head back south. I want to ride along the Lake Michigan waterfront and, if possible, make it to Michigan by Saturday. This is a brand new area for me, as I have never ridden on Lake Michigan although I have cycled along lakes Ontario, Erie and Huron previously.

A few of you have mentioned that I may not be eating enough. Rest assured that I am shoveling in the food, especially late in the day. One evening meal a couple of days ago included three big blueberry pancakes, scrambled eggs, hash browns and fresh fruit from Denny’s and lots more snacks after that. I always try to clean up the motel room and put all my food trash in one bag. It is one big bag on most evenings,

On the trip south from Chicago, I won’t have Adventure Cycling maps to follow, but that will add a little bit more excitement. I keep hearing about the beautiful waterfront I will see leaving Illinois for a short jaunt into Indiana and on into Michigan. Let’s head that way tomorrow, but first it is on to Chicago to complete the Route 66 adventure after 35 days on the road. See you tomorrow!

Jerry Stokes sworn in as chief of Salisbury Police…