Riding Route 66: Getting past roadblocks for a great day 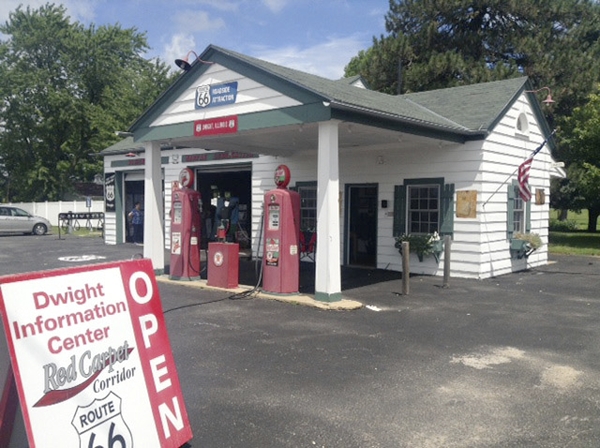 The Ambler-Becker Station in Dwight, Ill., was the longest continually used station on Route 66. It was in service from 1933-1999. It is the Dwight visitor center now. Photo by David Freeze

This has been one of my most up and down days. It seemed like forever ago that I woke up to find the sky providing fireworks from another overnight storm. The lightning was continuous, about as close to spectacular as I want to see it. When I left the fantastic Super 8, a gentle rain was falling with a threatening sky all around.

I had gotten off course last night to find the Super 8 and had worked to establish how to get back linked up with Route 66. When I went to bed, I thought I had the best way, but I outsmarted myself. I needed to get on Shelbourne Street with the result of heading for the town of Towanda. I found an easy way to get on Towanda Avenue and just took it, but soon realized that I was going the wrong way. I rode an extra couple of miles to find Shelbourne and turn the right way, only to find it closed to all traffic, including bikes. Right beside the street was the best-looking and freshly paved bike greenway that I have seen on the trip. Shelbourne actually became Route 66 and that is why It was important to use it

You can probably guess that I went right through the “road closed” signs and started pedaling. About 2 miles into the ride, I found the road and the bike lane completely blocked where some drainage work was being done. After dragging the bike through a swampy jungle, we were back on the road all alone. One worker was there but he kept looking at his phone, and I don’t think he cared much anyway.

All this took place in the cities of Bloomington and Normal. The two cities bump up against each other and actually share the same Main Street. When I rode through Bloomington, it reminded me a lot of Asheville, both trendy and quirky with a lot of characters. Just before entering Normal, I wondered if there was an actual checkpoint to see if visitors qualified. Normal is the home of Illinois State University and is definitely a college town.

On to Towanda, where they have much more of the fabulous bike path called a linear park. They have freshly paved over part of the old Route 66 that is not used anymore. Next was Lexington where there are some Burma Shave signs along the way. I haven’t mentioned these before, but Burma Shave was famous for spreading out a quote over about six or seven signs and making you think. I have found them all along Route 66.

Then things started to heat up. I pedaled into Pontiac, a wonderful little town that really is fanatical about Route 66. I rode all around it and found old walls painted up as Route 66 storefronts, a museum and one of the most interesting items of my whole journey. A famous Route 66 artist named Bob Waldmire used to travel around in a modified school bus that he called a land yacht. It was amazing to see. Also in Pontiac was a statue of Abraham Lincoln in front of an actual courthouse where he served as a traveling circuit judge. They have little cars on every street corner and each has a theme. Pontiac might be the best town I’ve seen.

On to Odell where I found another restored Standard service station that is used as a visitors’ center. Odell was one of at least three towns that had an underground passageway to keep residents from being harmed when they tried to cross busy Route 66. Next was Dwight with probably the best of all the restored gas stations along the way. The Ambler-Becker Texaco station was used continuously from 1933 to 1999, making it the record holder for all of Route 66. I talked to two ladies there who sent me to see the rest of the town, but the rail line is being torn up for future high-speed rail and it was almost impossible to see the downtown highlights up close.

Gardner was my next stop, with a lot more to see than I expected. They had a two-cell jail that was used in the early 1900s — just think of Andy Griffith’s jail but way smaller. They had an old bus restored to the diner that it once was. Plus, a wonderful postal worker named Debbie Richards helped me ship some stuff home to make room in my bags. I could tell that Debbie is a lot of fun and knows everybody in town. Braceville came next as I pedaled toward Braidwood, my home for the night after 80 miles.

I got lost again near the end of the day but somehow got back on track quickly to find my motel. It is a little shady, but I can make it through one night. Plus I was told last night that there were no rooms in the area due to two festivals. Just one night! I do have great WiFi.

My phone might be messed up from getting wet in the all morning rain today, and my debit card has been refused again late this afternoon twice. This is an issue every time I go on these long rides, and hopefully the F&M folks will get it squared away quickly.

I am now about 80 miles from Chicago, and all of today’s little towns will be replaced by much bigger cities as I get closer. Today’s most enjoyable features were the wonderful people, the fantastic scenery, the far-ahead views of the grain elevators, crickets chirping during the rain and endless passenger trains flying by.

I am late again getting my story submitted so will send it now. Thanks for all wonderful emails. I will be back tomorrow with more fun!