Riding Route 66: Another great day on the road 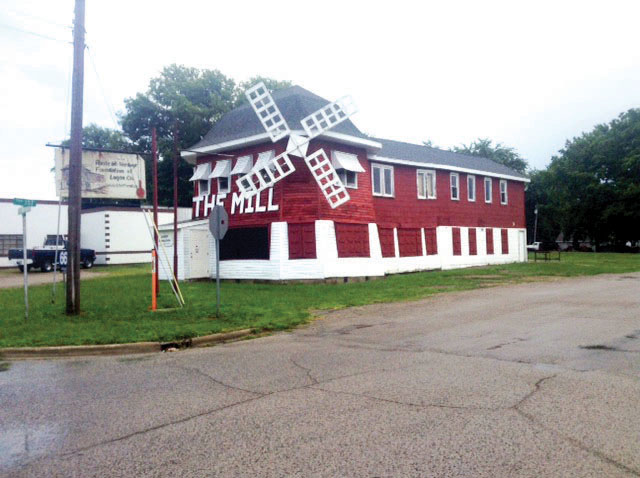 The Mill in Lincoln, Illinois first opened as a sandwich shop in 1929 on Route 66. The windmill turns and was lighted. A group is in the process of restoring it as a museum. Photo by David Freeze.

After yesterday’s very late finish to the day’s ride, I thought about leaving a little later this morning. By staying up way too late working on a plan for today, I didn’t get quite the rest that I needed. Today could easily have been a shorter day, but I decided to go for an average day and get off the bike before too late. The later start didn’t happen.
Not exactly sure how to get back on track after seeking out the Motel 6, I asked a couple of people and then headed to downtown Springfield, Ill. I wanted to see the Abraham Lincoln sites, at least the ones that were open very early. I realized quite quickly that somehow I had stumbled back onto Route 66 and headed north, just the place I wanted to be.
I saw the historic Illinois State Capitol building that Lincoln used for several speeches and debates. His statue stands in front of the magnificent building. Just a short distance away is “Mr. Lincoln’s Neighborhood,” a National Park open for all to see where the Lincoln house and many others still sit as they did in 1860. It is a beautiful and somber place. Amazingly, Route 66 goes by the backside of the neighborhood.
Right on track, I headed for Sherman and then on to Williamsville. The main entrance to Williamsville’s downtown was blocked for railroad work and I kept trying to find another way into town. With a huge storm building off to the west, I just decided to start pedaling on up the road. A sign saying the Route 66 frontage road was closed at 60th street meant nothing to me because certainly there were no towns around with that many streets. So I pedaled on and quickly noticed that there was not another vehicle on the road. I kept going, hoping that my luck would again allow me to get by the road closure if there was one. I rode up on the place where the road was being worked on and saw two guys sitting in a truck, so I just rode right on by them and waved as I did it. They didn’t wave back.
Just after this, that storm broke with a vengeance. In the middle of a tremendous downpour with wind and major lightning, I rode into downtown Elkhart just as the worst of it hit. Another cyclist was already  under a storefront that kept us both  somewhat protected. Bill Peterman of Sherman was great company while we waited for the worst of the storm to pass. Bill said he hopes to do something similar to what I am doing in the future and currently completes in triathlons.
I passed through Broadwell next with little fanfare and rode on to Lincoln. Lincoln was actually named for President Lincoln while he was still alive — to which he said, “I never knew of anything named Lincoln that amounted to much.” The Route 66 landmark in town is “The Mill,” a 1920s eatery that had a revolving windmill with lights during its heyday. Currently there is an effort afoot to restore the building as a museum.
I enjoyed a visit to Atlanta where I found the 1930s Palms Cafe doing a brisk business on this Sunday. I stopped in to get two slices of pie to continue my tradition of getting pie at the oldest and most famous eateries along the way. The giant “Hot Dog Man” is right across the street. I imagine he gets lots of pictures taken. I also enjoyed the town’s eight-sided library, which Mr. Lincoln actually visited.
On to McLean and past Funk’s Grove and Shirley with little reason to stop. I did see some signs about the Funk’s family “sirup,” something akin to maple syrup.
My goal had been to make it to Bloomington/Normal by 3 p.m. I didn’t make it until 4, but was glad to get off the bike after 78 miles. The weather today was very humid early, then the storms came, and after the sky cleared the humidity returned. As I write this, the national news paid attention to the fact that there are more storms headed toward central Illinois. Some violent weather and heavy rains could hit again tonight.
Now about 150 miles from Chicago, it is going to take some good planning to venture into Chicago’s lakefront for some pictures and then start my way back south. I am in a Super 8 in Normal, hoping to have my feet up and watch some baseball tonight. To those of you that I owe email replies, I will get them done tonight and tomorrow.
I always enjoy Sunday rides with the lesser traffic and less rushed pace. Today was just like that and worked out just fine. Thanks again for riding along and I will have more tomorrow.