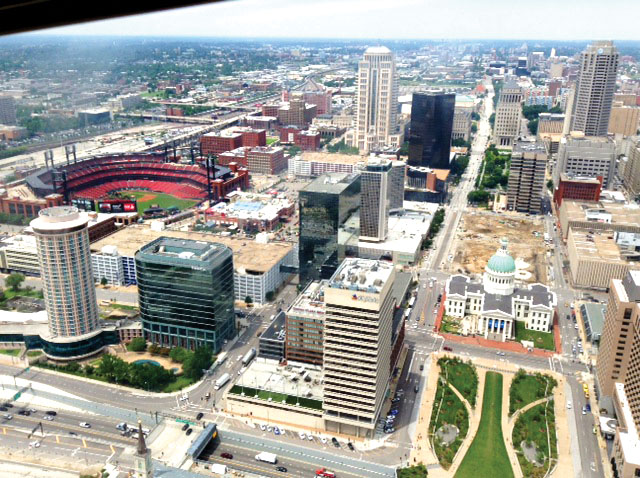 This is the view looking toward Busch Stadium and the city of St. Louis from the Gateway Arch. The Mississippi River is on the other side of the arch. Photo by David Freeze.

Little did I know when I got up that this would be a more exciting day than usual. My night in Exeter, Mo., went well at the America’s Best Inn. No early storms were forecast but I could see by my maps that Missouri was going to get one last round of hillwork out of my legs with some serious climbing.

My early start was negated somewhat by a climb before leaving Exeter that was not the longest but was one of the steepest yet followed by another before I reached Ellisville. In fact, nothing about my early climbs said anything about Route 66. I was surprised to see the Historic Route 66 Byway signs show up again just as I topped out.

Ellisville looked new and flashy as it sat atop the day’s last serious climb. Ellisville also became the start of my run into St. Louis on State Road 100. Usually with a bike lane and lots of “Share the Road” signs, I just pedaled straight east. The traffic was moderately heavy but they always gave me plenty of room and no horns.

Two things did happen as I stayed on SR 100 through Ballwin, Manchester, Des Peres, Brentwood and Maplewood. It might have been a good day to buy a lottery ticket. All of these towns ran together somewhat, but I think I was either in Maplewood or just getting into St. Louis when I looked down on the road and saw a wallet with some money under it. I had just crossed an intersection and stopped to pick it up and found the wallet slammed full of cards and other things but only $3 in cash. The owner is from Connecticut. I put it in my bike bag and pondered what to do.

Not 20 minutes later, I stopped at a QT convenience store, one of those that has everything. After eating and filling my bottles, I was packed and about to pull out when this guy drives up and hurriedly gets out of his car. Right in front of me the car starts rolling backwards toward the gas pumps. I ran and jumped in the car, stopped it in the middle of the lot and put it in gear. I went in to find the guy but somehow he was already back in the car and about to drive away. We talked a  little bit and I got some directions out of him before he left.

Back on the bike, I headed for waterfront St. Louis and the Gateway Arch. From about three miles out, I could see it and just kept following the same road till I got close. I had emailed the contact person at the Gateway Arch overnight and asked it I could leave my bike in a protected place. I got a snippy reply that I could not and that they had no one to stand guard over it.

Earlier in the morning, I needed to buy a replacement tire tube and a couple of CO2 cartridges, so I stopped at the first bike shop I saw. The owner suggested that one of the hotels close by might keep the bike for me. That is exactly what happened when I left the bike at the Hyatt, all safe and sound. Looking back, I think I could have just leaned it against the fence at the arch and it would have been fine.

With my National Park pass, it only cost $10 to go up inside the arch and it is well worth it. The wait was about an hour, the ride to the top in the very small little tram cars takes four minutes and I stayed up there for about 20 minutes. The views were spectacular but the windows are very small and it is crowded. After coming back down, I went to the movie about how the arch was built and proceeded to sleep through most of it. The Gateway Arch is 630 feet tall, the tallest monument in the United States.

Back on the streets, I wanted to do something with the wallet and find my way due north on the Riverfront Trail along the Mississippi. I proceeded to get lost and asked ten people who were all from out of town for directions. Finally, I found the trail and started riding through some of the industrial backsides of St. Louis. The river was beautiful though and for some reason I find the big rivers so peaceful.

On toward my last big sighting for the day at possibly the most historic bridge of the Route 66 era, the Chain of Rocks Bridge between St. Louis and Granite City, Ill. Just before leaving Missouri, I saw a uniformed security guard at the county water plant and asked him about the wallet. He called the PD while I was there and that set me free to ride on.

I pedaled onto the famous bridge, a mile long and bent in the middle. Route 66 drivers paid a toll to use this bridge between 1935 and 1965 over an especially picturesque section of the Mississippi. The bridge is now open to pedestrians and cyclists only, making it the second longest pedestrian bridge in the country.

After a long day of sightseeing and just 52 miles, I am now in an Economy Inn in Granite City, Ill. Once again, there was no state sign but Illinois is not new to me anyway. I crossed the Mississippi River at Chester, Ill. on my cross-country ride in 2013.

I estimate that there is about 320 miles remaining to Chicago. I am working on plans to venture briefly into Michigan after that. The ride is definitely in the home stretch now. The rest of the ride should be very interesting. Thanks for reading!