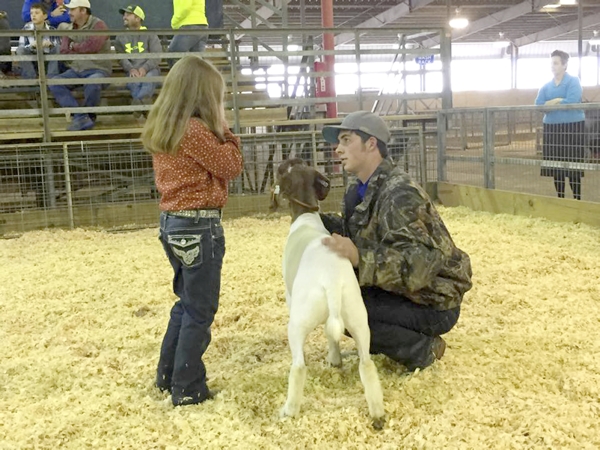 Submitted photo Austin, right, a 4-H member, consoles a younger member who was having trouble with her goat at a show.

SALISBURY — As a newly minted 4-H agent in North Carolina, I need to explain what exactly 4-H is and how is it relevant to youth today.

The common misconception is that 4-H is only for kids who have animals and live on a farm or who want to learn how to cook or sew. The truth is that 4-H is so much more than that. 4-H offers youth opportunities to learn, grow and do things in every area from public speaking to shooting sports to demonstrations to those tried and true areas of livestock production and family sciences.

Today I want to talk a little about some of the lessons learned from a successful livestock project.

Youth exhibition of animals in 4-H goes all the way back to the original 4-H clubs in the early 1900s.

Youth who enroll in a livestock project have to take care of an animal, provide proper nutrition, exercise and housing. Most people then think the goal of the project is to learn animal husbandry, nutrition, and to exhibit the Grand Champion at the fair. Well, I am here to tell you that 4-H animal projects aren’t here for those reasons.

So, what is the purpose if it isn’t for a purple ribbon, belt buckle or trophy? All 4-H programs, livestock projects included, are designed to equip the youth with skills that reach far beyond the surface of the project. Skills like problem solving, decision-making, confidence, responsibility, time management, compassion and sportsmanship. These skills serve youth far beyond the end date of the project. These “soft” skills are necessary for anyone who wants to be successful in life.

I could tell you hundreds of stories of how I have seen this “soft” skill manifest itself in youth. I could tell you about Chris, a youth in my program in Montana who showed up at his first fair with stitches in his forehead from where his steer kicked the trailer door and hit his head during loading.

Chris was terrified of his steer when they got to the fair, but after a couple of hours of he and I working with his animal, he calmed down, the steer calmed down and he had a successful fair.

Chris learned from that experience and four fairs later, he was the exhibitor I used to help younger exhibitors learn how to prepare their cattle for show. He went from a scared 10-year-old to a confident, well spoken, responsible teenager, partly due to his experience in the show ring.

I could also tell you about Austin, a youth who exhibited goats. When I met Austin he was already a great livestock exhibitor and a model 4-H member. Once at a show, I noticed a young girl having trouble. Her goat wouldn’t cooperate with her and knocked her down in the ring. She came out of the ring in tears having placed lower in class than she wanted.

As I watched her leave the ring and tell her mother that she didn’t want to do this anymore it occurred to me that all she needed was encouragement and assurance. Her mother told her that, I told her that, but still she seemed unconvinced.

Austin had won his class, he had helped teach showmanship and grooming to the younger member. Austin was kind of a rock star in the goat barn. When Austin went and knelt beside this crying little girl and told her that everything was going to be OK and that she shouldn’t give up, her whole outlook on things changed.

Not only did she finish out that show, but has continued to grow in her skills and confidence in the years following that exchange. That gesture from an older 4-H member consoling a younger member, the willingness to put aside the things he had to do to prepare his animals for show and ensure that a fellow 4-H member continued on and didn’t give up was simply inspiring.

I could go on and on about the power of the 4-H program to change lives and build successful adults. I truly believe in the program and have a real passion for it.

If you have any questions about 4-H feel free to contact me at the Cooperative Extension office at 2727 Old Concord Road. My email is matthew_mcclellan@ncsu.edu or you can reach me by phone, 704-216-8970.

By Morgan Watts Rowan Cooperative Extension SALISBURY — I’m sure everyone has noticed at this point that summer is here... read more