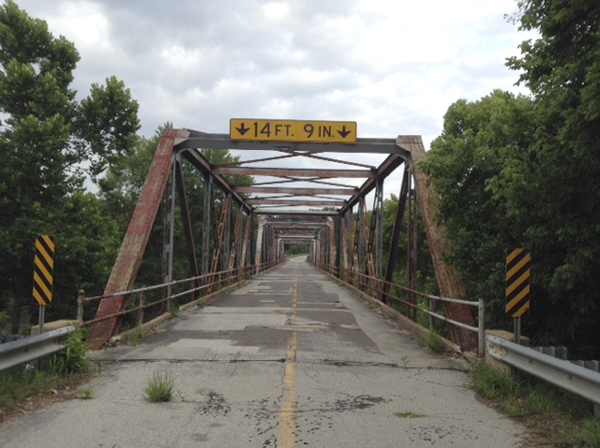 This steel bridge over the Gasconade River near Hazelgreen, Missouri was built in 1922. It is closed indefinitely, yet I had to get close to it and walk on it. Photo by David Freeze

Riding Route 66: Seeing the sights, chased by the rain People in Waynesville, Missouri thought this rock looked like a frog so they painted it that way. Photo by David Freeze

Last night, I had the real pleasure to spend the night in the Munger Moss Motel in Lebanon, Missouri. This is a 70-year-old motel with the best neon sign on Route 66, according to the owner. It is certainly the best I have seen. The room was tastefully decorated, and I really liked the bed. Last night’s sleep was the best of my trip.

I had resigned myself to endless climbing today through the Ozark hills, knowing that the pace would not be fast. There was nothing special on the agenda of towns coming up as far as I knew. I took off with no real expectations. My average pace for the first four hours was just a little over six miles an hour. Up and down, and over and over again.

Hazelgreen was just a little settlement with a big truck stop and a bridge that I was interested in. The Gasconade River Bridge was constructed in 1922 and has been closed indefinitely. In fact, the road to it is closed, too. The only solution was to put the cyclists on the interstate to go around it, and that should have been that. But once I saw the bridge from a distance, there was a certain compulsion to get a closer look. I pushed my bike through the weeds to the closed Route 66 section and then rode back to look at it. What a beautiful bridge! There is a local movement to save the bridge, not just replace it. I hope it works out.

Back on Route 66, I went to Waynesville for a peek at that town, I found a lot of history, some to do with the Cherokee Trail of Tears. There is a stream called Roubidoux Creek in town where the Cherokees camped when they were being marched to Oklahoma. The town has made a wonderful little park out of it. And just a block or so away is a building that was used as a stagecoach stop, a Civil War hospital and as a hotel. Waynesville is named after “Mad” Anthony Wayne, the Revolutionary War hero. Just on the eastern side of town is a big rock on the side of hill that has been painted as a frog, mostly because the citizens thought it looked like a frog.

Next was St. Robert, a town established in 1951. I didn’t see much else except a Dairy Queen, the first I have seen in several days. I didn’t stop this time. Fort Leonard Wood is close by and probably has something to do with the town getting its start.

My curiosity has been up about a place called Devil’s Elbow. I rode out to it and was not impressed. It is a narrow and sometimes curvy road with a nice one-lane bridge and good view of the Big Piney River. The climb back out was as bad as any on the trip so far.

At the end of the Old Route 66 segment for Devil’s Elbow, 66 then went back onto I-44. Clouds had started to gather off to the west and the humidity had been so high all day that my shirt was wet from 10 a.m. on. A few showers and serious-looking clouds were bearing down on me and even on the interstate, the climbing was slowing me down. I passed by Doolittle, named for the World War ll hero Jimmy Doolittle, but didn’t even take time to wave.

By this time, the rain was coming down hard and the wind was whipping, but usually in my favor. One of the gusts blew off my Route 66 cap and blew it over the guardrail. It was raining so hard and lightning was all around, so I just kept riding. My goal earlier had been to make it at least to Rolla, named for Raleigh, N.C., believe it or not. To make matters worse, my back bike tire was slowly going flat. I prayed that it would hold enough air to get me to shelter.

After counting down the miles, I walked across the ditch to go to an Econo Lodge where I got a good rate and an extra towel and headed for the room and dry clothes. I am here now with the bike tire just about flat. I will change the tube next and hopefully have it ready for tomorrow’s ride. St. Louis is about 120 miles away, or about two days’ ride.

Remember Tim and Linda Hoffner at Father and Son’s Produce as sponsors for my Route 66 adventure. Since I mentioned Fort Leonard Wood, the real Leonard Wood lives in Salisbury and is also a sponsor. Thanks to all of the sponsors for making this trip happen.

Now the rain has subsided, but more is forecast for tonight. I will get some food, maybe a little ice cream and change that tire. It is always better to fix a tire in the motel room. I think this is my third one like this. Those prayers for it to hold up for the last 5 miles worked. I had 62 miles for the day.

Back at it tomorrow, maybe headed for Sullivan, Stanton or St. Clair. St. Louis is getting closer. I will see you again from there!

STEM Academy continues to attract students in its eighth year

By Rebecca Rider rebecca.rider@salisburypost.com SALISBURY — It may be summer, but in an upper floor classroom at Salisbury High School,... read more