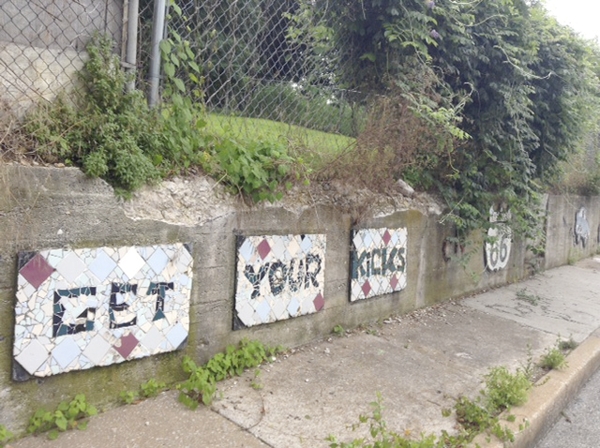 There is a long wall full of mosaics like this on Route 66 in Springfield, Missouri. Photo by David Freeze

The weatherman on a Springfield, Missouri, station this morning said he thought we might get lingering thunderstorms through most of the day, but that they wouldn’t start until about 8 a.m. I certainly make fun of the forecasters quite often, but this guy hit it on the head. So, as I write this, I am still drying out.

My room at Hood’s Truckstop Motel was amazing. The price was right, too, and the owners were great. Another good call or more a product of asking the right people. I am still not sleeping well, mostly from not winding down by bedtime.

I pedaled toward Springfield this morning, another city that I visited on my cross-country adventure in 2013. This time, I went right through the middle of it at rush hour and had no problems at all. Springfield has about 160,000 residents. The center of downtown is beautiful and well kept. I spent some extra time reading about yet another Civil War battle, this one with the Yanks coming out on top. Bass Pro Shops is based here and they have a “typewriter toss” each April on Secretary’s Day. They throw typewriters at a target 30 feet away.

My goal was to make Lebanon, Missouri, before too late this afternoon. When it started raining at about 8, I didn’t even get out my rain jacket. It was very warm, and it felt good to be wet. For a little while, it felt good. Gradually, as I left town heading into more Ozark climbing, the wind and rain started pummeling me pretty good. Plus, I thought I had missed a turnoff. I got cold again, but there was nothing to do but keep pedaling.

The first town was Strafford, small but an exit for I-44. I went in the convenience store, and it was so cold inside that I had to come back out. On to Marshfield, another town I met in 2013. This time, I just kept pedaling. Edwin Hubble, creator of the space telescope by that name, was from here.

Up and down I went, mostly up it seemed, and the afternoon started to drag on. I went through Conway and Phillipsburg, both totaling a population of just less than a thousand people. I saw nothing to stop for, but the farm scenery was wonderful. Cows, pastures, corn, everything farming looks spectacular. My Route 66 guidebook had virtually nothing to see in the towns I visited today.

It finally stopped raining just before Lebanon, just about the time the TV guy said it would. Karl Hales, Catawba College professor and football announcer, had been telling me about Lebanon. His boyhood home at 421 Adams St. was my second stop, just after the grocery store. Lebanon is a good mix of modern and historic, and I am staying in the Munger Moss Motel, one of the oldest and most famous on Route 66. My room is 70 years old, and it’s very well done, both classy and historic at the same time. I told one of my wives that once, and it did not go over well.

Last year on All-Star Game night, I was just across the river in Cincinnati where the game was held. This year, I am not close but will look forward to watching it on TV.

As the days go by, I have come to realize that this just might be my favorite cycling trip so far. There is still a lot to see, St. Louis, the Mississippi River and on into Grant Park in Chicago, now just less than 500 miles away.

While I was loading my bags with the groceries I bought in Lebanon, a guy named Mark walked over and asked about my ride. He said that he could never do anything like it, and as we continued to talk, Mark asked me to join him in prayer for my continued safety. We did that, hats off, heads bowed and eyes closed, and his words really touched me. I most likely won’t see Mark again, but I won’t forget his words.

After 75 grueling miles today, I have more of the same to look forward to tomorrow. Rolls, Missouri, might just be the target. I used the lowest gear on my bike more in the last two days than I did in the first 23.

I am going to find some ice cream, watch the game and catch up on emails. See you again tomorrow!

McClelland to serve to life in prison for shooting…