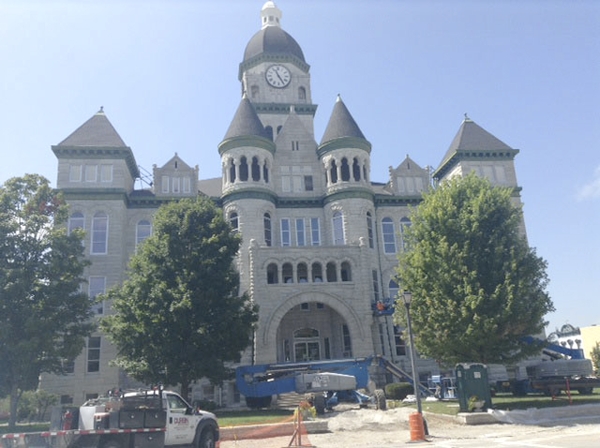 The Jasper County Courthouse in Carthage, Missouri, was constructed in 1894 and 1895. Photo by David Freeze This is the general store in Halltown, Missouri, near where Freeze spent Monday night. Photo by David Freeze

Last night, as soon as I submitted my story, I began to plan for today’s ride. The options looked pretty bleak right out of the box. The ride was going to be full of the Ozark Hills and the forecast was for hot and windy. Plus, I could see right away that chances for lodging or camping were limited. I thought I had a plan when I went to sleep after watching TV too late again. Then, when I overslept, I knew that it was going to be an extra tough day.

I had spent the night in the Baxter Inn and grabbed a little bit of their continental breakfast before hitting the road, all the while kicking myself for getting up an hour late. Right away, I decided to not rush and miss anything, and Baxter Springs is loaded with history. Anything Civil War excites me, and I had to go see the battle site of what was called the “Baxter Massacre.” Most of a Union detachment was wiped out on the edge of town in 1862, and many are buried in town,

Also, a rumor has it that Jesse James robbed one bank and tried to rob another. I looked for the right building but couldn’t find it. Baxter Springs was widely considered the toughest town in Kansas.

Next, I rode into Riverton and then on to Galena, Kansas. I did look around briefly in both towns, but the road was rough and I wanted to keep going. Kansas only has 12 miles or so of Route 66, but part of it is in need of at least some serious work. Galena did have lots of Route 66 murals and a great restored railroad depot.

On to Joplin, Missouri, for my second time. I rode through here in 2013 on my cross-country trip. This time, I came from a different way and struggled some on finding the right path through town. Joplin had a nice downtown, but no room for a bike on the streets and grates that run the wrong way for a bike to cross. My front tire actually fell down slightly into one of the grates but I don’t think it damaged anything. I got the help of a utility worker to get me back on track, and then I started to notice a better effort at putting up directional signs.

By this time, I was feeling the pressure of being late because the rolling hills had started and I was getting behind. I made it to Webb City and then Carterville. Webb City was a mining town after the discovery of lead nearby. Downtowns of both were nice, and the signs were pretty good denoting the Route 66 Historic Kansas Byway.

The next big town was Carthage and by then, I had a plan. The cycling maps called for going way off Route 66 because there was no shoulder to ride on. Two things about Carthage stood out. The amazing Jasper County Courthouse may be the best one I have ever seen in the U.S. It sits on the highest part of town, and there was all kinds of work going on around it today. I also noticed another very old motel with little carports for every room. The sign said, “A radio in every room.” That is another one that would have been fun to stay at if the time of day had been right. Marlin Perkins of “Wild Kingdom” was born here and there was also a Confederate victory here in yet another Civil War battle.

My plan was to ride Route 66/Highway 96 all the way to Springfield if I could make it. At first, there was about a 2-foot paved shoulder, and I was doing pretty good with that for about 10 miles. Then they threw in the dreaded rumble strips that leave very little room to ride. Mixing that with the constant up and down riding, I was losing ground on making it to Springfield in time to submit a story.

It was rather comical, because there were several towns listed coming up and I kept thinking that I could resupply along the way. I passed through Avilla, then a long ride to Phelps and finally to what I think was Albatross before I found a store or anything else. The sideways wind was back and pummeling me, and I was running out of water. The store at Albatross saved me, and the clerk told me about a great motel at a truck stop on down the road.

Back on Route 66, I stopped at the post office in Halltown to get some further directions. The postmaster was amazing, bringing me water and telling me where the motel was. After more Ozark riding for a total of 79 miles, I am in Hood’s Motel on I-44 near Halltown. The room has an open Bible laying on the desk and lots of other extras, too. Plus, the restaurant serves 24-hour breakfast at great prices, and the convenience store has ice cream.

Considering everything, this was a better day than I expected last night. I will ride through Springfield tomorrow morning and head on toward Lebanon. I love the people of Missouri, it is just the constant hills and those dastardly rumble strips that could be lessened.

Tuesday is my daughter Amber’s birthday. Wish her well if you see her. Also, thanks for the sponsorship from Skinny Wheels Cycle Shop. They have been a part of all my summer cycling adventures.

That is all for today, and already tomorrow is looking challenging. I will let you know what happens and I love all the emails. It is wonderful to have so many good people riding along!

SALISBURY — The flavors of Cheerwine and Krispy Kreme doughnuts have married. The wedding happened Monday when Cheerwine Kreme, a new... read more