Riding Route 66: Yet another fabulous day and a new state 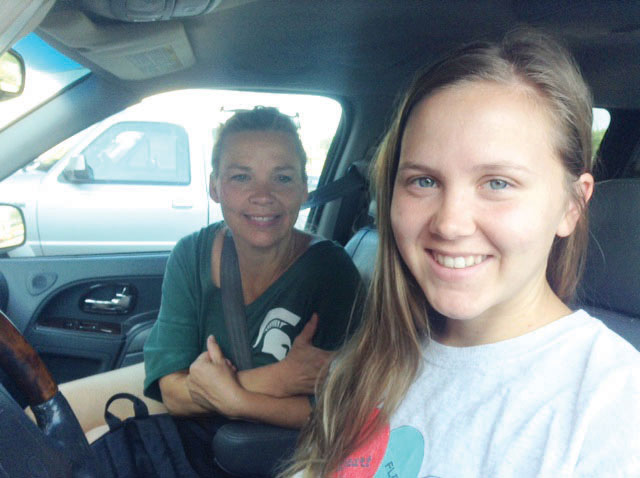 Stephanie Wolf (L) and her daughter, Danielle asked about Freeze's ride Sunday in Chelsea, Oklahoma. That got his day off to a great start. Photo by David Freeze.

After staying up too late last night in Claremore watching the Olympic trials and the end of the NASCAR race, I found it harder to get going this morning. I hated to say goodbye to the Claremore Motor Inn and the trains rumbling by. But the road was good, not much traffic was out and I had some hymns to sing.

So east on Route 66 I went. The first town was Foyil, famous for one thing. Back in the late 20s, a young runner named Andy Payne stunned everybody by beating much more experienced runners from around the world in the first trans-America foot race. The race was called the Bunion Derby and Payne’s story is amazing. I don’t thing this has ever been a movie but it should be. My first Gotta’ Run column when I get back home will include more on Andy Payne.

I did get two egg-and-cheese biscuits in the convenience store and directions to find Payne’s statue. The air temperature was warming quickly and I thought it was going to get hot later.

On through Bushyhead, which I never saw, and into Chelsea, a most remarkable town of about 2,000 residents. Two of those residents, Stephanie and Danielle Wolf,invited me to their church breakfast this morning and we talked about my ride. They also told me where to find the most interesting house on Route 66. I had information that the Hogue house had been bought for $16 in 1913 and delivered precut by Sears and Roebuck. Considering the price, I had already looked for a small house but it turned out to be a beautiful two-story house that still looks wonderful.

Chelsea is also famous for having the first oil well in Oklahoma. They struck oil in 1899. Also, Chelsea was at least the second town that had an underground passageway to get to the other side of very busy Route 66. The town also has a beautiful old bridge that is the last of its kind in Oklahoma.

Back on the road, I pedaled through White Oak and into Vinita. If I had been willing to take an out-of-the-way 6-mile ride, I could have seen a McDonalds that spans Interstate 44. Yes, you can  see the traffic going by beneath your feet. I didn’t go because there was much more to see. TV’s Doctor Phil is from Vinita.

The next town was Afton. There is a truck stop here and supposed to be some buffalo in a field but I didn’t see any. On to Miami where they were getting ready to pave a very long Main Street which just happened to be Route 66. I rode through and got a picture of Coleman Theatre on North Main.  Opening night was in April 1929, about six months before the start of the Great Depression. Performers who appeared here included Tom Mix, Will Rogers, the Three Stooges and Sally Rand.

An interesting thing about Route 66 in this area is that one of the early alignments was short on money when it was time for paving to begin. But instead of paving just half the distance, they paved the whole distance — but only one lane wide. This meant that drivers had to be on the lookout for oncoming traffic and be ready to drop the outside wheels off on the shoulder until the cars passed. This idea didn’t work for long.

I left Miami and headed for the town that I wanted to see all day. Commerce was up next, the birthplace of Mickey Mantle of New York Yankees fame. I had no idea that I would visit Commerce until about a week ago and have been excited since. Commerce has only about 2,500 residents and I had the address for Mantle’s boyhood home and knew that there was an impressive statue at the high school. After talking with a lady in the consignment shop, I found both. The house is very modest and still has the old tin building that Mantle belted with baseballs as a kid. There is a plaque on the door and period furniture inside but it is not open to the public. The statue is lit at night and is very impressive. Nobody else was around at either place. Mantle was my boyhood hero when I first started playing ball as a kid and I once saw him in person in Salisbury.

I passed through Quapaw without anybody noticing and then crossed into Kansas. I will only be in Kansas for a brief stay tonight and in the morning before going on to Missouri. I am in Baxter Springs tonight with a great deal at the Baxter Inn. The Adventure Cycling Route 66 decal is on the door of the motel. My mileage today was 86.

I have done no planning past today and will get something together for tomorrow. I have been to Kansas and Missouri before on the cross-country ride of 2013. I remember Kansas as especially hot and windy but I won’t be here long enough to notice this time. Missouri was very hilly with the Ozarks and I expect more of the repeating hills again.

One more thank you to Vac and Dash and Gear for Races for sponsoring this cycling adventure. Both of these companies are heavily involved in all of the Rowan County races and help all the charities that the races benefit.

That is about it for today. I promised some more information on Will Rogers. I realized that I couldn’t condense it well enough to do justice to Oklahoma’s favorite son. Rogers was a cowboy, an actor, a writer, a politician and so much more. He was also a proponent of aviation and sadly lost his life in a plane crash.

I will be back tomorrow with what happens on my next day of pedaling. Thanks again for riding along!