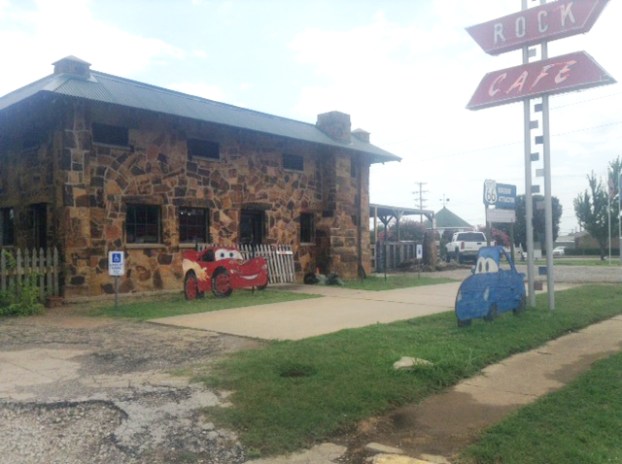 The Rock Cafe in Stroud, Okla., was built from the rocks that were unearthed when Route 66 was built. The cafe is on the National Historic Register after being built in 1939. Photo by David Freeze.

Riding Route 66: A heavy shower and a tiny one

On my 22nd day of cycling along Route 66, there was the first real rain I have seen. Oddly enough, the rain made for a nice day on the bike. The clouds kept the temperature down in the upper 70s, the wind was gentle, and the lightning made me excited enough to pedal faster.

I spent the night just outside of Oklahoma City last night in a nice Hospitality Inn. Another very restful night before I left out this morning ready to try and cross OKC during rush hour. First off, I got on some expressway by mistake and finally found my way off it and began crossing the city. I passed the massive 45th Infantry Museum, the ASA Softball Museum and a Firefighters Museum, all before 8 a.m. All of this just as the thunderstorms were getting close. Just after this, I got lost somehow but was not too worried since I knew my direction was easterly.

After riding out of town but on the wrong road, one guy told me what to do and two more told me something else. I stopped at a convenience store and the lady inside told me to just keep on the same road and I would run into 66. None of these were right, except probably the first guy whose directions I didn’t follow. Anyway, I finally joined Route 66 close to Luther after having totally missed Arcadia. Arcadia had a round barn that is now a gift shop that I will just have to look for next time.

Luther is a very small town of 1,200 but it does have a Sonic. Of interest to me was the historical marker that defined the starting line for the Oklahoma Land Rush in 1889. Two million acres were grabbed up, most of it by the end of the first day.

On to Wellston which had a Route 66B that went through the business district. I rode through the town that calls itself the Pecan Capital of the World but I am not sure why. The cafe was called the Pecan Cafe though. I came back out on a very busy Route 66 with a truckstop, Interstate 44 nearby and lots of people in a hurry. My first close call of this adventure happened when a man barreled through a four way stop without stopping, just when it was my time to cross.

It had been raining lightly and lightning and thunder began to get much closer. Heavier rain soon came, but off and on. The next town was Chandler, the best of the towns that I saw today. It had four of the old Route 66 gas stations fixed up and three of them were being used for new purposes. The fourth and oldest was my favorite, a very old Phillips station. Chandler also has the Lincoln Motel, a series of very old duplex bungalows built in 1939. If it was not too early to stop, I would have spent the night just for the experience. This was the only town where the rain was heavy. Chandler is also reputed to be the site of the last old West gunfight in 1924.

Just down the road was Davenport with a couple more of the old gas stations fixed up. Cafes seemed to work well in the larger ones. And finally, about nine miles later with plenty of climbing involved, I made it to Stroud. Since last night, I planned to spend this night in the Skyliner Motel, a 1939 motel with one of the best neon signs from all of Route 66 out front. I am here after 71 miles of lots of up and down but plenty of wonderful scenery.

Route 66 has finally become its own road with towns not dominated by the interstate. There are no shoulders most of the time and the traffic has been moderate and even heavy a few times. I’ve begun to get a sense of what travelers back in the ’40s and ’50s might have thought about this road as it used the Main Street of so many towns along the way. Oddly the trains have almost disappeared after being a constant from California through New Mexico. The tracks are sometimes nearby but I have only seen one operating train in the last two days.

Route 66 has now taken a slight northerly adjustment to its constant easterly direction for most of the trip so far. With that, I am just a few days from Kansas and then Missouri.

So tonight, I am in the smallest room of my trip. The shower and bathroom are tiny, but that is how they were 80 years ago. A few things are still here from 1939, like the checkout time notice. Plus, I can’t wait for the sign to come on. I will try to get pictures of it when it does. With lots of up and down pedaling over the next 10 days coming up, I am going to mail a few things home and get rid of a few pounds.

Tomorrow, if all goes well, I will pedal past Tulsa and near the Blue Whale. You will just have to wait and see what that is. I expect the heat and wind to return so I will be on the road early.

If you see Dr. Delaine Fowler or Dr. Tanya Williams, thank them for helping sponsor this adventure.

With that, another adventure awaits. See you tomorrow with the details. And it’s raining again.