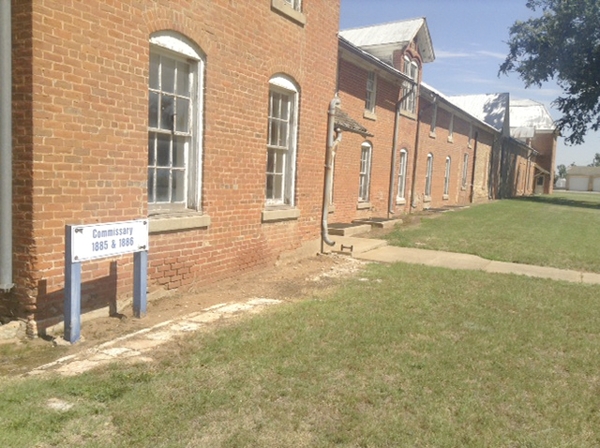 Freeze’s first side trip Thursday morning was to the remarkably well preserved Fort Reno near El Reno, Oklahoma. Fort Reno was a military camp, then outpost from 1874 through 1947. Photo by David Freeze This is a bridge that is now going to be part of a Route 66 park near Bethany, Oklahoma. It is the first large bridge that Freeze has crossed coming from the west. Photo by David Freeze

I ate so much more last night than on any previous night of this trip. I’ve never experienced such a wind on a bike before and realized that the physical challenge is much greater just staying upright. This morning, the weather forecaster on Oklahoma City’s channel said there would be even greater gusts today, and it would be hotter. In fact, the wind was already blowing at 18 miles per hour at 5:30 a.m.

I spent a good night at the Scottish Inn in Weatherford and planned to wait an extra 15 minutes before starting this morning. You guessed it, I just couldn’t wait and still hit the road at 5:30. Weatherford is a cool little town that does a nice job of highlighting Route 66.

The existing Route 66 after leaving Weatherford just didn’t seem to be there, so I jumped on I-40 and pedaled east. There were no towns on Route 66 anyway for the first 30 miles, and I got back on the route just before El Reno. I had read last night about the cavalry fort that used to be so important to the U.S. Army efforts in the West. Troops from Fort Reno preserved the peace and directed the orderly transition from Indian territory to individual farms and ranches. During World War I and World War II, the fort served as one of the three remount depots from 1908 through 1947. Specialized horse breeding and training of mules became the central focus of activity. These horses and mules were shipped to other parts of the world during the two wars.

There were two museums and many remaining buildings on the post. The first museum has to do with the history of Fort Reno, and the other was a sort of cavalry museum. Lots of attention went to the Confederate and Union cavalries in the Civil War, as well as the Indian wars which followed shortly after. I looked for various mentions and pictures of General Custer. One special horse should be easily remembered by many of us. Black Jack was the riderless horse that was used in President Kennedy’s funeral procession, as well as those of Hoover, Johnson and General McArthur. Black Jack was raised and trained at Fort Reno.

The next stop after a 10-mile segment of very good road was Yukon. Garth Brooks and actor Dale Robertson both called Yukon home. Yukon is a neat town of about 23,000 with lots of Route 66 signs and still a couple motels. But it is also a progressive town with lots of modern businesses along the way. I saw gas for $1.76 there today, the lowest yet. I hope it is doing the same thing at home. The famed Chisholm Trail, sending cows to the markets in Abilene, Texas, in the late 1800s, crossed my bike route this afternoon.

Next was a more upscale area called Bethany, and then Warr Acres as I moved closer to Oklahoma City. Lake Overholser is huge and, the wind was really whipping the waves on it. The biggest bridge that I have seen yet on Route 66 is part of a new Route 66 park.

My ride came to an end at 70 miles, just as I have reached the edge of Oklahoma City. Tomorrow morning, I will try to make my way through this town of almost 600,000. Drivers have certainly been very courteous all along the way, and so far only good horns in Oklahoma. Oklahoma City is full of interesting museums, but I will probably just keep pedaling because the wind and heat certainly build during the day. That is unless the Thunder wants to see my jump shot!

When I had to ride into the wind today, it was such a slow go. Riding back out of Fort Erie was a mile and a half into the wind. It took forever, but later this afternoon, at times, the wind moved just slightly behind me. I am hoping for more of that tomorrow. It was 101 and gusts reached 45 mph when I got in the room this afternoon. Still, it didn’t seem so bad. Tomorrow, the amount of towns will increase with eight to 10 on tap. Interstate 40 has left us now, and I-44 comes in the picture. I am hoping the Route 66 road stays good and I can stay on it.

Time for some ice cream and food, and then a little planning. Thanks for riding along and if you can, join me again tomorrow for more fun! Hope to see you then.

Blackberry Festival back for second year