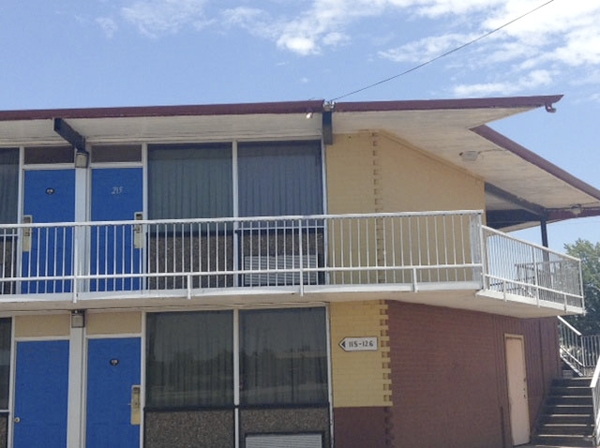 Elvis stayed multiple times in the top room on the right, room 215, at the Tradewinds Motel in Clinton, Oklahoma. Freeze was talked out of staying in the same motel. Photo by David Freeze Knowing that it was going to get very hot and windy as the day progressed, Freeze had stop and tour the Route 66 Museum in Elk City, Oklahoma. He could have spent at least half a day here, but only stayed for an hour. Photo by David Freeze This farm gate is made out of tools and farm parts, including the wheels and seats. Photo by David Freeze

I saw the weather forecast for Oklahoma last night, and it called for more of the same weather conditions. I thought yesterday was enough, but today was a carbon copy. More on that later.

My stay in the Day’s Inn at Erich, Oklahoma, couldn’t have been better. It was wonderful to be in a quiet place and just walk across the street to have plenty of food choices. I have often wondered if the maids think that five people stayed in the room because of all the food residue. I do treasure that time in the late afternoon and early evening, especially once my daily update is submitted and most of the planning for the next day is done. It is the most relaxed I am during the day, but my nights have been very restful.

This morning, I still rolled out in the dark and left Erick on Route 66 with blind faith that I would not hit anything in the road. I saw one vehicle in 13 miles but had a cloudy sunrise. That first part of today’s ride was mostly flat, and I found a McDonald’s just as I entered Sayre. After an order of pancakes, the customer service girl named Caren convinced me to do the online survey while there, and she promised to set me up with free coupons. I did it, but since I don’t drink coffee, all I got was a coupon for French fries.

Sayre is a nice little town with beautiful parks and clean streets. A permanent rodeo arena is right beside the community softball complex. After riding through Sayre, I realized that Oklahoma is much like home. People have nice yards, and they don’t fence them in. From California through New Mexico, everybody fenced in their yards with big gates. There was a lot less of that in Texas and almost none in Oklahoma.

On then to Elk City, a town of about 12,000 that sets the bar pretty high. They had a whole city block of museums together so that by parking in one place you could see them all. I loved the place, especially the National Route 66 Museum, but knew in my head that it was getting hotter and windier by the minute. I only stayed an hour and it could have easily been half a day.

Rolling past Canute, another nice, but smaller town, I took Route 66 into Clinton. A pattern has emerged that Business I-40 branches off and heads through the towns on the Route 66 main drag, before joining back up on the other side of town. In Clinton, I wanted to see downtown, but I mostly wanted to see the Tradewinds Motel. Elvis Presley stayed there multiple times in the same room, room 215. I considered staying there but read lots of very bad reviews, although I still didn’t rule it out completely until I saw the place and asked for some local input. Bottom line, the place is a dump and three women told me, “Do not stay there!” I spent some time talking with Barbara from Clinton and she gave me some great tips otherwise, so on I pedaled toward Weatherford.

Yet another Oklahoma town that I like is Weatherford. A sign at the city limits says that it is one of the 10 fastest growing towns. Not sure if this is in the country or Oklahoma. Main Street/Route 66 is very nice, and I think I have made a good deal on a place to stay. I’ve already found a unique place across the street called Braum’s that has an ice cream shop and a small fresh-market grocery. I got some groceries and am going back for that pineapple shake later. Also, Weatherford is the home of astronaut Thomas Stafford.

Back-to-back days of this wind have taken a toll on me. The weather folks say that the gusts can be 30-40 miles per hour. When they come, they pitch me sideways on the bike. It is a true sidewind, but at times, depending on the direction traveled, it can have the effect of a headwind or a tailwind. Those forecasters say the wind and heat are here to stay. I have 80 miles on the nose today, and the top temperature I saw was 96. It is conceivable that I will get close to Oklahoma City tomorrow. I hear they are looking for someone with a long-range jump shot to replace Kevin Durant.

Interesting today was that Route 66 started with four lanes as I left Erich. Two are in the process of being grown over but can be seen often. Later on, several times when I was supposed to try to follow the original road, it just disappeared. Once, it stopped and a dirt road took a hard right out into a dirt field. Barbara from Clinton told me to be on the lookout for more of this. The wind generators are back, spinning away just before I entered Weatherford. It won’t bother me to leave them and their windy conditions behind.

That just about does it for tonight. Thanks for all the email tips along the way. Keep them coming. If I don’t go see something, it is not because I didn’t find it interesting. But 10 minutes off the course by car is a minimum of an hour by loaded bike and another hour back. One example of that today was the Washita National Battlefield Park, one of General Custer’s places of fame. I’ve already said there is so much to see that I will have to return by car or truck and visit again.

See you again tomorrow after another day on the road!

By Shavonne Walker shavonne.walker@salisburypost.com SALISBURY — Hours after a storm tore throughout Rowan County on Tuesday, the cleanup began for... read more