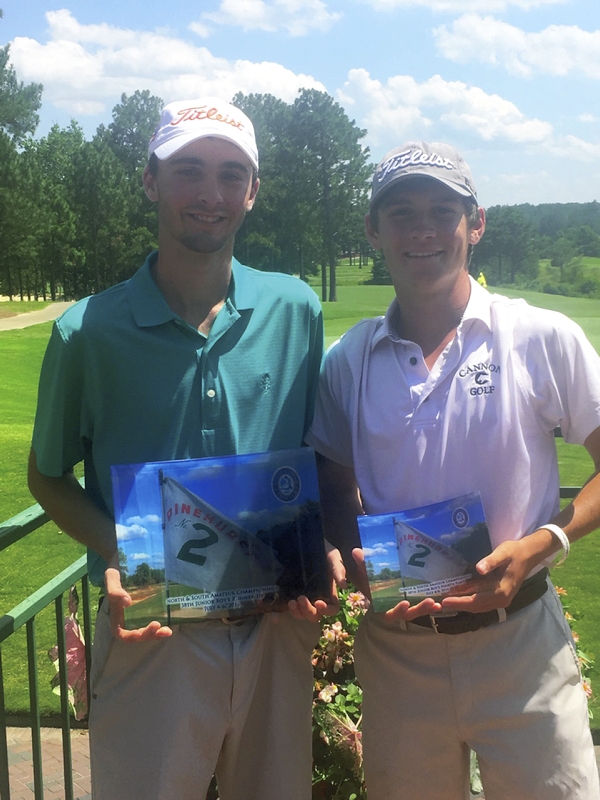 Salisbury’s Nick Lyerly and Michael Childress both shot under-par rounds on Wednesday to finish near the top in the 38th Junior Boys North & South Amateur in Pinehurst.

The two local teens’ performances are noteworthy, considering the field of 88 of the best junior players from across the nation and even some international golfers.

Lyerly finished in a tie for second place after firing a 3-under par 69 at Pinehurst No. 8. He had a three-day total of 214, tying him with Cooper Sears of Old Hickory, Tenn. Lyerly had been tied for ninth place after the second round.

Alberto Martinez, of Weston, Fla., won the championship with a three-round 212. Martinez was consistent during the tournament, with 71s on the No. 8 course on Monday and Wednesday, and an even-par 70 for Tuesday’s round at Pinehurst No. 2.

Childress climbed all the way from 14th place to a fourth-place tie, thanks to his one-under par 71 for Wednesday’s final round.

Stephen Carroll, of Concord, the two-day leader of the event after a 68 and 72, slipped into the fourth-place deadlock after a 77 on Wednesday. Carroll had one bad hole, suffering a quadruple bogey on the par-3 5th.

Also tied with Childress and Carroll for fourth place were Austin Harrill of Hickory, and Connor Creasy of Abingdon, Va. All were three-over par for the tournament at 217.

Tim Bunten, of Concord, Childress’ teammate at Cannon School, rebounded from Tuesday’s 78 with a 74, finishing in a tie for 19th place.

Throughout most of Wednesday’s round, Lyerly appeared on his way to the top spot. The rising senior at East Rowan sizzled through the front nine with four birdies, including two on long par-4 holes.

On the back, Lyerly had two pars before a birdie on No. 12, making him 2-under par for the round. However, trouble was lurking on the final holes. After a par on No. 13, Lyerly bogeyed the par-4 14th hole.

He parred the next three holes, but had a golden opportunity for birdie on the par-5 17th. He missed a very short putt there and then went on to bogey No. 18.

“I would have liked to have won, but it was a solid week,” said Lyerly, who has verbally committed to UNC Greensboro. “I thought that I would need a 67 to have a chance and it was right there, but I just couldn’t quite get there. But for the first 12 to 13 holes, I was hitting fairways and hitting greens and made it pretty easy on myself.”

Hard to believe, but Lyerly missed a two-foot birdie putt on No. 17, after coming out a sand trap with his third shot on the par-5 hole.

“I pushed it a little bit and and it make a 180 around the cup,” Lyerly said of the short putt. “That putt really hurt. I knew that I had one hole to play and hit a good drive on No. 18, but when you lose momentum, bad things can happen.”

Lyerly’s second shot “squirted right a little” and he ended with a bogey.

Childress, who had ended his round on Tuesday with three bogeys and a double-bogey, started Wednesday’s play with another bogey. But then Childress, a rising junior at Cannon School, had eight straight pars and then birdied No. 10 and No. 11.

Childress went on to pick up another birdie on the par-3 15th hole, but he finished with three straight pars to stay at 1-under 71 for the day.

A par on No. 18 to end the tournament was some of Childress’ best work. He hit his drive on the par-4 hole into a hazard. But he followed up with a 7-iron from 173 yards out and put the ball to within 15 feet of the hole, lying three due to the penalty. He made to the putt to end the event in style.

“That was a really nice way to walk off the course,” said Childress of his scramble. “And I felt like I was able to stay in it, even though I had some rough patches, especially the end of Tuesday’s round. Mentally, this week was probably one of my best performances. I had to keep grinding and getting myself out of trouble.

“The Pinehurst courses, especially No. 2, there are no ‘miss’ zones,” continued Childress. “If you miss the fairway, it’s really going to be hard. And even approaches to the green … you can hit a shot that you think is good but it isn’t. If you slip up at all, these courses will take advantage of your misses.”

Other than the quadruple bogey, Carroll had a decent round, including two birdies. A par on No. 5 instead of the 7, and Carroll would have had a one-over 73. To his credit, Carroll bounced back after No. 5 with three straight pars.

Martinez was as steady as can be, making only five bogeys in three rounds, and only one yesterday. He was a par-making machine, scoring just five birdies and an eagle during the tournament.

In the Girls Junior North & South Amateur going on at the same time in Pinehurst, Salisbury’s Grace Yatawara finished 73rd out of 87 players. She did have her best day of the tournament with a 80, but 30-over par for the three days is very unusual for the East Carolina-bound, two-time state 2A champion at Salisbury High School.

Lauren Beaudrea, of Lemont, Ill., won the girls’ championship with a 218, one stroke better than Micheala Williams, of Athens, Ala.

Kathryn Carson, of Mooresville and Lake Norman High School, finished in a tie for fourth place with a 222. Emily Hawkins, of Lexington, took seventh place with a three-day total of 223.

NOTES: Childress will attempt to qualify for the “Big I” tournament this weekend at Mid Pines while Lyerly is going to Sanford for an U.S. Amateur qualifier. … Both players are in the Junior U.S. Amateur, beginning July 15 in Tennessee. … Brian Lee, pro at The Warrior, was in Pinehurst for Wednesday’s third round. “Three local kids (including Carroll) in the top five in one of the top junior events in the country is phenomenal,” said Lee.

From staff and wire reports Rowan County’s Junior Legion team was down to its last out but rallied to win,... read more