Riding Route 66: Into Oklahoma, against the wind 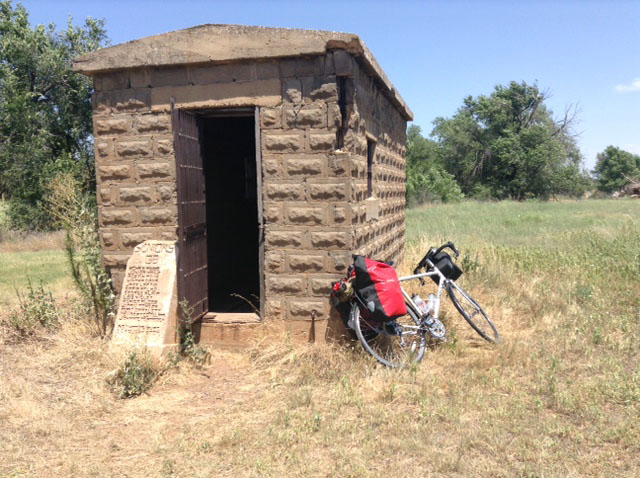 This jail was used for many years in Texola, Oklahoma. It is one cell and has a museum of sorts inside. Photo by David Freeze

King of the road? Not really, but I sure ended up in a town this evening that is famous for its country stars. Roger Miller, who had one interesting life, is from Erick, Oklahoma, and so is Sheb Wooley. I think they were in-laws, and Wooley taught Miller how to play chords on his guitar. Miller went on to be the bigger star, but both got streets named after them in Erick. Wooley did have a long-time role on the “Rawhide” TV series. It is the two streets that cross under the one stoplight, just my kind of town.

Today wasn’t quite like yesterday, but I couldn’t expect it to be. There were some similarities, though, and that started first thing. I was busting to get on the road, and right away, a major thunderstorm was doing its thing about 10 miles ahead. Even more lightning than yesterday, but I think that storm spawned an odd wind. Before another beautiful sunrise, there was virtually no wind, and the massive wind generators were not turning. I stopped to take a picture before dawn of the leaning water tower in Groom, where I spent the night. The water tower was actually built that way as a conversation piece.

This was supposed to be another non-hilly day, but that didn’t pan out so well. There were lots of rolling hills as I pedaled Route 66. The road builders of that time appear to have just laid the road over the existing terrain, much different than what I-40 right next to it looks like. The hills are more harsh on Route 66, dipping lower and going higher. No wonder so many cars broke down.

I had spent the night at the Chalet Motel in Groom, which was fine, used both of the convenience stores and went to Dairy Queen twice. Both times were for pineapple milkshakes, my first double header of this ride. The temperature hit 97 yesterday and 99 today, and is predicted to top 100 for the next several days.

After leaving Groom, the next town was Alanreed, a strange and quirky little place. There is little there now but a lot of abandoned buildings and one restored gas station. Alanreed used to be a town called Eldridge, and when the railroad came through, they packed up the town and moved to Alanreed. But first the town had names of Prairie Dog Town and Spring Tank. It was also briefly called Gouge Eye, which had something to do with a barroom brawl.

Next was McLean with lots of buildup on billboards along the road. What I found was another little town trying to hang on. It was thriving so much during the heyday of Route 66 that there are two lanes going each way opposite of the other two lanes going the other a block over. I stopped in at Lollie’s Diner for breakfast biscuits, and they were very good. Not much conversation out of the two ladies who worked there or the one other customer. Maybe it was the beard? The town does have a “Devil’s Rope” museum, another named for barbed wire.

Then on to Shamrock, another small town doing better because of the proximity of I-40. There were a lot of interesting motels and the chamber of commerce is in a huge remodeled gas station called the U Drop Inn. By this time, the wind was really howling from the south, and it was beating me up pretty good.

With just a 21-mile ride left, I hunkered down and kept pedaling against the pesky sidewind. Oklahoma was coming up, and I wanted to get the picture of the state sign. On Route 66, there was not one for Oklahoma but there was for Texas, so I had to pedal back out to the interstate and get my photo.

Texola was the first town in Oklahoma, and I hope there are not many more like it. Everything looked abandoned, with the existing population listed at 36. I did find the famous one-cell jail and self toured the inside. I kept an eye out for an ex-wife who might want to close the door. There were photos inside of lots of rough types who were hanged and one who was beheaded.

Back on 66, I took the long and lonely road to Erick, where I found two nice girls in the convenience store and another customer in the small grocery. Pleasant tips and conversation and a good rate at the Day’s Inn got me set up for the night. Erick is a town of about 1,000, but the biggest thing here is a Love’s Truck Stop right across the street from where I’m staying.

Tomorrow, I plan to push deeper into Oklahoma, maybe to Clinton or Weatherford. I-40 is still close by, but much of Route 66 still appears to exist through the state. Texas did a good job with it, too but a couple of places got so rough that I rode right beside it on the interstate.

The terrain now looks much more similar to home. Green grass and increasing trees, not enough yet, but getting bigger and stronger looking. A punishing 80 miles for the day was fine with me, and I hope the wind is more cooperative tomorrow. I will let you know what happens. More adventure awaits! See you tomorrow.

Friends flow in for Faith 4th