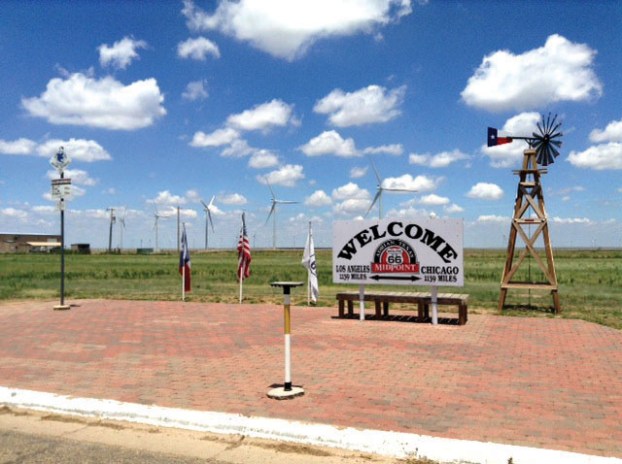 This is the official midpoint of Route 66, right across from the Midpoint Cafe in Adrian, Texas. Photo by David Freeze.

Riding Route 66: Rolling into Texas for some Elvis pie

My string of good choices on motels is bound to run out soon, but the Historic Route 66 Motel in Tucumcari, N.M.,was another positive. Thanks to Cathy Fulton for being a great hostess. I hit the road this morning not sure how far to ride today and planned to let things develop on their own.

There was a series of crossroads with a store or a truckstop every 15 to 20 miles and the lack of services has eased somewhat. I passed through crossroads or towns called San Jon, Bard, Endee and Glenrio before crossing into Texas. Most of the scenery was rangeland with very few trees and fefer cows.

Then came Texas and Glenrio, where I was able to ride on a long section of Route 66 that was in great shape. Glenrio was used in the film “The Grapes of Wrath” in 1938. Just before joining Route 66, there was a long, hard climb that finally topped out in a completely new environment. There were row crops and green pastures all around, plus lots of those big windmill looking wind generators like I saw in Canada las year.

I rode into Adrian, the actual midpoint of the most recent alignment of Route 66. A  tradition for anyone passing here is to stop in the Midpoint Cafe and get some of their trademark pies. The most famous is the Elvis pie that includes bananas, peanut butter and chocolate. I got a slice of it and one of pecan too. When the cafe first started making pies, they messed up the crusts. The ugly crust pies remain and sell for $4.50 a slice. The slogan of the place is “When you are here, you are halfway there!” The most widely recognized total distance for Route 66 is 2,448 miles although that does not include the Santa Fe version that was later removed because of political squabbling.

A tidbit about Adrian came from the manager of the cafe. He told me that there are only 166 residents but an average of 28,000 cows are in the nearby feedlot. I also read that the reason for all the windmills is because the Amarillo area is considered the windiest in the U.S. I have ridden for 15 miles of good Route 66 road and endless windmills. Both look like they will continue tomorrow. It is the first time that I have seen a section of Route 66 newly paved and with  Texas 66 logos on it. Maybe Texas will be good stewards of the road like Arizona was.

Still on Route 66, I rode into Vega, where I will spend the night in a Day’s Inn. I got a great deal from the manager as a Route 66 cyclist and especially for the Fourth of July weekend. Total mileage for today was 77 miles. Better yet is that my phone is now working and some WiFi issues  with my iPad seem to be cleared up.

Tomorrow is up in the air. I have a big plan to do some serious riding tomorrow but nothing is for sure. Today’s climbing and the visit to the Midpoint Cafe and Adrian were well worthwhile. By the way, as soon as I got to the motel room, I ate that Elvis pie. My gosh,it was good!

Now that the desert seems behind me, it is getting close to time to shave. But the grizzled look seems to be doing OK with those that I meet along the way. Just yesterday, a mom and her three kids stopped me to ask about my ride. They all were genuinely interested and smiled while asking questions.

Have a great Fourth of July and go to the Faith Parade. Looks like I will miss it again.

American spirit: Volunteer-driven Red Cross has proved itself in times of crisis