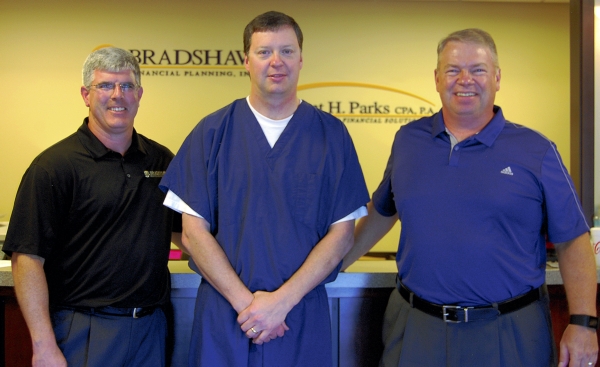 Amanda Raymond/Salisbury Post Trent Bradshaw (left) and Brent Parks (right) lease a space in their building to Dr. James Jolly (middle) for his dental office. The whole building has been renovated from previously housing a social security office.

SALISBURY — Trent Bradshaw and Brent Parks sat in the back of what used to be the Social Security Administration office in Salisbury. The building went to public auction when the social security office moved to another location, so Bradshaw and Parks decided to stop by.

“We said, ‘What the heck, we’ll just walk over and see what happens,’” Parks said.

The price of the building kept getting lower and lower, and eventually it dropped within Parks and Bradshaw’s price range.

They made their bid and purchased the 9,500 square foot building at 1816 E. Innes St., eventually renovating the entire space.

After growing out of that space, they rented a property from Sam Collins, of S.E. Collins Consulting Engineering, across the street from where they are now, just as the social security office was moving out.

Collins was the one who encouraged Bradshaw and Parks to go to the auction and try to buy the building.

Bradshaw and Parks moved into the building in December of 2013 after renovations that took about eight months.

When you walked through the front door, there was a lobby, a wall with windows that served as stations for social security office visitors and then empty space where cubicles probably used to be.

“It was an empty shell,” Bradshaw said.

Parks said the demolition was easy since there were no interior walls to deal with.

In the end, only a few walls of the previous building remained. Everything else was renovated.

What started out as empty space ended up turning into 14 offices and an education and conference room that can hold about 30 people. There is also a kitchen area that allows them to cater and host events on-site and a workout area for employees.

The building is also outfitted with updated technology for things like conference calls, something they did not have enough space for at the former location.

“We didn’t have any space across the street,” Parks said.

Another business that was running out of space was Dr. James Jolly’s dental office.

Bradshaw and Parks knew they did not want to use the whole building, so they started looking for other businesses who might be interested in some space.

Parks had previously done some accounting work with Donna Jolly, whose husband Dr. James Jolly is a dentist and owner of James K. Jolly, DDS.

Dr. Jolly and wife Donna moved to Salisbury in 2008. Jolly graduated from Ohio State University, which explains one of the patient rooms decked out in Ohio State Buckeye colors, photographs and flags. He has been a dentist for 22 years.

The Jollys needed more space for their office and ended up being the perfect fit for Bradshaw and Parks’ new building.

The dentist office moved next to Bradshaw and Parks in July of 2015, also from across the street. The floors had to be completely redone so specialty fixtures could go in, like water lines for the sinks.

The renovations took four months. Now the space has six operatories, two offices, a full kitchen and an X-ray room.

Donna Jolly said although it was scary leaving a location the office has occupied for seven years, she said it has been worth it.

“It was definitely a really good move and we’ve gotten good feedback from our clients,” she said.

Bradshaw and Parks used local companies for the renovations of both spaces, including Summit Developers, Inc., Vertex Construction Company, Landscape Concepts, Inc. and architect Bill Burgin, with Sam Collins providing another pair of eyes along the way.

Bradshaw and Parks even have photographs of Salisbury landmarks and other areas hanging on the hallways and conference room.

The only problem with the space is those six or seven people who walk into the office looking for the social security office. But for them, Bradshaw and Parks have flyers with the new address, 1840 Jake Alexander Blvd. W., and directions.

By Rebecca Rider rebecca.rider@salisburypost.com SALISBURY — For space enthusiasts, 1957 was a good year. It was the year Sputnik launched,... read more