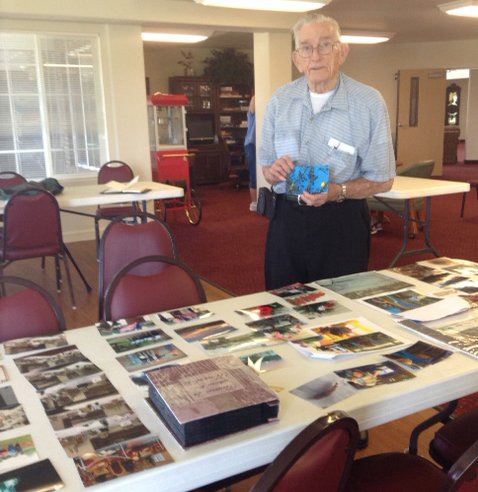 SALISBURY — When Mary Jo Simpson’s parents wanted photographs with their Christmas letter, they used some taken by Walter Leather.

“There were family gatherings that I only have photos of because of Walter,” Simpson added. And when her father passed away, “Walter came to the federal hospice at the VA and also took pictures at the funeral.”

Leather is a resident at Oak Park Retirement, and he’s become the community’s official photographer.

Leather takes photos of everything at Oak Park and makes copies for the residents, all at his own expense. He’s been doing this since arriving at Oak Park as one of the earliest residents some seven years ago. Walter keeps copies of about 10,000 photos in his apartment.

“He makes pictures and I try to pay him, but he will not take money,” neighbor Dot Kobe said. “I thought I was married to a stubborn man. I am a New Yorker too and have lived near Walter for one and a half years. He’s a sweetheart, but more importantly, I couldn’t have a better one.”

Kobe is just one of the large group of residents who count themselves as members of an unofficial fan club Leather has gathered since arriving at Oak Park.

After serving in the US Navy during World War ll, Leather lived nearly 40 years in New York City while employed as a plumber. When the time was right, he and his wife Doris moved to Salisbury and Oak Park Retirement to be near his daughter Carol Aycoth and her husband David. Doris, Leather’s wife of 65 years, recently passed away, and Leather’s friends have been nearby.

“They all have become family and know what he is going through,” Carol Aycoth said.

“I didn’t take as many pictures before I came here, but now I always have my camera with me,” said 90-year-old Leather. Activities director Karen Leonard “asked me if would take pictures. She watches the schedule and I know what is about to happen.”

And other residents appreciate him for that. One after another, they come forward with examples of how Walter has touched their lives. Martina Stonehouse, on her own 90th birthday, said, “To have him as a friend is wonderful. He’ll do anything for you and is an asset to any resident.”

Recently widowed Bette Bartholomew added, “I have always enjoyed him. He is an extraordinary person with real gift of timing. Sunsets, flowers, people, it doesn’t matter; he just observes, and at the right time he moves in. I admire him. Sometimes I thought he was ornery, but he is a sincere and kindly man.”

In fact, the word “ornery” comes up more than once.

“I once asked him why he didn’t make friends with another man who recently arrived at Oak Park,” Kobe said. “Walter responded that the new resident was just an ornery old man. I thought this this was a perfect example of the pot calling the kettle black.”

Residents also know that Leather is extremely concerned about safety and keeps an eye open for hazards.

“He is always concerned about our safety. He wants others to follow the rules and when they don’t, it upsets him,” Irene Moeller said.

Ronnie Steele added that every night, Leather “goes around and checks the doors. He asks that walkers be left in the right place and just might take a picture of one left in the wrong place.”

Leather does other things too, such as helping to decorate and take down displays for special occasions, helping with a garden project and cleaning and keeping feed in blue bird houses.

But it is the photography where Leather has made his mark. U.S. Army Manhattan Project veteran Hall Steele said Leather “is totally responsible for keeping a history of what happens here, and he always give us a copy.”

Harvey Dezern, a 21-year Army veteran said, “I wore my uniform on Memorial Day and sang ‘God Bless America.’ Walter got the picture and gave it to me. I had no idea he was even taking the photos.”

Now often using a tripod to steady his photography because of a tremor, Leather makes sure to ask before taking pictures at events such as the Bartholomew funeral.

Other Oak Park residents worry that Leather spends too much of his own money on the photos. But, he says, “the manager at the Walgreen’s on Jake Alexander is very good to me.”

“His photos are central to our newsletter and the residents often paint them in the art room,” she said. “Walter’s heart and mind are his lens and camera. He shares the photos out of the goodness of his heart.”