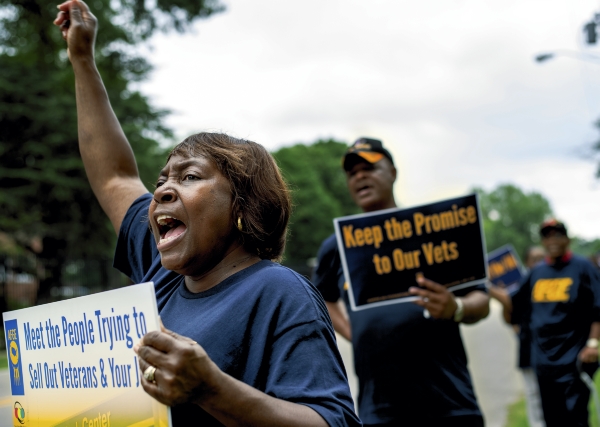 SALISBURY — When Rosetta Sloan decided to switch jobs in the 1980s, she was mostly looking for stability.

Sloan, who worked at a mill in Salisbury, decided to take a job at the W.G. “Bill” Hefner VA Medical Center. She has now worked at the Salisbury VA for more than three decades.

“At that time, mills were opening and closing and opening and closing,” Sloan said on Thursday. “My husband told me ‘if we ever want to own our own home and raise our children, we’re both going to have to have stable jobs. So, I decided to come to the VA. It was a good job.”

Standing outside of the gates of the Salisbury VA, Sloan joined about a dozen other people who participated in a rally against the possibility that veterans’ health care would be shifted further toward private providers. When speaking to the Salisbury Post, some participants in the rally raised the possibility that VA hospitals across the country could close because of access to private facilities.

American Federation of Government Employees union National President J. David Cox said he is specifically concerned about a group called the Commission on Care, which was scheduled to deliver a report to President Barack Obama on Thursday with recommendations about health care for veterans. A draft of the Commission on Care report recommends increasing access to private providers. Cox expressed concerns that the final report’s recommendations could lead to the closure of VA hospitals.

Cox and other attendees of Thursday’s rally said the current choice program takes money away from VA hospitals that could be used to hire additional physicians. Private providers also don’t provide the best care for veterans, he said.

“When you talk about veterans’ choice, you’re talking about them getting out of a line, where they’re somewhere in the line, to go to the back of a line at a private provider,” Cox said.

David Fleming, an Army veteran who has worked at VA facilities in Salisbury and Hickory, said the quality of the care he receives at VA hospitals is routinely better than a private clinic. Fleming said he would rather wait for an appointment at a VA facility than go to a private provider. However, Fleming said he’s never experienced lengthy wait times.

The draft Commission on Care report’s executive summary states that the quality of VA health care “is generally comparable to that of the private sector and by some measures superior, but it is inconsistent from facility to facility and serves some populations better than others.” Access to care remains a problem in parts of the country, the draft report states.

Essie Hogue, who leads the local chapter of the AFGE union, said VA hospitals are also able to deal with veterans’ issues in a manner that private providers cannot.

“When we get someone who is having mental problems, we do not call the police to lock them up because we know how to deal with them,” Hogue said.

In the wake of recent scandals involving VA wait times, Hogue said proper oversight of the VA is needed. If run properly, however, she said an adequately staffed VA would eliminate the need for the choice program.