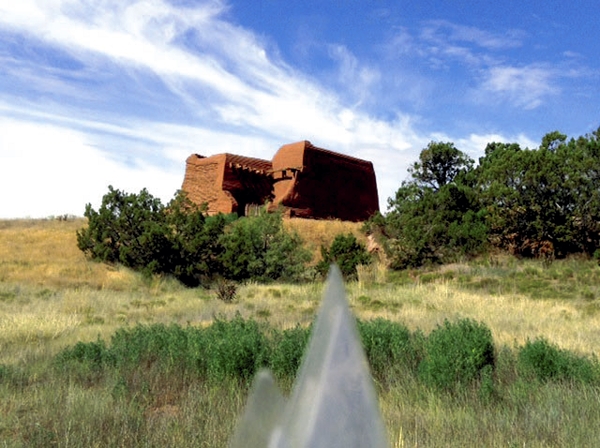 This is the remains of the most recent Spanish Mission Church that is on the grounds of the Pecos National Historic Park. It is definitely worth a visit if you are in the area. Photo by David Freeze.

Riding Route 66: A day that started with rainbows

I left the King’s Rest Court motel this morning with lots of clouds in the sky and a forecasted chance of rain. Just as if I was in Montana, the rain showers could all be seen miles away but none close by. As I climbed toward Glorieta Pass, I saw several magnificent early morning rainbows and they helped fuel my energy.
Glorieta Pass is the highest point on all of the Route 66 alignments, the one I was riding on today being the pre-1937 version. Glorieta was famous for lots of things, including having the early Indians, the Spaniards, and the settlers pass through. There was a Civil War battle in March of 1862 fought nearby, something that I had never heard of. A Texas Confederate contingent was sent to capture Santa Fe, which they did, and then they were headed for the riches of Colorado and California. The rebel force was confronted by a Union detachment from Colorado who managed to win the two-day battle after which the rebel force retreated and left New Mexico. It is referred to locally as the “Gettysburg of the West” because if the rebel force had not been stopped at that point, the outcome of the war in the west could have been changed significantly.
I then rode on through Pecos, a small town that has the Pecos National Historical Park, due in fact to the things that I have previously mentioned and more. There are ruins of two Spanish colonial missions as well as some remaining ancient pueblo ruins. The very old pueblo ruins, once home to 2,000 residents, were not abandoned until 1838.
Past that, I rode a lot of challenging miles through another of those areas with no services. This time, the map says limited services for 96 miles. That is why I am in a campground and have food only from a convenience store, plus I am hoping that I can get this story submitted. I am in Romeroville after 67 miles. Stormy weather is all around us and there is already some drizzle falling. This might be an interesting night before all is said and done. The forecasters in New Mexico are calling for chances of heavy rain over the next few days but if it does, you can see it coming.
I will be heading for Santa Rosa tomorrow and more of a sense of normalcy. It seems like I am a long way from real civilization here. I stopped at the convenience store, which has a Subway. The employees had never heard of Subway Rewards, and asked how I got one of the cards. After cycling through more than 35 states, this was the first time that this has happened.
Catching up on a couple of things is appropriate. I mentioned Madrid, N.M., yesterday and was reminded by a reader that the bar scene in the movie “Wild Hogs” with Tim Allen happened there. Also, another reader found that Route 66 was actually decommissioned as part of the U.S. Highway system in 1985. I will check the day and month and report that tomorrow. As I mentioned, some places the road looks great and portions are just gone.
My stay last night in the King’s Rest Court Motel was great. I mentioned that it was built in the late 1930s and forgot to mention that each room has its own carport. That was so cool having the commode in the little room of its own.
Also, I rode some on the old Santa Fe Trail and the Pecos trail this morning since Route 66 was laid over parts of both. I saw what are said to be covered wagon ruts in the baked mud at the Pecos Historical Park.
I am going to close now and see if I can get this sent into the Post. After a lot of uphill riding, I look forward to at least some downhill tomorrow. I will be on the oldest portion of Route 66 in this area in the morning and then join up with Interstate 40 briefly to get to Santa Rosa, leaving just one more full day in New Mexico if all goes well.
I will plan to join you again tomorrow.