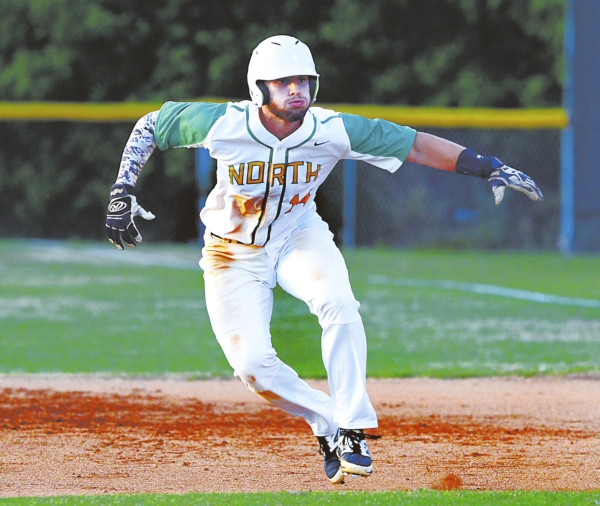 Wayne Hinshaw file photo/for the Salisbury Post ... Jake Pritchard, taking a lead off of first base during North Rowan’s 7-1 win over Salisbury on April 26. Pritchard has announced that he will continue his education and baseball career at Lenoir-Rhyne University.

SALISBURY — Jake Pritchard’s parents, Brian and Suzette, knew as early as the Coach-Pitch ranks that their son might have a future as a catcher.
While other 6-year-old catchers kept a safe distance from hitters, Jake stuck his nose in so close to the batter that the umpire had to yank him back.
That willingness to compete would make Pritchard an outstanding football and baseball player at North Rowan High School, and he was arguably the best multi-sport athlete in North’s 2016 graduating class. He also finished in the top 10 in his class academically.
Pritchard is a catcher on the current Rowan County American Legion team, and he’ll head to Lenoir-Rhyne University to continue his baseball career and education. His goal is a degree in exercise science, followed by graduate school to become a physical therapist.
Jason Sparger, North Rowan’s catcher in the mid-1990s and a former Lenoir-Rhyne player, had something to do with Pritchard heading to Hickory. Sparger was instrumental in Pritchard’s development as a catcher and he also was key in Lenoir-Rhyne baseball coach Tom Fleenor making a recruiting pitch for Pritchard.
“Coach Sparger talked me up to Lenoir-Rhyne,” Pritchard said. “I had some contact with UNC Wilmington and Gardner-Webb for a while, but Lenoir-Rhyne was the most interested and recruited me the hardest. Coach (Tom) Fleenor sent me a lot of texts.”
One of Fleenor’s recent texts — “It’s awesome to be a Bear” — welcomed Pritchard to the Lenoir-Rhyne family.
North Rowan’s connections with Lenoir-Rhyne go way back. Burt Barger, who was North Rowan’s first football coach, was a football and baseball standout in the early 1940s a Lenoir-Rhyne. Former Cavalier Shannon Myers was a two-sport hero and a Hall of Famer for the Bears in the 1990s. The list of Cavaliers who did well at Lenoir-Rhyne includes Sparger, Chris Sifford and Steve Roof, among others.
Sparger isn’t reluctant to sing Pritchard’s praises. Pritchard plays the game the way it’s supposed to be played, and he has an old-school sense of responsibility .
“Jake’s work ethic has brought him a long way and will continue to take him a long way,” Sparger said. “His work ethic is unreal. You just don’t see a lot of kids now who will work like he does. He’s the only kid who’s ever called me when it was 96 degrees outside and wanted to go block some balls.”
Pritchard is listed at 190 pounds and his arms look like those of a comic-book superhero, but he was not physically imposing as a high school sophomore. Steve Williams, North’s defensive coordinator had a lot to do with encouraging Pritchard to get stronger. Pritchard had enough speed to play defensive end for the Cavaliers, but he was going to have to get bigger to survive.
He did.
Pritchard thought he’d probably be on the jayvee team as a sophomore on a powerhouse North team that went 13-1 and was ranked first in 2A most of the season, but he worked his way up to varsity backup. Then stud Shane Parker got hurt, and Pritchard was on the field for a big early-September game with Statesville. Pritchard made the hit that caused a fumble near the goal-line, a play that swung a wild game in North’s favor and propelled North to the top of the polls.
Pritchard’s football career took off from there. His junior year he was All-Central Carolina Conference. His senior year, he was first team All-Rowan County as well as All-CCC. In three varsity seasons, he amassed 21 sacks and 172 tackles. As a senior, he had nine sacks, forced three fumbles and recovered four.
“I don’t have any doubt that if he wanted to walk onto Lenoir-Rhyne’s football team he could,” North football coach Ben Hampton said.
Pritchard’s father played college football at Butler University in Indiana and it was football that helped make Jake bigger, tougher and more physical.
Still, his heart never strayed far from baseball.
“Baseball has always been my passion,” Pritchard said. “It’s what I want to do.”
Pritchard was a four-year starter for North Rowan’s baseball team. He batted .358 for his career. He accounted for 83 career hits and would’ve reached 100 if a shoulder injury hadn’t severely limited his junior season.
As a senior, Pritchard enjoyed his finest season, and he helped lead the Cavaliers to the CCC championship. Pritchard was voted the CCC Player of the Year by the league’s coaches and was first-team All-Rowan County. As North’s leadoff man, he led the county with 29 runs scored. He ranked in the top five in the county in doubles (11), batting average (.425) and on-base percentage (.524).
“He was the backbone of our team, and when Jake got hot, we got hot,” North baseball coach Aaron Rimer said. “I know it’s unusual to have the catcher leading off, but he was our best runner and he got on base.”
Pritchard said the highlight of the season was the three-run homer he belted on April 15. He walloped a 3-1 pitch against East Davidson that turned that CCC game around.
“We weren’t hitting and morale was pretty low before that homer,” Pritchard said.
Defensively, Pritchard has come a long way from the kid who couldn’t get the ball to second base in the air when he first played on diamonds with 90-foot base paths. But the have been a lot of practices and a lot of weightlifting since then to make him who he is now.
“Jake made the greatest physical transformation from freshman year to senior year of anyone I’ve ever seen,” Hampton said. “I’d ride by the weight room on a Sunday afternoon and I’d see his car there. And then you look up and the next week he’s brought two or three more guys with him.
Pritchard appreciates all of his coaches and their efforts to make him better.
“Even when we worked out at 6 a.m., Jake always put his nose down, did the work and never complained about anything,” Rimer said. “Lenoir-Rhyne is very lucky to get him.”