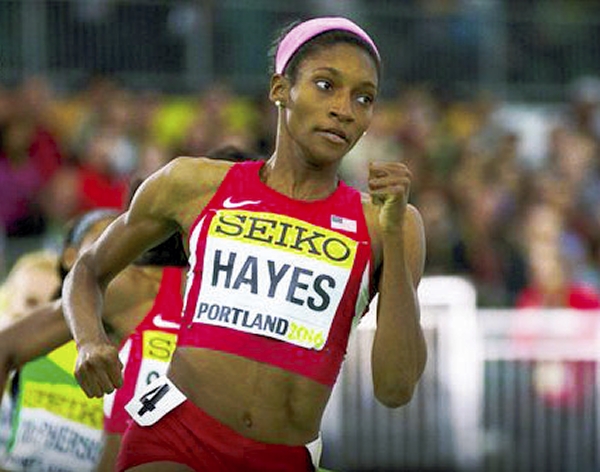 SALISBURY — Livingstone College graduate Quanera Hayes made a successful first attempt at earning a spot on the United States Olympic team Friday night when she competed in the 400 meters at Hayward Field in Eugene, Oregon.

Hayes finished first in her heat with a time of 51.79 seconds and had the seventh-best time during the first round. She defeated 2012 Olympic champion Allyson Felix in her heat and advances to Saturday’s semifinals.

Hayes, who earned a bachelor’s degree in English from Livingstone in 2015, would become the school’s first graduate to compete on a U.S. Olympic team. The Olympics will be held August 5-21 in Rio de Janeiro, Brazil, and will be broadcast by NBC.

“I feel that Quanera has a great chance to make the U.S. Olympic team as an individual and as a finals relay member,” said Livingstone head track and field coach Justin Davis. “I’ve had the pleasure of watching her compete for the last five years and know how driven she is. Quanera is the future of women’s 400 meters racing, and it so happens that she’s gotten the opportunity to have one full professional season under her belt before competing in the Olympic trials.”

Davis said in April that Hayes ran an amazing time in the Bahamas to place her in the top three in the world in the 400 meters. He hopes she carries that momentum with her tonight in Oregon and throughout the weekend.

Hayes, who won three national titles in the 400 meters and one in the 200 while at Livingstone, will look to advance to the 400m finals on Sunday. She has the third fastest 400m time in the world (second best among U.S. runners) this year with a 49.91 (career best performance) at the April 16 meet at Nassau, Bahamas.

“She comes in with the second fastest time this year in the U.S. in the 400 meters, and given the fact that she now has one full year of professional competition, I feel she’ll be able to get through the rounds very well and make the U.S. Olympic team.”

Hayes is also competing in the 200 meters this weekend.

Track and field athletes will be vying for top-three finishes and spots on the U.S. team through July 10 in Eugene. Competition will be broadcast on NBC, NBCSN and the NBC Sports app.

The semifinals are on Saturday and the finals will be held on Sunday, beginning at 10 p.m. (Eastern time).

“We are very proud to have a Livingstone graduate competing for a chance to represent the United States at the 2016 Summer Olympic Games,” said President Dr. Jimmy R. Jenkins, Sr. “It was a joy watching Quanera run when she competed for Livingstone under Coach Davis, and I am excited about tuning in to see her. The entire Livingstone College family is behind Quanera, and we anticipate celebrating Sunday night after she earns the right to go to Rio.”