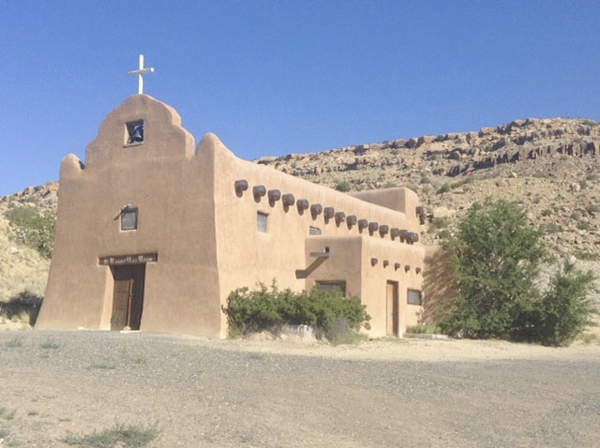 This is the Catholic Mission Church in Paraje, New Mexico where Salisbury's Doreen May grew up as a Laguna Pueblo Indian. Photo by David Freeze

I spent last night in Grants, New Mexico, one of those little towns that I like when I first see it. Clean, just busy enough and lots of friendly people. I met Dr. Mac Bridges, whose mother Jeannie lives in Salisbury. Mac’s mom had been keeping him updated on my ride and I got some email tips and an offer of a free meal from Mac. We had time to go for a nice meal and had a wonderful conversation about how he ended up in Grants and how I came to be riding my bike on these adventures.

Also, if you ever go to Grants, stop at the Southwest Motel. Now in my 14th day, I got the best deal for the room on the trip so far. Then this morning, when I was trying to get ice for my water bottles at 5:30, one of the owners made a special effort to get it for me.

I started off riding on Route 66 this morning out of Grants, then joined I-40 briefly before going back to 66 in search of something special. Doreen May from Salisbury is a full-blooded Laguna Pueblo Indian, and I was going right by her village. Doreen had shared a lot about the history of her tribe and herself. I took some pictures in Paraje and then got back on the road, passing New Laguna and then Laguna. Lots of friendly folks waved to me.

Then, once more I had to get on I-40 and the frontage road which at one time had been Route 66. I saw Nicholas from yesterday twice today and imagine that I will see him and his group again tomorrow. They are all headed to St. Augustine.

We all rolled into Albuquerque in mid afternoon after a day of battling lots of rolling hills, a couple of big hills and a fierce headwind that later thankfully became a side wind. I wanted to see where Route 66 came into town and knew that I would go through the center city on the way to a needed stop at the bike shop before ending at another historic motel.

I had 70 miles when I entered the outskirts of Albuquerque, and 12 miles later, I had made the stop at the Two Wheel Drive bike shop and finally another great room at the Hiway House Motel, built in 1959. I am near the University of Mexico and there are lots of trendy shops, restaurants and college hangouts. I will go walk around some later.

A couple of interesting things happened today. I stopped about midmorning at a truck stop McDonald’s and read the sports page of their local newspaper. With brief mentions of baseball and NASCAR, the sports section was dominated by rodeo news. One winner from this past weekend was going to an upcoming National Finals event and said, “My horse is really excited and ready for this opportunity.” I love rodeos too and hope to catch one somewhere before I complete this bike ride.

The other thing happened just after I stopped to talk with Nicholas this morning. We happened to have just climbed a serious hill and looked out over a panorama of open country and amazing rock formations. We talked about how there had to be a God to have made something so beautiful and how fortunate we are to see this scenery from our bikes.

After 82 miles today, I hope to make it to Santa Fe, New Mexico, tomorrow. Maybe the wind will have died down some by then. Right now, I am thinking three more days in New Mexico and then on to Texas. It was warm today, but only in the mid 90s and nothing like before. With that, I will go explore Albuquerque and let you know what I find tomorrow. Thanks for checking in.