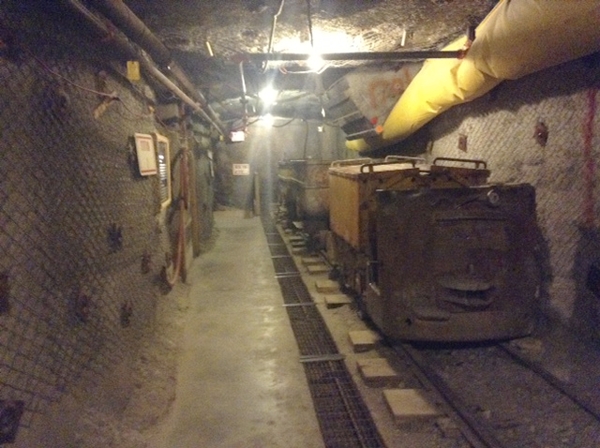 There is a replica of a uranium mine in the visitor center at Grants, New Mexico. Freeze saw it Monday afternoon. Photo by David Freeze Freeze crossed th Continental Divide on I-40/Route 66 Monday morning. Right after that, he had a flat. Photo by David Freeze

Sunday was not my best day. I passed up two dozen motels with much better rates to stay at the El Rancho Hotel in Gallup, New Mexico. I figured my first night in the state ought to be special and several hundred Hollywood stars wouldn’t steer me wrong, would they?

The place is huge, and all the upstairs rooms have some famous star’s name on the door. I saw Gene Autry’s door and plenty more. Then things started to happen. The WiFi wouldn’t work in the room, and I had to go to the lobby to connect. The TV was old and had only limited channels. The restaurant was way overpriced, this time a grilled cheese would have cost $9.30. On the plus side, the bed was good and the shower had plenty of force. I think the place is living off its past and needs to update to stay relevant.

One really funny thing happened during one of my lobby visits. There were two women’s public bathrooms and there was at least one large event going on in the ball room. Both of the bathrooms were out of order and being worked on, and if the women complained loud enough, they got the key to Gregory Peck’s room to use the bathroom.

I was ready to go really early this morning, too early for the sun. Now that I have traveled east and the days are shorter, the dawn is coming a little later. There were two options for riding this morning. One of them was to follow I-40 and then Route 66 with a final destination of Grants. Grants is named after the Grant brothers who played a large part in getting this town started. I believe they were mostly involved in ranching and mining, at one time employing as many as 4,000 men,

The other option was to follow Adventure Cycling’s route for the day, which had plenty of sightseeing but almost none of Route 66. I chose the more direct route, even though I was warned ahead of time about rough road shoulders and serious climbing over the Continental Divide along the way. The shoulders turned out fine except for one very rough patch, and the climbing was not as bad as what I experienced in the Petrified Forest National Park.

On the way to Grants, I passed Fort Wingate, which was established in 1862 as a base for Kit Carson’s campaigns against the Navajo. Carson rounded up thousands and marched them 300 miles to Fort Sumner in what became known as the “The Long Walk.”

Two more things happened before my arrival in Grants. I crossed that Continental Divide and stopped to take a picture of the actual marker. Right afterwards, I thought my front tire was making an unusual noise and realized that I had my first flat of the trip. Thankfully, I had all the stuff and got back on the road shortly, but not before stepping on a fire ant hill. I’m sure the people driving by had a laugh at my dancing.

Right afterwards, I met Nicholas Bloissa, who is pedaling with a friend to St. Augustine. They have a van following them. Nicholas has already had five flats since leaving Santa Monica. I plan to see them again later.

Grants was first settled in 1872. It has a long main drag of Route 66 which is called Santa Fe Avenue. Uranium was mined here, and I saw an exhibition mine as soon as I arrived. One of Elizabeth Taylor’s husbands, Mike Todd, was killed in a plane crash near here. I am comfortably settled in the Southwest Motel with a much better room for half the price of what I paid yesterday.

As of now, I plan to try for Albuquerque tomorrow with a couple of short side trips along the way. I will work on some planning tonight. See you again for what happens tomorrow!

By Josh Bergeron josh.bergeron@salisburypost.com MOUNT ULLA — It was the early 1970s, Ralph Brown was still a novice and he unknowingly... read more