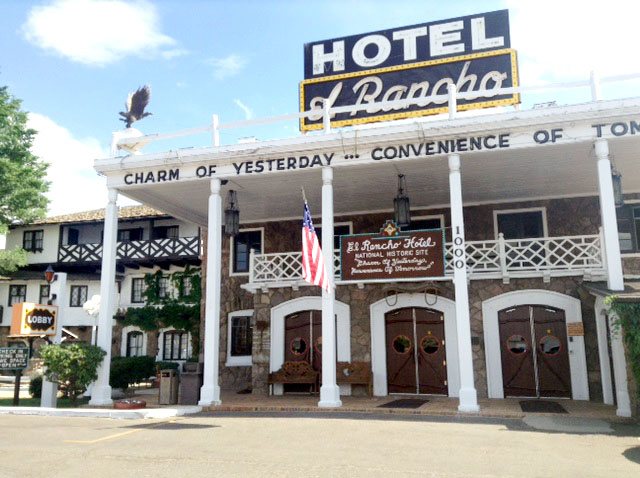 Built in the early 1930's, this is the busiest spot on a Sunday afternoon in Gallup, New Mexico. Hundreds of Hollywood stars have pictures on the walls. Photo by David Freeze.

I crossed into New Mexico this morning, marking the first time that I’ve ever been to the state. So far I like what I’ve seen.

This morning’s ride of 52 miles was from Chambers, Ariz.,  to Gallup, N.M. For most of the today’s ride, Route 66 or remnants of it ran along beside Interstate 40. The first time I turned onto 66, I had to come back because the road had been taken up and I returned to ride the interstate again. Through the rest of this stretch, the road is mostly there, sometimes looking good and other times bumpy and with grass growing through the pavement.

From what I have seen, New Mexico is going to highlight the historical segments as they go through the towns. My Adventure Cycling map has a statement that says, “Bicycle Route 66 does not always follow Historic Route 66.” I will probably make some mistakes but will use the resources I have to get as close as possible.

A few interesting things happened this morning. The first was an absolutely beautiful sunrise as I rode toward it. I had been told to look for a replica of Fort Courage of F Troop fame. What I found was one of many abandoned attempts to attract the crowd as they drove by. The guard towers looked pretty good but most of the rest of the fort is in major disrepair.

At Lupton, just as I was coming to the Arizona/ New Mexico line, there is a large rock formation that has many holes on the walls and a sign says “Cliff dwellers.” All of this is surrounded by a working truck stop.

The first stop and my overnight home is in Gallup, N.M. Once again, there are signs everywhere relating to Route 66, and there are more motels here than I have seen anywhere else except at Myrtle Beach. Lots of them have shut down after years of working to survive, but dozens still remain.

I took a chance and booked a room at the El Rancho Hotel and Motel. My guidebook calls it the “Gem of Gallup.” Billboards along the interstate for 150 miles have proclaimed El Rancho Motel as combining the glory days of filmmaking and the Old West. Stars like John Wayne, Clark Gable, Alan Ladd, Betty Hutton, Ronald Reagan, Jane Wyman and Jackie Cooper reportedly stayed here, along with lots more stars who frequented what was termed as “Hollywood Southwest.”

This afternoon, I am resting my weary legs and trying to plan for the next few days. California and Arizona did a great job of making it very clear where Route 66 went and giving plenty of opportunities to ride it. New Mexico looks to be a different story. I have two sources with me and neither agrees on how the famed highway traveled through the state. Much of it no longer exists, although Interstate 40 is never too far away.

Tomorrow, I will head for Grants and then Albuquerque a day or so later. Both are proud of their Route 66 links and have plenty to see. New Mexico will have some challenging climbing and lots of open spaces and plenty of natural beauty.

Another new sponsor this year is the Men on Missions from First Baptist Church in China Grove. That is my church, and they do a great job building handicap ramps and other needed community projects.

I am going over to look around the lobby of the famous hotel and find out some more history. It was a nice day today and I hope the worst heat has passed for a while. Out here, there are dry beds that pass under the roads called washes. When the big rains come, these washes handle the runoff. Right now, all are dry and my rain jacket has not been used yet. I’m hoping for no heavy rain, too.

Now, I just need to get the route figured out for tomorrow and the next several days. Check back and see what happens.