Riding Route 66: A very long day with an odd ending 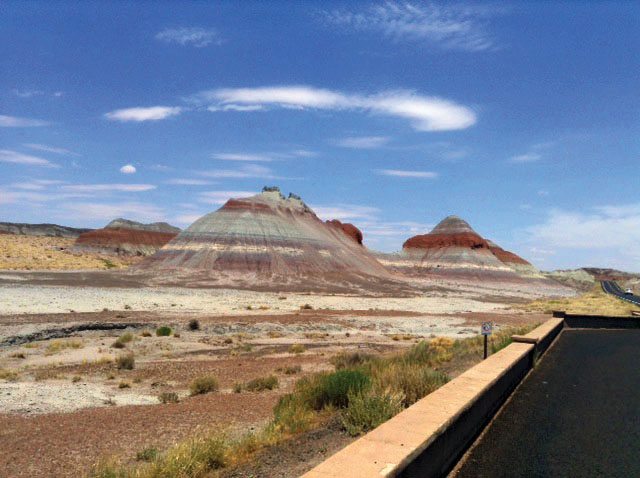 These rock formations were called Teepees. Photo by David Freeze.

Last night, I couldn’t decide what plan to go with for today. Finally, I just prayed about it and went to bed. The quandary was how to see the Painted Desert and the Petrified Forest and still make it to a motel in Chambers. I knew it would be a tough day if all that could be accomplished.

I spent last night in Earl’s Motor Court in Winslow, Arizona, and had nice time in a wonderful room from the late 1940s. It still had an old Hotpoint refrigerator and it worked better than lots of new ones. I had a pleasant talk with the owner and got a few tips from her for today’s travel. It was fun to be standing on the corner … then sleeping not too far from the corner.

Now, here is how today developed. I left at 5 a.m., hoping to do everything. The first part was easy with some travel on Interstate 40. I stopped at what used to be the Jackrabbit Trading Post and got a picture of one of the most iconic road signs along Route 66. The signs depicting how many miles to Jackrabbit until you were finally there were fun for those driving along the iconic road.

I kept going to Holbrook and joined Route 66 going through town. As far as I could tell, this was the only relevant section that is still being used that I saw today. Holbrook still has a Wigwam Motel, which is just what it sounds like. There is a row of Indian Wigwams set up and it looked like a lot of people spent the night in them last night. I wished I had the opportunity on this trip to stay in one. I did see some dinosaurs in town with a sign on one that said, “Take personal photos at your own risk.”  I just now read that the owners expected a fee for taking photos of the dinosaurs. No one was around when I went through, so I got mine for free.

Then came a long and warm 18-mile trip out to the Petrified Forest National Park. I had a nice talk with Park Ranger David Harmeil just before entering. There is a visitor center on each end of a challenging (on a bike) road through the park. At first, I saw lots of petrified trees. The funny thing about them is that they are all cut up, like it was done with a chain saw. The largest percentage of the petrified stuff was early in the ride. Then, with lots of hills, I began to see large and amazing rock formations showing the different colors and layers of composition.

But the most surprising thing was up to this point, there had been nothing to see of the Painted Desert. Then, in the last six miles, I saw huge views of rock formations of different colors and many appeared to be changing as the clouds and sun took different angles. All of this reminded me of a similar sight in the Wind River Canyon in Wyoming on my cross-country ride. You can actually see some of the Painted Desert from Interstate 40 but it well worth the visit to this National Park to see it up close. The view is similar but different from the Grand Canyon, and like my good friend Wayne Crowder said, “It is so hard to describe, you just have to experience them.” This park would be great to experience sunrises and sunsets over the Painted Desert, but the park is not open at those times. Route 66 used to go through the park that was established in 1906 and designated a National Park in 1962.

Totally worn out from a hot day that included 103 miles of cycling and lots of up and down hills, I had called the Days Inn in Chambers a few hours before to make sure they had a room. I had previously called the night before and got a rate but didn’t book it because I frankly didn’t know if I could get here. When I did get here, they had the room and a much higher rate. It is a long story and too much to tell here, but it is the very first time in all of my travels by bike that someone has done this. I will just take it as a lesson learned, write a review online and move on. Just know that my blood was boiling during an all-out argument with this person and in front of what looked like several of his staff.

Tomorrow has not been planned yet. I am in a motel with no town and only a high-priced convenience store and a restaurant. Just a good time to gather my thoughts and plan for tomorrow. If all goes well, I will enter New Mexico. There is lots to read and some decisions to make, just as at the end of every day. So, check back tomorrow and see if I get out of here without another confrontation. See you then!