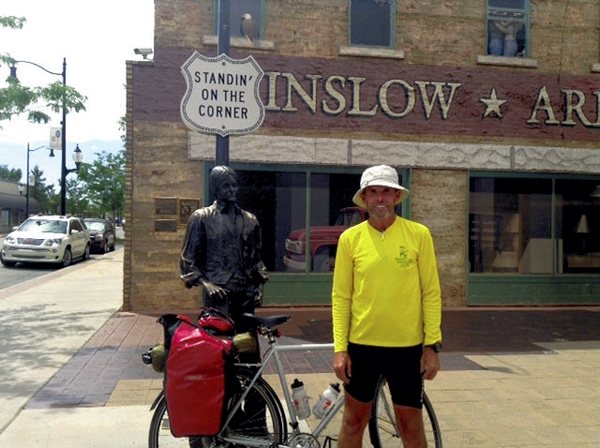 Standing on the corner of Winslow, Arizona. Photo courtesy of David Freeze.

Riding Route 66: Standing on the corner of Winslow, Arizona

Yes, I am in Winslow, Arizona, after another good day. I spent the night in Williams at the Hollander Motel, one of the best I have used during my travels. I had everything I needed, which is not always the case. Before turning in for the night, I was able to watch yet another gunfight and the little town was alive and making me wish I didn’t have to go to bed so early.

A big disappointment happened late that evening as well. Gary and Sylvia Ritchie, owners of Gary’s BBQ in China Grove, were in Williams as well. They knew that I was on the Grand Canyon train and tried to find me as it unloaded. Somehow, I slipped through and they left a cell message that I didn’t check until too late. It would have been good to see them this far from home.

I left out early again, knowing that there was climbing to do and a long way to Winslow. I rode through Flagstaff and liked the town. However, I got lost for the first time on the trip and rode about six extra miles before getting back on track. Flagstaff has lots of Route 66 motels and restaurants. One footnote about Flagstaff is that Cecil B. DeMille originally considered making movies there instead of Hollywood, but on the first day he visited, snow was falling. The rest is history.

Then came a lot of desert riding on Interstate 40. Route 66 in this area was replaced by the interstate and the roads were made bigger and wider. There were a few unusual sites today, but one that I passed by. There is a meteor crater about six miles off the interstate that has been the source of much discussion for years. The meteor is said to have crashed into earth going 45,000 miles per hour and left a crater 570 feet deep, a mile across and three miles in circumference. I saw the Grand Canyon yesterday, so this one was not worth the extra 12 miles of riding.

One unique thing I did see was the abandoned tourist complex at Twin Arrows. It is also right beside the interstate. What is left are some abandoned buildings and two giant arrows in the ground.

Now back to Winslow. The town has latched onto the Eagle’s classic song “Take It Easy” for all its worth. The famous corner is at Kinsley and Second Street. There is a statue with a flatbed Ford parked in front and a mural of the girl on the wall. Of course, that was my first stop in town. There is an effort to revitalize the downtown area that includes 2nd and 3rd streets that has a ways to go. I will check it out more tonight.

Tomorrow needs to be planned. I do expect to see the Painted Desert and also the Petrified Forest. I will again be on 40 for part of the day but am not sure yet. I topped out at an elevation today of 7,350 feet, the highest elevation for all of Route 66. Total distance was 102 miles but that included getting lost. Plus, I don’t think it hit 100 today.

One interesting tidbit is that Arizona doesn’t have many rest areas, but they do it right when they decide to have one. I stopped at one just before Winslow and it was amazing with probably 20 brick-walled covered open air shelters to take advantage of the breeze and block the sun. The next one is about 135 miles away. I might see it too.

Another new sponsor for this year’s ride is Dr. Tanya Williams, DDS. She is my dentist and does a great job and is located right beside the tax building in Salisbury.

With that, I will get going on planning tomorrow. New Mexico is getting closer. Once again, thanks for riding along.

Pair charged with marijuana possession after calls about drug activity