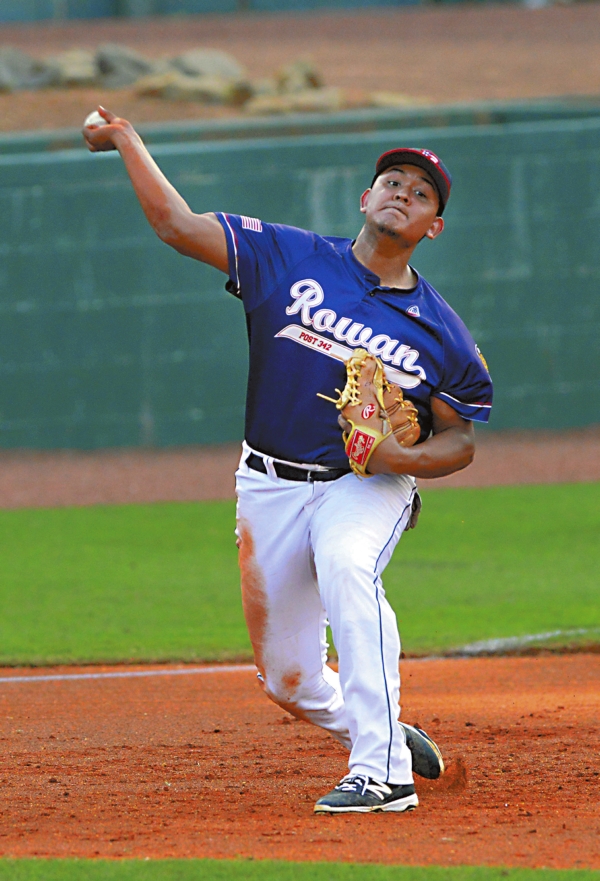 Wayne Hinshaw/for the Salisbury Post ... Rowan third baseman Juan Garcia makes a throw to first base during an earlier game this season. Garcia was key in Rowan’s 9-7 win over Davidson County, last night at Newman Park.

SALISBURY — Brett Graham’s hadn’t pitched in a game since April 22, but he headed to the mound in the middle of a jam in the seventh inning and saved a victory for Rowan County and starting pitcher Joe Harrison.
Harrison and Graham got it done on the mound and Rowan held off Davidson County, 9-7, at Newman Park on Friday night for its sixth straight win.
It was the Senior Legion mound debut for Graham, who went 1-0 in four relief appearances and threw eight innings for West Rowan High during the prep season.
“It was on the board that I would be going into the game around the sixth inning,” Graham said. “I figured I was going in at shortstop or second base. It was a little bit of a surprise to pitch because I haven’t been throwing much, but I was glad I could save it for Joe. Joe pitched a great game.”
Rowan coach Jim Gantt said Harrison was “the story of the game,” and he really was.
Harrison gave up three runs in the first inning, but the young left-hander came back. He put zeroes on the board in the second, third, fourth, fifth and sixth and allowed Rowan (16-7, 6-0) to take an 8-3 lead.
“Joe knows his stuff and he did what he does,” Gantt said. “He had some good hitters out on their front foot and off-balance.”
Rowan third baseman Juan Garcia also was a big part of the story. He had three hits and made tremendous defensive plays. He showed great range in the sixth, scrambling into the hole to deny a base hit.
Garcia graduated from West Rowan in 2015.
“I played in a league over in Charlotte and I worked out a lot at the Forum for cardio and agility to get in shape for this Legion season,” Garcia said. “But I still got off to a slow start.”
Garcia hammered a lot of line drives at fielders early this season, and then he encountered back and hip tightness that kept him out of the lineup, but now he’s starting to look like the same guy who batted .426, scored 43 runs and led Rowan’s 2015 state-championship team with 44 RBIs. He was a terror offensively and defensively on Friday.
“I’m looking at colleges where I could walk on and continue my studies and play baseball,” Garcia said. “Hopefully, this isn’t my last baseball.”
Rowan started its comeback in the bottom of the first against Davidson County starter Noah Jarrett, a homeschooler who pitched for Rowan County last summer.
Hunter Shepherd tripled and scored in the first to cut Rowan’s deficit to 3-1. Dalton Lankford scored on a wild pitch to make it 3-2 in the third.
Davidson County’s defense unraveled in the fourth as Rowan scored three runs to take a 5-3 lead. Lankford had a run-scoring single.
Rowan pushed the lead to 8-3 in the sixth when Garcia came through with a two-out, two-run single to right-center, the biggest swing of the game, and Seth Cauble followed with a loud double off the left-field wall.
“I’ve been thinking up the middle and about staying in my gap, and I’ve been swinging the bat better,” Garcia said.
Rowan stayed with Harrison a long time on a warm night for a lot of reasons and found out the kid is pretty tough. Davidson was coming through the lineup for the fourth time in the seventh, and good hitters had made adjustments. Harrison almost made it through the inning with that 8-3 lead, but with two men out, Landon Michael and Cole Beeker got hits to make it 8-5. Rowan still stayed with Harrison. He got a routine ground ball to short, but an error allowed two more runs to score, and it was 8-7. That’s when Rowan turned to Graham.
“I didn’t have my best off-speed stuff tonight,” Harrison said. “But I was able to throw strikes and guys made a lot of plays behind me. I’m just glad we got the win.”
Lexington’s bullpen did a nice job, but Rowan got a big insurance run in the seventh to make it 9-7. Leadoff man Chandler Blackwelder was hit by a pitch and worked his way around the bases with a steal and two wild pitches.
Graham walked one in the eighth and another in the ninth, but he didn’t allow any hits. There was one rocket that second baseman Tanner File snagged in the ninth, but Graham looked sharp enough that Rowan added another capable arm to the bullpen.
“There were some mistakes made by both teams, but it it was still a good game to watch,” Davidson County coach Dan Tricarico said. “Rowan County’s pitchers did a nice job tonight, but we’re going to be OK. We play in a very tough division, but we’re going to win our share.”
•••
NOTES: North Rowan third baseman Holden Lanier batted fifth for Davidson County (6-8, 5-4) and whacked a double that Blackwelder nearly caught at the center-field wall in the first inning. … Rowan still has to cut two players to get down to the 18-man limit and today is cut-down day. Gantt would love to keep all 20. … Strong-armed catcher Pearce Wilhelm got a start on Friday and had four good-at bats. He had two hits and a walk. … Michael, one of the stars of North Davidson’s 4A state champions, had three of Davidson County’s nine hits. … Rowan plays two games at Shelby today, including a 10 a.m. affair against Gaffney, S.C. Gantt joked that he considered getting thrown out, so he wouldn’t have to make the trip. The bus will leave Newman Park at 7 a.m.