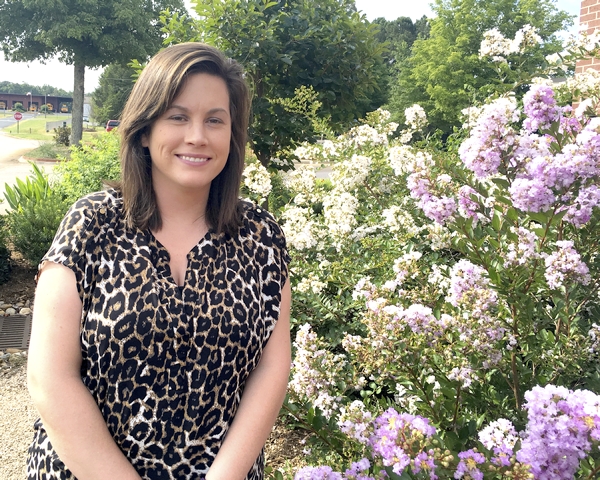 Watts is originally from Dallas, N.C., in Gaston County. Watts’ background is in agriculture and livestock. She grew up as a 4-H member and competed in livestock judging and showed animals. Watts says she has shown practically everything but a cat. She has worked extensively with goats and sheep. She is looking forward to managing the 4-H lamb project.

Watts considers being an agriculture extension agent to be her dream job. Prior to coming to Cooperative Extension, Watts was an agricultural education teacher and FFA adviser in the state for two years.

Watts’ says her goals for her position and the community are “to help and educate farmers about modern technology and practices while also getting more youth involved in agriculture.” Watts emphasizes the importance of youth by citing that the average age of today’s farmer is 58 years old.

In just over a month on the job, Watts has been near and far within the county and the state. Watts has done several farm visits and tours. She attended a Farm School session and completed a wheat yield test. Watts has also written articles on her activities and spoken about them on the radio. She attended training in Swain County last week. Currently, Watts is attending the North Carolina Association of County Agricultural Agents Association meeting in Nags Head. She is also in the works of building an advisory board.

Watts is leading a Summer Fun program for 5- to 8-year-old children called Farmers and the Environment. Participants will learn how farmers help the environment and how farmers recycle. They will create a project to take home with them. It will be held on July 11 from 9-11 a.m. at the Cooperative Extension Office. This program is new. To register, one must come to the office between 8:30 a.m. and 4:30 p.m. with an insurance card and the class fee of $10.

Watts is eager to meet all of the citizens, producers, and growers in the area. She encourages members of the community to stop by the office to meet her or give her a call at 704-216-8970.